Does anyone know anything about this poem

My near 80 year old mother remembers having this poem recited to her by her mother as a young girl. She remembers a great deal but there are some gaps. Is anyone able to place it in context or provide more information? We suspect it dates to World War I era. The following is an incomplete and possibly inaccurate transcription of her memory. In particular, was Senlis surrounded by an area with the pronunciation of Ardefine at the time?

I cannot find anything on the poem itself, but Gustave Chatain is a well known French World War One historical figure who enlisted surreptitiously at age 14, received commendations, and rose to the rank of corporal. Here he is in a publicity photo with Foch. 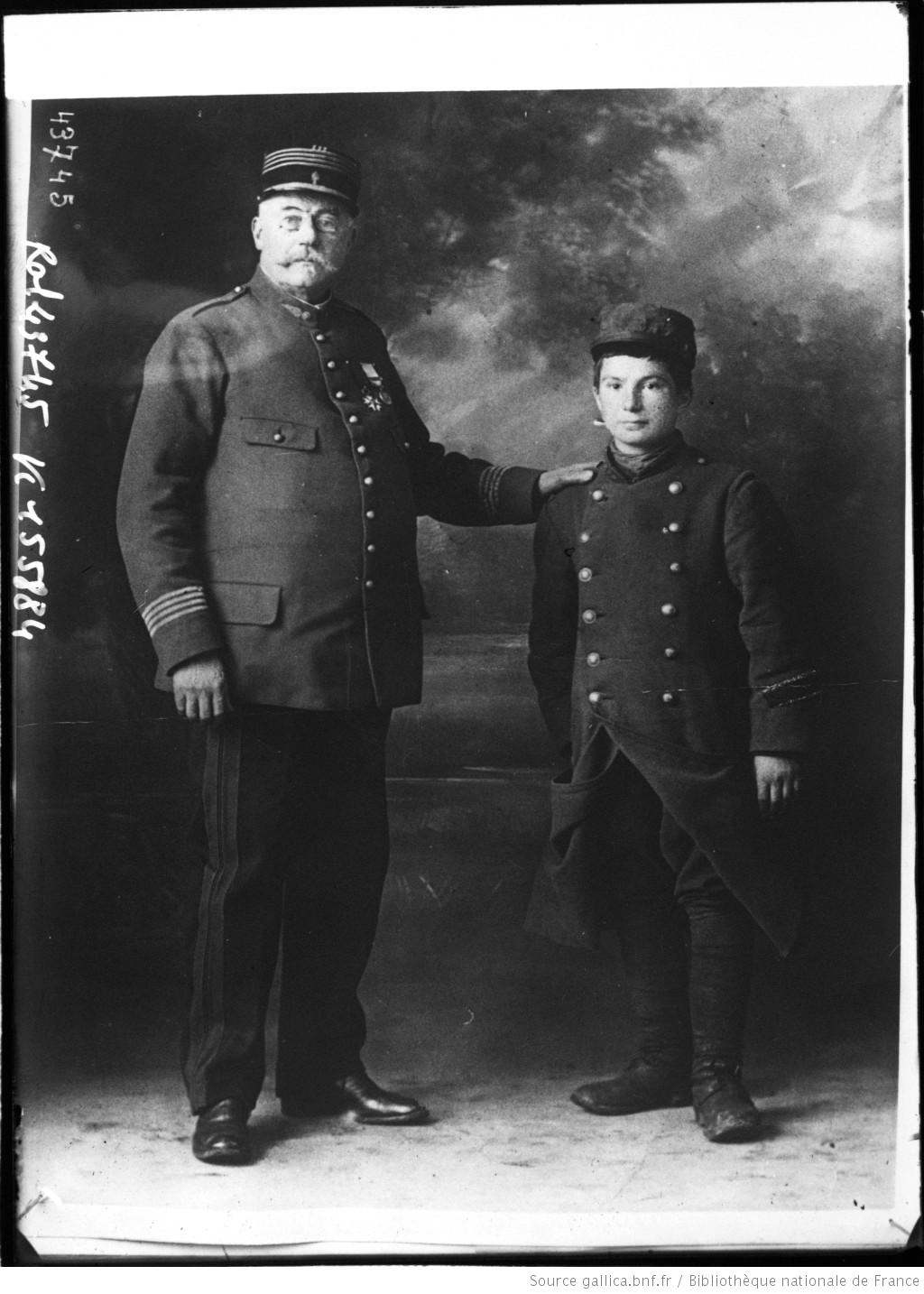 The first of three tales in this booklet tells a (somewhat fanciful) version of Gustave's enlistment and heroism in capturing seven Germans sleeping in a barn.

So he crept softly up the ladder and saw seven "Boches" lying fast asleep on the floor, where they had spread out beds of hay for themselves. The fearless boy brought down the butt-end of his rifle sharply on the floor and awakened them. Then they all sat up suddenly, looking very much alarmed.

Gustave ordered them to stand in a row as if at drill. Then he called to his companions, who were greatly amused and astonished to see seven big German soldiers holding their hands above their heads, while the gallant French boy stood looking at them with a stern, proud face. They raised a cheer for Gustave and called him a hero.

Here is another more complete retelling, in French, of Gustave's adventures. 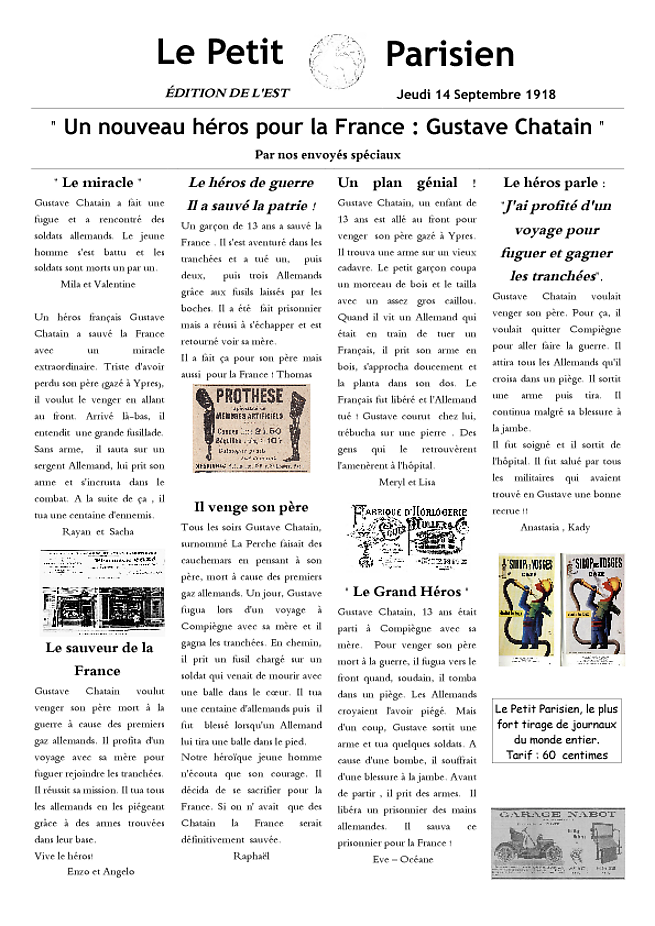 And another from the Journal du Loire 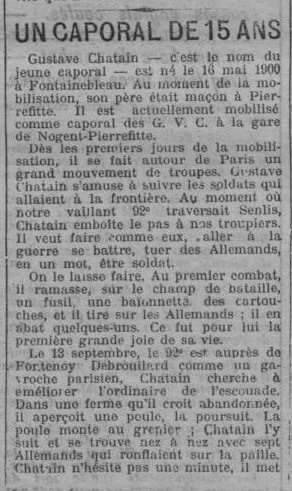 Fontenoy is in Belgium on the border with France, roughly 25 km NW of Mons and about halfway to Lille, and the site of a famous French victory in the War of Austrian Succession. This was the NW end of the Battle of the Frontiers in August 1914, when five German armies advancing through the Ardennes defeated French and British forces, driving them south towards Paris.

Senlis is a short distance NNE of Paris, at the very north end of French lines during the French/British victory at the Marne that drove German forces from Paris back into Belgium. 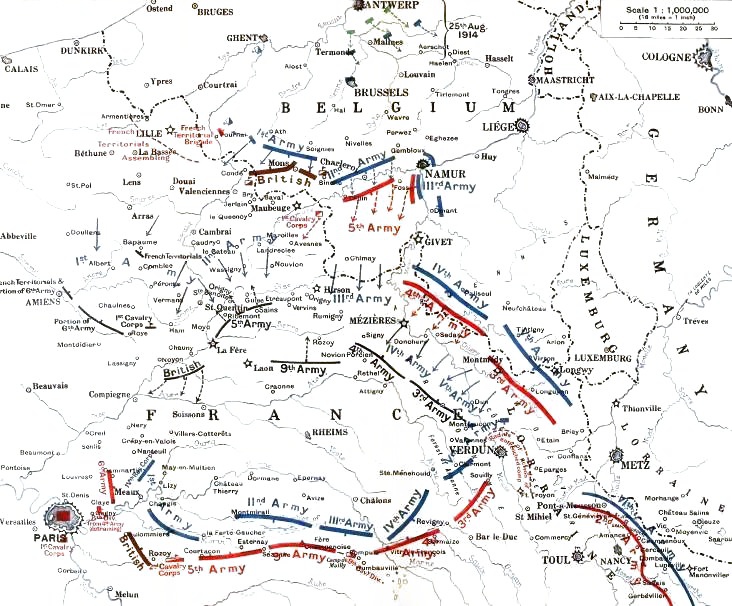 I have found two possibilities for the "Ardefine" reference in the song. Neither one quite fits, but for completeness here they are:

This is rank speculation, since I couldn't find a copy of the poem, but I'm going to guess that your mother's "Ardefine" is actually "Ardennes fine". I believe the final "s" is silent, and of course "fine" can be synonymous with "beautiful".

The Ardennes is an area of forest, rolling hills, and other rough terrain running along the southern border of Belgium. The two towns mentioned, Senlis and Fontenoy are in France (NE of Paris) and Belgium (South Central) respectively. While a direct march between the two would probably go through a border forest, technically that would more likely be the nearby Scarpe-Escout, but that wouldn't have been as famous (and wouldn't have scanned as well in a poem). Alternatively, I suppose they could have marched in through the Ardennes, and then come in to Fontenoy from the East.

Not the answer you're looking for? Browse other questions tagged world-war-one england france or ask your own question.