How long did men have to serve in the US army until they were promoted to sergeants during WW2?

During the Second World War men rose through ranks much quicker than they do today due to heavy losses and they went from private to corporal and corporal to sergeant after serving only a small amount of time.

But how much time was that, approximately? A few months? A year? Two years? Or perhaps more/less? I'm interested in the US Army after the US joined the war so think 1941-1944.

Your question is premised on some incorrect assumptions:

So if you are wondering what sort of new recruit in Spring 1942 might get promoted to Sergeant by sometime in 1944:

Note that the biggest percentage, and thus most difficult, growth in the size of the U.S. Army had already occurred by Pearl Harbour: roughly eight-fold from just 184k in late 1939 to 1,142k in December 1941. It would double and a bit in 1942, double and a bit again in 1943, and only increase by another 14% in 1944. Most of the senior sergeants and warrant officers required by 1945 were probably already in uniform by late '41 or early '42. 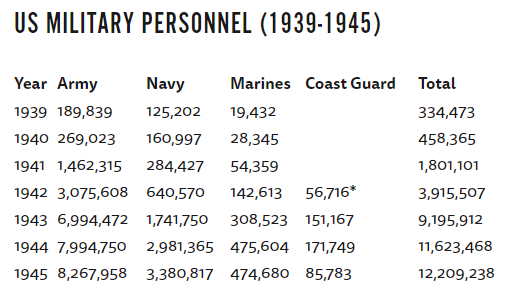 Not the answer you're looking for? Browse other questions tagged united-states world-war-two military war 1940s or ask your own question.

30
Was the Italian campaign a strategic mistake?
2
Examples of internment or deportation of enemy aliens in the US after WW2?
1
How did the increase in the birthrate and marriage impact on US homefront during WW2 (1939-1945)?
4
Was the US Army during the WW2 Western Front a motorized army, a mechanized army, or neither?
11
How could black men serve as officers in the US army during segregation?
10
How much time did people have to take shelter during the Blitz in 1940-41?
11
How did the Swedish army deal with prisoners of war in the Thirty Years War?
6
What was the Soviet reasoning for developing their Airborne Forces (VDV) into a powerful military branch?
9
What WWII fighter raid did my great-uncle misremember?
7
How did East Indies oil lose its "top billing" in the Pacific War as the war went on?