What were the rules of the migration to the Louisiana Territory in USA?

To my best knowledge, at the point of Louisiana Purchase, the area was inhabited mostly by Native Americans. At the time there existed some legislation regarding how the settlement should look like. The latest, at the time, was the Land Act of 1804. However, it applied only to the territory to the east of the Mississippi River. I can I am wondering what were the rules applying to pioneers travelling further to the West. Did they have some support of the government, did they have to pay for the land?

I am asking about the first settlers, not necessarily the people that visited this area at the time (e.g. to explore it or hunt) but the ones that have built their houses, set up farms etc. Those who have funded this infrastructure.

The period I am interested in is after Louisiana became USA territory. Specifically, the US government take on managing them. If no one cared about what was happening there, it is a fine answer. However, I would like to see the sources stating that.

The question seems to assume the existence of immigration controls, which are a fairly modern invention. The first US law restricting (voluntary) immigration in any significant way wasn't passed until 1875*. Prior to that, the general process in the Americas was to control naturalization (citizenship), but not immigration.

Of course anyone wanting to live in a territory has to make arrangements with the communities already living there to respect their settlement. While New Orleans was a proper European-settled city, immediately becoming one of the 10 largest cities in the United States upon signing of the Louisiana Purchase, the rest of the Louisiana territory was, as you say, much more sparsely inhabited.

Prior to the Purchase, the primary settlement pattern for most people in the Mississippi River Valley west of the US border was Native American nations following the old Mississippian ways of life, which involved maize agriculture supplemented with hunting.2 They were willing to accept the nominal theoretical suzerainty of colonial Euorpean powers like France or Spain, because effectively that boiled down to the colonial governor periodically giving them gifts, and a general availability of trade (particularly guns) at the cost of some small amount of meddling by his small and intermittently effective garrisons in a few scattered forts. A smart ruler could convince the Governor to meddle with his enemies, and not with his own tribe. Otherwise they mostly occupied themselves with agriculture, hunting, and warring with each other for territory, as they always had. There was perhaps a bit more of the latter than normal, due to eastern tribes getting squeezed out of the territories in the US, and being forced to move west.

Most of the people of European descent living in the territory at this time were either working for the Territorial Governor in some capacity, or trading and living with the Native nations (which implies some level of assimilation).

After the US took over, everyone knew this was going to change. While Spain and France were mostly interested in extracting money from their territory at minimum cost to themselves, the US was looking for land for their European-descended citizens to colonize and farm. Spain and France were weak and far away, while the USA was right next door, far too strong for any one native nation to fight, and getting stronger every year.

The general precedent for how to settle unsettled US territory was set down in the Northwest Ordinance, one of the last acts of the Continental Congress prior to the US Constitution's adoption. The general idea is that unorganized land gets surveyed, subdivided, and then sold to individual buyers for settlement, with certain amounts of territory set aside for administrative purposes, like government buildings and schools.

In theory the territory of native nations was supposed to be respected and left alone. In practice settlers would squat on that (relatively) free land until the natives got sick of it and tried to use force to expel them. At that point the squatters would complain to the nearest US Army fort, or failing that their territorial political leaders, until they found someone willing to defend them and their illegal settlement against the natives. Considering those territorial political leaders were elected by settlers, they didn't have much choice but to agree, no matter what the technical legalities of the situation were.

That's assuming the native nation wasn't sharp enough to see which way the wind was blowing, and negotiate themselves some territory further west that white settlers weren't currently interested in. This is how pretty much every surviving native nation in the eastern half of the continental United States managed to get themselves dumped into increasingly smaller slices of Oklahoma. 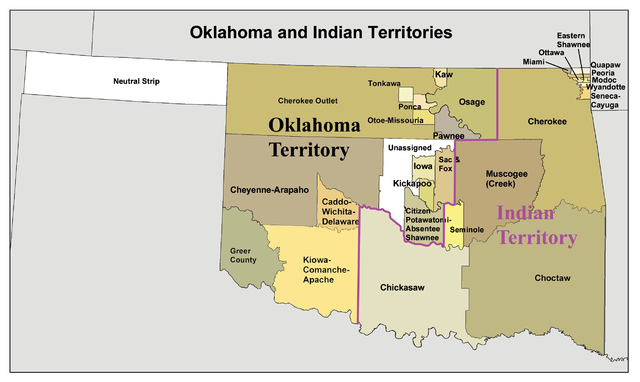 1 - By this time, all of the Louisiana Purchase had already achieved statehood, with the exceptions of Oklahoma, Wyoming, Montana, and the Dakotas.

2 - For those with access to the Great Plains, this meant seasonal horseback buffalo hunting.

Not the answer you're looking for? Browse other questions tagged united-states 19th-century law colonial-america migration or ask your own question.

31
Why did the French sell Louisiana?
12
What was the basis for valuating large territorial purchases by USA?
15
Why did the states that were born out of the Louisiana purchase adopt a common law system, and not a civil law system?
3
Were there more robberies of "commercial" or "personal" nature in 19th century in USA?
2
What were the most important causes of the 1692 Salem Witchcraft Trials?
3
What were levels of insular migration like in pre-Industrial Britain (1650-1780)?
37
Is there a historical explanation as to why the USA people are so litigious compared to the French?
35
What is this symbol in a financial record from Wisconsin, USA, in 1860?
0
Were there duststorms in Louisiana in the 1930's?