I am trying to identify a reference for a quote attributed to Otto von Bismarck.

English Google translation: "How much the pressure of the resistance weighed on him [Otto von Bismarck] showed that morning confession that he had lain awake the whole night and "just hated"."

I am interested in knowing where OvB made that "just hated" statement.

Below is the email I received from Prof. Ulrich Lappenküper, managing director of the Otto-von-Bismarck-Stiftung, in response to an email I had sent (following the advice given by @MarkJohnson in his post, and @LangLangC in one of his comments). Prof. Lappenküper was very kind in responding within a few hours.

Mit freundlichen Grüßen (and best greetings to Australia)
U. Lappenküper

So it appears that the conjecture of Tiedemann being the source of this quote which has been articulated by various respondents to this post, is a correct one. Also note Prof. Lappenküper's comment that the quote is part of an undated conversation between Tiedemann and Bismarck.

The earliest reference I could find is Christoph von Tiedemann on p. 42 of Persönliche Erinnerungen an den Fürsten Bismarck (S. Hirze, 1898, link) based on a 1897 talk:

Von Tiedemann knew von Bismarck personally and spent a lot of time with him. The information when von Bismarck said that is missing.

This source was also mentioned in the article Bismarck Posthumus on p. 161 of Theodor Barth's Die Nation (volume 16, 1899) in which the above book (published 6 months before von Bismarck's death) is talked about. It contains the following

Hatred being as fruitful as love. But they may have conflated two different conversations. Von Tiedemann mentions von Bismarck's opinion on love and hate on p. 5.

It's not always clear which sources the author used (they even just index the "most important sources" (Verzeichnis der wichtigsten gedruckten Quellen, pp. 243-244)), but they mention von Tiedemann in the paragraph before, so he seems to be the source again. Interestingly, one of the more important sources was Erinnerungen an Bismarck. Aufzeichnungen von Mitarbeitern und Freunden des Fürsten, which may shed more light on the issue (see below).

I have my doubts about it. The snippet from p. 216 of the 1915 edition again mentions Tiedemann first and then introduces the quote the following way:

This is kept very general and there is no indication that Schweninger is the actual source. It just happens to be in the Schweninger chapter of that book (the other mention of that quote on p. 218 is not clearer).

Thanks to LangLangC, I got access to the full book, not just a snippet. A bit more context from the above mentioned p. 225 of Graf Hugo Lerchenfeld-Koefering's Erinnerungen und Denkwürdigkeiten: 1843 bis 1925 (E. S. Mittler & Sohn, Berlin 1935):

From the context around it, the quote this time seems to be used to illustrate von Bismarck's anger (Zorn), not insomnia. No source is given (if 15) Lerchenfeld refers to endnote 15 on p. 437, it's not about that.). I want to add what von Lerchenfeld-Koefering writes on p. 217, the beginning of the Bismarck chapter:

The book was written 27 years after von Bismarck's death. It's possible that the family said something like that, it's also possible that he misremembered it.

3) Inspired by the quote

Gustav Stresemann was also fond of quoting Bismarck's statement, like on May 30, 1924 in Berlin as reported by Edgar Vincent, 1st Viscount D'Abernon in Chapter II, p. 68 of An Ambassador of Peace (pdf download):

He went on: "In other countries the successful conduct of foreign affairs brings about confidence in the Minister. Here it only produces envy. Of the members of the old Government, the only ones who are willingly accepted by the Nationals are those who are the least important. One of my old colleagues never understood what was going on either in the Cabinet or in his Department - he is the one they acclaim. Events like this which are now going on make one realise what Bismarck meant when he said,'Ich habe die ganze Nacht gehasst.'"

Note that this answer was written before "Update 2" in the question appeared.

It seems to be an anecdote, reported only one single time, as "he once said", by one source, undated. It is of a singular nature, not repeating. In that single source it has no relation to any specific occasion and is even phrased with ambiguity, possibly even with an intended humorous effect.

It seems to be reported first by Tiedemann in a speech in 1897 and after Bismarck's death this seems to have spiralled out of proportion. That some admired or despised Bismarck as 'a hater' made for a well fitting 'quote' in both cases. But Bismarcks own words – even if correctly recorded by Tiedemann – make for very slim evidence to diagnose his character as 'frequently insomniac and busy hating through the night'. But the single source Tiedemann is not of unlimited value anyway, so this quote has to be read with a certain pinch of salt at the ready.

Since the beginning of the 20th century this 'quote' makes the rounds.

This was found attributed to him,

Could we prove at least some of these at the real source? For example in his letters and/or Tiedemann's memoirs which are for a large part online at archive.org (example). Although mostly written in fraktur and catastrophically OCRed.

That he might have said this in various forms ("gehaßt"/"durchgehaßt)", might sill be true. But another possible explanation for that could be that he simply said it that often, varying it himself. And that then being recorded differently and even accurately in different sources. But that seems not to be the case.

If it's in his diaries in one form, in a letter to his wife in another, in memoirs of Tiedemann in yet a third, then we would have three primary sources, two of top quality.

One such source is indeed 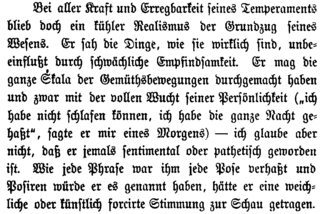 That scanned image shows what Prof. M Lappenküper's, from the Otto-von-Bismarck-Stiftung, believes is the main source. It reads:

Translation: Despite all the strength and excitability of his temperament, a cool realism remained the main feature of his nature. He saw things as they really are, uninfluenced by weak sensitivity. He may have gone through the whole range of emotions with the full force of his personality ("I couldn't sleep, I hated the whole night," he told me one morning) – but I don't think he ever became sentimental or pathetic. Like every phrase, he hated every pose and would have called it posing if he had displayed a soft or artificially forced mood.

That is a Tiedemann source, which Lappenküper thinks is reliable (seriös). But in this same pamphlet Tiedemann is freely admitting that it is a vague and fading memory from long ago. He kept a diary, but he doesn't get into specifics regarding the date or opportunity for this quote. Just "he once said it".
For comparison: In this same source Tiedemann goes into some vivd details regarding certain dates and affairs. The context of the 'quote' also makes it clear that Tiedemann is actively knitting towards a legend of his liking. Including hyperbole in anecdotes.

A note on the translation:

This is ambiguous in the original. It could as well mean that he could not sleep and (that because he) was busy hating during the night. But equally that he couldn't sleep that night and that (therefore) he hated the (sleepless) entire night itself. Meaning it was just a terrible night. Without more context, this seems undecidedable from the source. Even if the 'hating' reading should be the better fitting one, it cannot be excluded that this was meant as a joke.

I didn't check Bismarck diaries. In Bismarck's memoirs he uses 'gehaßt' exactly one time, not related to his nights, but describing other people's attitudes.

A cursory reading does not reveal this quote to me, but quite some instances of him not complaining about sleeplessness. Instead we find examples describing how he sleeps "long" (Potsdam 14. Nov 1848) or "11 hours…" (when on holidays) or "not long but well" (Petersburg 3. May 1873). That he always (or at least frequently) 'hated through the night', and wrote that at least once to his wife, seems not true. As ups and downs come and go, he reports of occasional difficulties sleeping and also ample sleep over the years.

But if Tiedemann in this version just cited is the only source for this 'quote' than it can be called justly: 'maybe a true report of a personal witness' – and a legendary anecdote without further merit regarding Bismarck himself as well at the same time.

As a contemporary recension of this work remarks without all irony:

But how much more intimate is the connection in which Tiedemann stood with Bismarck, and how much finer and nobler he knows how to reproduce the changing images of Bismarck's day's work, how he complains and moans after sleepless nights, eats and drinks enormously, chats ravishingly, drives up like a lion, and then can probably be unapproachable and dangerous, and yet again and again into his 'real ruler's' mood of the balanced tension when willpower returns. Thus a truly heroic impression, because the effect of the good heroic epic is also based on the fact that we have a hero not only in his main and state actions, but also in all his humanities.
–– Historische Zeitschrift, 3 / 7 / 103, 1909 (my translation and emphasis)

One other source that might be reporting this independently from Tiedeman might be Ernst Schweninger: "Blätter aus meiner Erinnerung" in: Erich Marcks & Karl Alexander von Müller (Eds): "Erinnerungen an Bismarck : Aufzeichnungen von Mitarbeitern u. Freunden des Fürsten, mit e. Anh. von Dokumenten u. Briefen ; In Verbindung mit A. v. Brauer / gesammelt von Erich Marcks; Karl Alexander von Müller", Deutsche Verlags Anstalt: Stuttgart, Berlin, 1915. (p 177–222, esp 216, 218). But this late source is noticeably different from what Schweninger wrote himself in: Ernst Schweninger: "Dem Andenken Bismarcks : Zum 1. April 1899", S Hirzel: Leipzig, 1899. In the early pamphlet Schweniger makes no mention of the sought after quote. That would make it all the more likely that he or the editors updated that memory, possibly again based on Tiedemann.

Answering the title question "Where did Otto von Bismarck say “laying awake all night, hating'?" one can only say with certainty: in Tiedemann's memory. How reliable that witness might be in that regard remains debatable. How much this one source contaminated the recollections of other sources coming after him is uncertain. We do not get to know from Tiedemann on what occasion this might have happened.

Bismarck is very famous for his quotes, but even the Otto-von-Bismarck-Stiftung has no complete summary of them (at least online).

Asking them would be your best option for a reliable result, since his quotes are often used out of the original context.

Not the answer you're looking for? Browse other questions tagged germany quotes imperial-germany or ask your own question.

15
Did Jefferson really say this quote about patriotism?
12
“No sane man will dance.”? When / where / about-what did Cicero say this?
9
When and where did Louis Blanc say the famous “from each according to his abilities…”?
24
Did Louis XIV actually say “The State? I am the State.”? Could he have said it?
9
Where did Metternich say the Balkans began?
19
Did any leader say “We may have lost the battle, but not the war”?
4
What did Thomas Jefferson say about “what I say now is only valid now; I can change my thoughts?”
1
Did Lenin precisely say “Trust is good, control is better”?
7
Where did Wilson state that the US would have to force access to markets with violence?