Who was Chief Poking Fire?

Is there any information about who was Chief Poking Fire? He was the chief of Kahnawake reservation close to Montreal (Canada).

On all the pictures he looks like a person with European descent. Is there any information about this person? 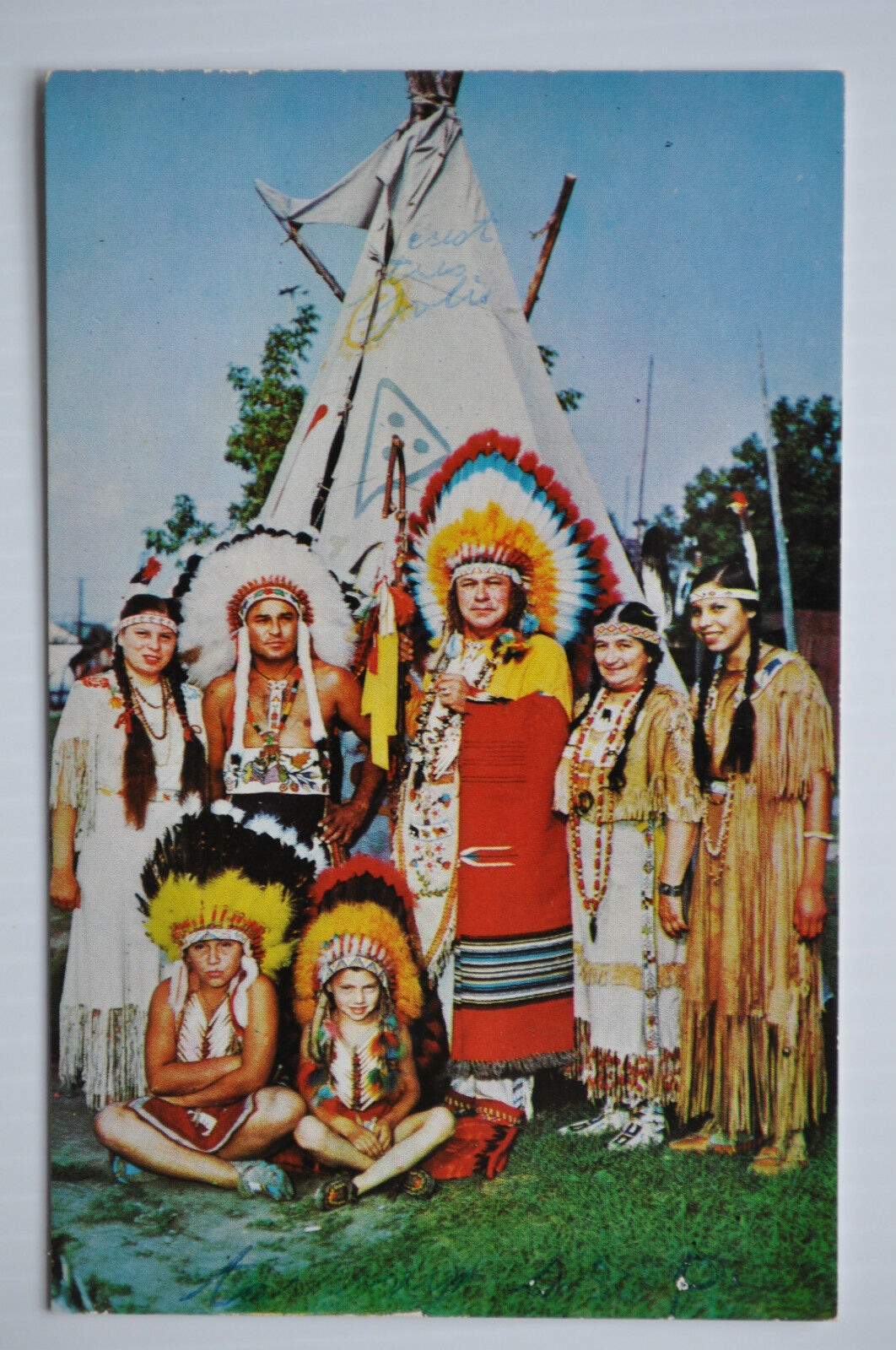 Chief Poking Fire's main claims to fame are probably owning and running an Indian museum, and founding and running a tourist village. He also apparently presented Canadian Prime Minister Mackenzie King with an Indian head-dress in 1948. The story that he was a Ukrainian Soviet WWII pilot who survived being shot down and escaped to Canada to become an Indian chief is pure fabrication.

According to this ancestry page, his full name was Jean Baptiste Sawatis Atsienharonkwas Macomber, and he was born in 1896. More details on his ancestry can be found in John Masiewicz's Gervase Macomber And His 26 Children in Kahnawake. His wife, Louise (or Gathering Words), in addition to assisting her husband in his varied enterprises, was also (as Louise McComber) a nurse's aide and Director of the Kateri hospital in Caughnawaga (this link downloads a pdf). According to both the ancestry page and Masiewicz's book, the couple were married in 1917.

The most straightforward account of Chief Poking Fire is probably this:

The Poking Fire "set-up" was a tourist attraction developed by John McComber, also known as Chief Poking Fire, in the village of Kahnawake in the 1930s. Originally known as "Chief Poking Fire Totum [sic] Pole Indian Village," McComber's enterprise provided visitors with a highly staged representation of Indians as exotic others. 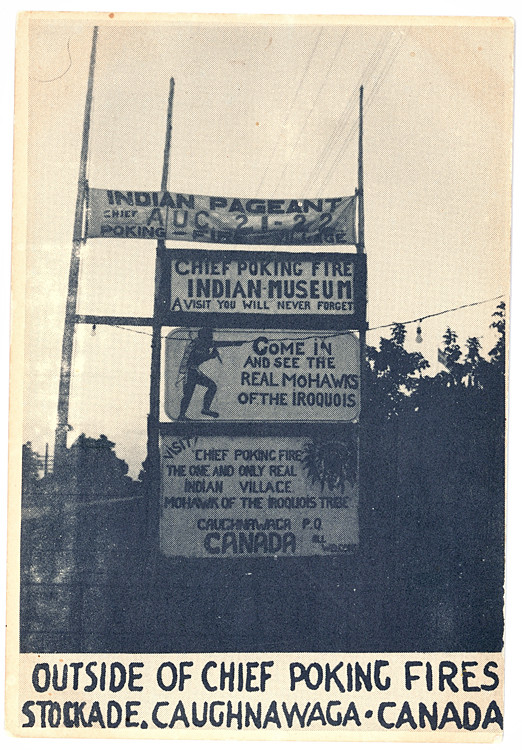 The 1954 article The High-Flying Braves Of Caughnawaga has the following not incompatible account. The real Caughnawaga

laugh good-naturedly at John Macomber assuming the title “Chief” Poking Fire. There hasn’t been an authentic chief of the village since the tribal system of government was abolished by Ottawa in 1890. But, as they point out, there’s nothing to stop anyone from calling himself “Chief,” and Poking Fire has his own little tourist village where he parades around in Hollywood Indian costume to the delight of the tourists and the enrichment of fellow villagers who operate stalls within his compound.

The blue-eyed “Chief” is admired too for the tenacious way he built up his village from a shaky start in 1929 when, with twelve dollars to his name, he refused to ask for government help. Instead he built a wigwam and advertised with a crude sign the Indiancraft he and his wife made—they didn’t have the money then to buy the factory product. Today, thirty-two families take part in Poking Fire’s tourist village, and when the weather is good they do a thriving business.

John Macomber, not to be confused with the Harvard Business School lecturer / businessman, died in 1979, leaving his 'enterprise' to his descendants. Both T.E.D. and jamesfq have noted that some of the attire at least is not of the Kahnawake region (and Poking Fire was clearly in the tourist business with little regard for historical or cultural accuracy), but there seems to be no real evidence that he was some kind of Caucasian impostor.

One story found on the internet is that John Macomber (or John McNober) may or may not have been Ukrainian Soviet air force pilot Ivan Dodoka, supposedly shot down and killed during World War II before escaping to Canada and becoming Chief Poking Fire. He was then discovered, the story goes, by a visiting Soviet delegation who heard the Indian chief speaking Ukrainian. However, pre-war photos clearly disprove this story. For those interested, a film based on Ivan Dodoka's alleged experiences (Firecrosser) was released in 2012. 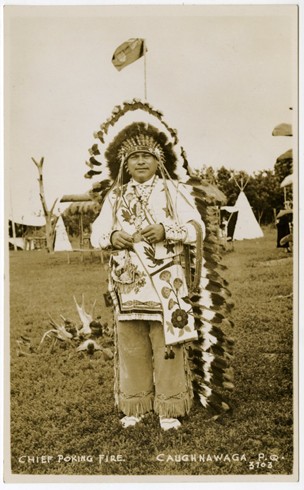 This is my great grandfather and he was definitely not some white imposter. The village was the only place tourists would come, and the people of the village had the opportunity to sell goods and make money. This could have inspired our Pow Wow that we have every year here in Kahnawake(look it up) Its for tourists as well, and now we only sell authentic cultural artifacts and attract tourists with cultural dances and outfits. Think about why they used to have to change and be different to attract tourists in the first place., My grandfather's name was James Sak Atsenharonkwas (piking embers off the fire) the son of John Macomber. They have both passed away. I was given my great grandmother's name who has also passed away, Kawennaroroks Mccomber(gathering words)

Chief Poking Fire was my grandmother's uncle John McComber. Believe me, he was Mohawk and certainly not a Ukrainian Soviet air force pilot hahaha! We had some British ancestry in our families DNA that were a result of a political marriage in the 1700's that accounts for his stunning blue eyes that my grandmother Pauline Loft also inherited. I'm sure his laughing up a storm up in his Happy Hunting Grounds at who every wrote the inaccurate genealogical research. We Mohawks do love a great laugh!

Not the answer you're looking for? Browse other questions tagged native-americans canada or ask your own question.

9
Who were the Deer Touchers?
10
Why is/was the world's expo 1967 so important to Montreal, Canada?
2
What was a "Teuctli" in Mesoamerican history
6
Who sold this book in London in the 1930s?
4
What was John Buchan's position on Jewish immigration?
4
Are there any histories of indigenous Americans who were taken to Europe?
4
When and why was the 55th parallel established as an administrative boundary in Quebec?