What are specific parts of this 19th century dress called? 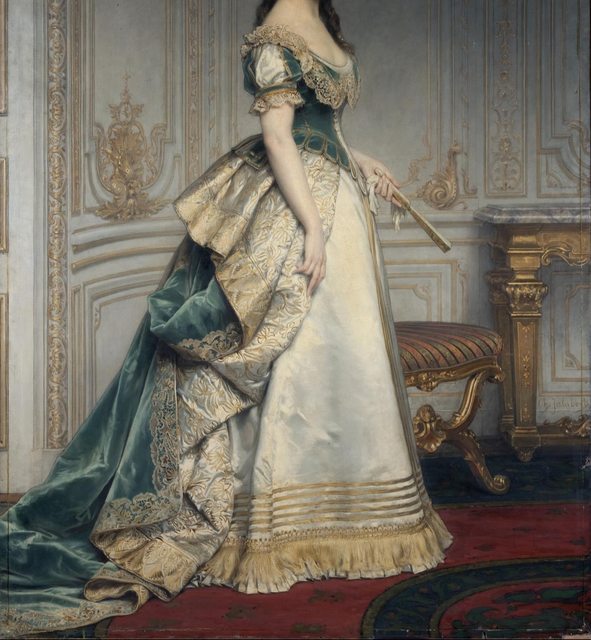 So this a the Portrait of Nadezhda Polovtseva in which she is wearing a white and green gown. I just need a really simple explaination of what the separate pieces of the dress are called, specifically the green top, white skirt and green bust, in fashion terms. I've read somewhere that it might be a taille, suit and garniture but I feel like that might be wrong lol. Also, is it all one garment, or are they all separate pieces put together?

Court wear is intrinsically weird. The dags on the bodice (waist) are characteristic of court dress, not normal clothes. "Garniture" is not a familiar term. Bodice would be a single piece. White skirt is second piece. Bustle & en train are a third piece. (Consulting with my professional historian girlfriend, who is also a Costume Society of America member).

Dressing up in a second bustle era may be helpful. It is about 10-15 years later than the painting, but the only things that have changed are the shape of the garments. The bodice/skirt/overskirt (bustle) remains in essence the same.

I looked up the definition of garniture in the context of fashion, and I'm almost positive that it is not being used to describe the structure of the dress.

update The gown may or may not be court wear, but it is quite formal as evidenced by the gloves and fan (indicating it's not for wear at home), the velvet (blue), satin (white, possibly taffeta but I read it as a heavier satin), and extensive gold trimming. The Russians were noted for exceptionally lavish clothing throughout the century, so perhaps this is "merely" formal.

However, from middle-class day dress to the highest couture and greatest formality, the basics of an era are the same - hence my reference to the video. You'd still be putting on a chemise and stockings, corset, bustle cage, petticoats, etc. It's just the exact cut and details that change. Think of it like how jeans and a shirt were very different looking in the 1980s than today, but in the fundamentals of how you wear them, and what is underneath, it's the same.

The structure and cut are extremely indicative of the early 1870s. Another feature of that decade - as with the decade prior and after - is front-fastening bodices. There is simply no need to bring in stomachers or other garments from centuries prior. Izabela Pitcher in her book gives a pattern in shape remarkably similar to this dress, but is actually taken from a 1873 gown in the Met collection. It has a center front button closure. Even Waugh, referenced by LangLangC, indicates in her patterns that front fastenings are typical. As do other references (two noted below, I doubt anyone really wants my entire library holding...). Likewise, there is no bertha. The lace around the top of the bodice is most likely trimming on the bodice. The white in the sleeve is the same satin as the skirt, indicating it is not a peek at an underlayer, but an integral part of the sleeve - much like the 16th century German Landsknechte was "faked" by stitching in fancy material to puff through the slashes.

So, then, to answer the actual question. In current American nomenclature, the outer garments would be a bodice (sleeves, front, etc. are all one piece), skirt, and trained (or en train) bustled overskirt. For all that they are very fancy, that's all they are - three pieces. The one bit I'm not entirely certain of is the white at the front neckline. That may be part of the bodice, or it may be a "modesty" infill as LangLangC suggested. Given the white down the center front, I'm inclined to think part of the bodice, but then this is a painting and subject to all the same artistic license as any other illustration. 1870s painting isn't like the Italian and Spanish Renaissance painters, who were often so detailed you can make out individual ravelled threads!

Beneath the dress would be, at a minimum, stockings, slippers, chemise, corset, overcorset, cage bustle, and petticoat. Not too dissimilar to those illustrated in the video.

Edwards, Lydia. How To Read A Dress: A Guide to Changing Fashion from the 16th to the 20th Century. Bloomsbury Academic, 2017

With some caveats: I'd argue that it's not any type of 'court dress' that's difficult to analyse. Highest fashion – whether 'court' or not – is in reality much more convoluted than idealised typical types. But this is a real-world example, unlike idealised 'type' examples in fashion books. As such, for example her arm dressings (the slit/paned sleeves) are out of time, compared to what was 'fashionable' retro by a hundred years or more.

Personal style and taste or just any designer's ideas can throw one off. I'd like to go shopping in town wearing Victorian dress. On certain dates at least. The Parisian behind for example is quite modest, not possible for me to tell how constructed exactly with certainty. Added to that is the problem that fashion was and is 'international', but local styles can differ quite a bit. History books on fashion have to reduce that variety down to types, often for a specific region. In reality 'English style' was worn in Paris, 'French style' in Moscow etc.

Whether it's just a bustle/crinoline and train are at least two separate pieces.

The bodice is undecidable for me whether it also includes stomacher. It most probably should, as separate piece, but the view is not ideal on that.

The terms presented in the question are a bit off, but in fact related to fashion:

This is not in the least also because there is almost no generalisable pattern to observe whether a term is borrowed from another language and satys, co-evolves or diverges in meaning afterwards. For example, like @TED commented:

Just a word of warning: The English words for various articles of clothing are notoriously dialect-specific.

Which unfortunately also means that some terms changed their meaning completely over time. Here, only the 19th century meanings are relevant.

Roughly from top to bottom we see quite a lot of technically separate pieces, making up the full dress in layers. Related fashion terms for describing this:

Everyone else has been saying that this is not a court dress. I disagree. I feel that to understand the dress you must understand the person wearing it. The portrait is of Nadezhda Polovtsova (patronymic Mikhailovna, surname based on the word June, Iyuneva Yianina) the bastard daughter of Mikhail Pavloviche, the brother of Emperor Nicholas I. She was left with one of the richest family’s in Russia, after being baptized as Christin Orthodox. The adoptive father was Baron Alexander Stieglitz and wife Caroline, a wealthy banker who had lost his only child. The son was a baby when he died and because of suspected health reasons this wealthy family was never able to have another child. They happily accepted this little girl that was left for them. They were Lutherans themselves but respected their daughters surname and religion and were happy to have a child. She had a large dowry and persued by many men, but a young man of Nobel descendants but with no aristocratic title was doomed to a life as a poor official, but if he were to marry the daughter of the rich banker he would have a way up in society. His name was Alexander Alexandrovich Polovtsov and he won the heart of Nadezhda. They married in 1861. Through these congestion he held many important positions in the government including senator, Secretary of State, and was a philanthropist and industrialist.

The family both before and after the marriage was highly respected in the emperor’s circle and would have been in attendance in court.

The painting is captioned under her married name meaning it most likely was painted after 1861. The painting has no known year associated with it but it follows the patters of the style of the artist Charles François Jalabert was active and the portrait matched the work he painted between 1840 and 1900. When looking at the date of origin, Nadezha lived from 1843-1908. There are two other portraits of her dated from 1869 and 1876 which she appears to be of similar age. This means that painting is most likely from the mid 1860s to the early 1870s.

Not the answer you're looking for? Browse other questions tagged 19th-century russia france clothing fashion or ask your own question.