What are the red and white sectors of The Tower of Babel (Rotterdam)?

If you look at the finished lower levels, they are homogenous colored, but two small sectors, separated by another two sectors. Those different colored sectors are colored red and white.

Looking at the detail, it seems those are the sectors they use to move raw material to the section in construction.

What does this mean? Which are the materials the author is depicting?

If we look at the detail from the above image, there are definitely different materials being moved in those sections: 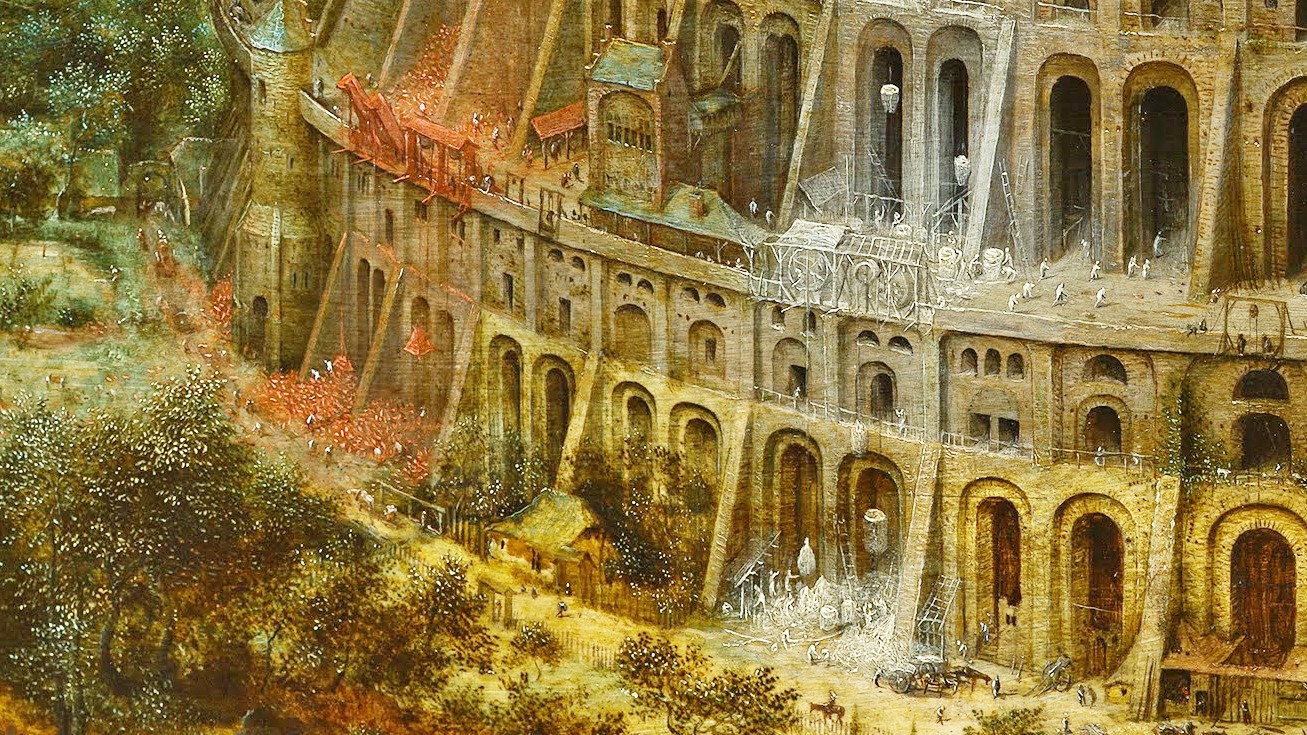 The red objects seem to be stacked on a flat pallet-like structure for lifting, while the material in the white area seems to be in large bags or buckets. I would say the red is representing the bricks, while the white would probably be a lime mortar mixture, or just lime itself, which has several uses in early constructions including concrete, lime paint or whitewash, lime plaster and stucco.

Concerning the color change from top to bottom addressed in comments, we can speculate on a couple of possibilities. My instinct is that this color change is showing the different stages of construction, with the lower levels already 'finished', while the upper 'red' levels are still 'under construction', showing the raw exposed brickwork.

The wiki page for the artist, Pieter Bruegel, mentions that he had been to Rome, and we can see the similarity architecturally between this painting and the arched construction of the Colosseum:

Bruegel's depiction of the architecture of the tower, with its numerous arches and other examples of Roman engineering, is deliberately reminiscent of the Roman Colosseum,7 which Christians of the time saw as a symbol of both hubris and persecution.

Since this painting is apparently being based on Roman construction techniques, we can speculate that the artist might have been familiar with some of the methods the Romans used to cover their rough concrete or stonework structural elements. These include Stucco, and a veneered surface known by different names depending on the style of material used: Opus reticulatum or Opus incertum

The wiki article on the Colosseum, Bruegels apparent 'reference', actually mentions the use of stucco as a finish:

All four axial entrances were richly decorated with painted stucco reliefs, of which fragments survive.

The other surfaces are discussed by Vitruvious, book 2, chapter 8:, who expresses a preference for reticulum:

Any of these finishes would change the appearance of the structure from its raw red brick color to a more completed look. (Another possibility is that the color change is just simply due the the change between the newer, 'wetter' bricks on the top and the older, more completely dried bricks on the lower, earlier levels.)

So there are a few possible explanations for the change in color between the lower, finished levels, and the upper reaches. But bottom line is this is an artists conception, not an actual Roman building, so this is still all just speculation and extrapolation of what Bruegel might have observed while in Rome.

An interesting side note, the actual Mesopotamian construction techniques for their Ziggurat structures, which may have inspired the biblical Tower of Babylon story, also used a two-material technique, with an inner and outer finished layer:

The sun-baked bricks made up the core of the ziggurat with facings of fired bricks on the outside. Each step was slightly smaller than the step below it. The facings were often glazed in different colors and may have had astrological significance. Kings sometimes had their names engraved on these glazed bricks. The number of floors ranged from two to seven.

I see no indication, however, that Bruegel would have had any knowledge of the actual Mesopotamian structures.

13
What are the dates of these panoramas of Paris?
2
Is my comparison on the significance of black and red pottery plausible?
2
In the painting “Ariadne”, by Arthur Streeton, why are the sails of the ship white?
11
What are the precursors of the Bayeux Tapestry?
25
Who are these red flag worshipers from these early maps?
10
Why are the buildings built in classical style in the first half of the 19th century in Russia so frequently yellow-and-white - coloured?