What was the de facto rule by which the imperial title was transmitted in various Chinese dynasties?

I seek to find information about which rules or trends - if any - applied in Chinese imperial succession during different dynasties.

I found this source, but I can’t get access and what I see in the preview seems largely mythological: 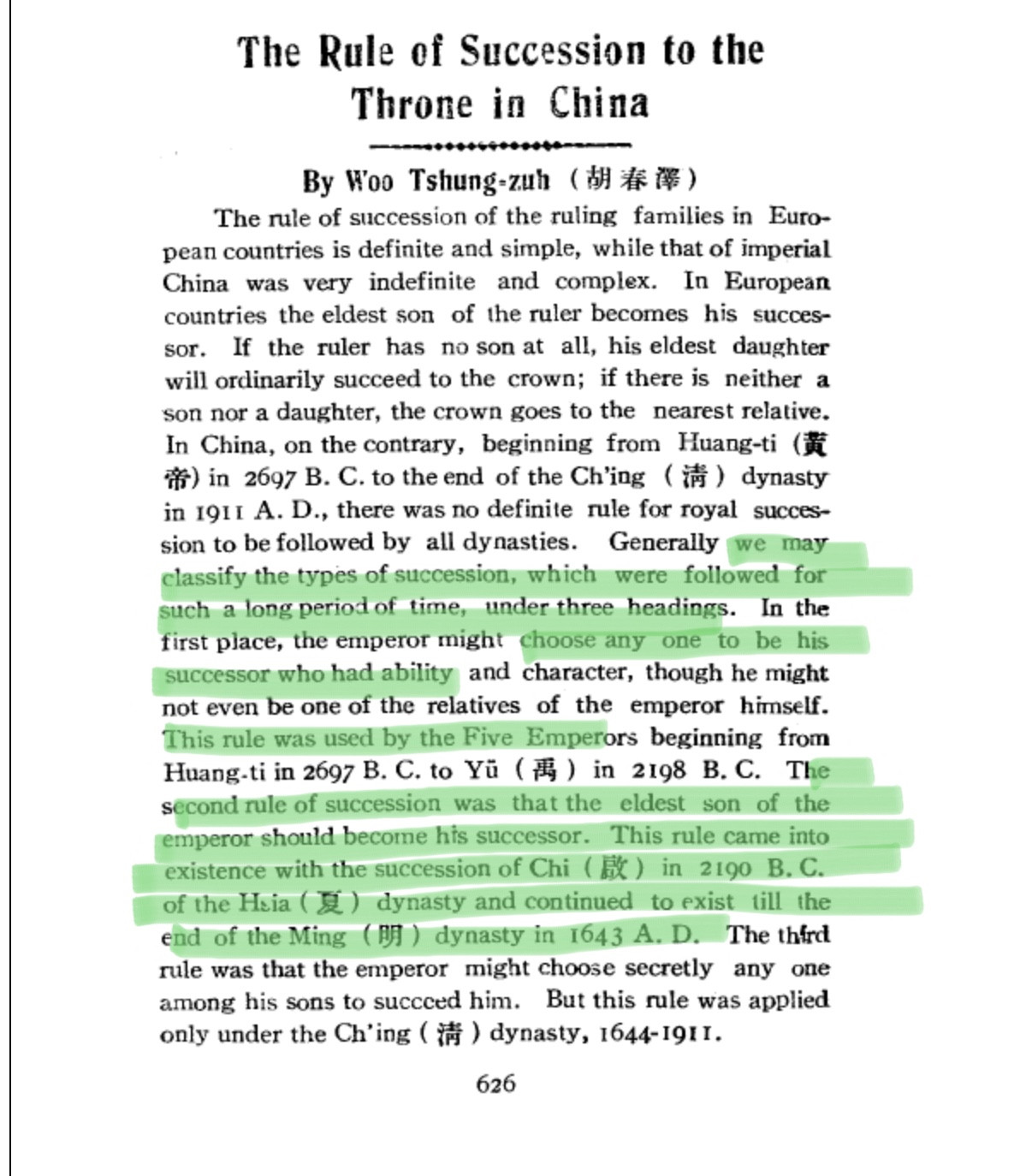 For the historical times, the information seems only broadly accurate. From what I know and wikipedia confirms, the founding Ming emperor, i.e. the Hongwu Emperor, designated the eldest son as heir. Said heir died and Hongwu contemplated breaking his own rules, which called for primogeniture, but in the end he designated his grandson, the Jianwen Emperor. But he was overthrown by his Uncle, the Yongle Emperor. So primogeniture can not have been absolutely followed.

What were the rules of succession during the different dynasties and in what fraction of successions did they really apply?

The times before Qin don’t really matter to me. Let’s also exclude the Yuan dynasty with their tanistry regulations and compare at least two other dynasties.

I remembered this book by Timothy Brook, which seems to contradict the above, when saying:

he [the Emperor] was constrained by centuries of ritual institutions that laid down the rules regarding who could be emperor (the eldest son of the previous emperor) and how he could conduct himself.

I am still re-reading it, but seem to remember the central claim, that China, which as an agrarian society had favoured primogeniture for stability, inherited from the mongols an element of tanistry. Tanistry being defined as follows:

Autocorrect made a grave mistake in the title and someone kindly came along and edited it, as was necessary. But in the process a vital point of the question was lost, namely that I am interested in the rules and what happened de facto and how much of a discrepancy there is.

For example, as I outlined above, the Ming founder decided to opt for a theoretical rule of primogeniture, thereby going against the general trend in China. But in the case of Yongle this rule was broken. How often was primogeniture actually implemented during the Ming?

Different example: the author above claims that the Qing followed a policy of secret designation by the reigning emperor. Did it translate into fact? If the succession was by primogeniture or military power in 90% of the cases, that might have been the de facto rule.

Firstly, your scope is too broad.

As I mentioned at your comment line, the succession of each dynasty is very complicated in China, as if there is no rule but there is a definite rule I describe I will describe under the bar.

For example, in Yuan dynasty's case, very broadly saying, the emperor of each dynasty was elected according to the decision by Kurultai. where

All Great Khans of the Mongol Empire, for example Genghis Khan and Ögedei Khan, were formally elected in a Kurultai; khans of subordinate Mongol states, such as the Golden Horde, were elected by a similar regional Kurultai.

But already around 40 years after the death of Genghis Khan, the general rule was broken, the Wiki about the Yuan dynasty says,

Genghis Khan died on 18 August 1227, by which time the Mongol Empire ruled from the Pacific Ocean to the Caspian Sea, an empire twice the size of the Roman Empire or the Muslim Caliphate at their height.[citation needed] Genghis named his third son, the charismatic Ögedei, as his heir.

So your "primogeniture," was already broken here. ( And further disputes continued afterwards. )

He was the ninth son of Emperor Huizong and a younger half-brother of Emperor Qinzong. Here already primogeniture rule was already broken.

General "Rule" ( but not rule but the mandate )

There is a "general rule" of the hereditary ( or the seize to power or the "requirements" every emperor needed, whatever ), according to the Wiki,

The title of emperor was hereditary, traditionally passed on from father to son in each dynasty. There are also instances where the throne is assumed by a younger brother, should the deceased Emperor have no male offspring. By convention in most dynasties, the eldest son born to the Empress (嫡長子/嫡长子) succeeded to the throne. In some cases when the empress did not bear any children, the emperor would have a child with another of his many wives (all children of the emperor were said also to be the children of the empress, regardless of birth mother). In some dynasties the succession of the empress' eldest son was disputed, and because many emperors had large numbers of progeny, there were wars of succession between rival sons. In an attempt to resolve after-death disputes, the emperor, while still living, often designated a Crown Prince (太子). Even such a clear designation, however, was often thwarted by jealousy and distrust, whether it was the crown prince plotting against the emperor, or brothers plotting against each other. Some emperors, like the Yongzheng Emperor, after abolishing the position of Crown Prince, placed the succession papers in a sealed box, only to be opened and announced after his death.

Unlike, for example, the Japanese monarchy, Chinese political theory allowed for a change in the ruling house. This was based on the concept of the "Mandate of Heaven". The theory behind this was that the Chinese emperor acted as the "Son of Heaven" and held a mandate to rule over everyone else in the world; but only as long as he served the people well. If the quality of rule became questionable because of repeated natural disasters such as flood or famine, or for other reasons, then rebellion was justified. This important concept legitimized the dynastic cycle or the change of dynasties.

This principle made it possible even for peasants to found new dynasties, as happened with the Han and Ming dynasties, and for the establishment of conquest dynasties such as the Mongol-led Yuan dynasty and Manchu-led Qing dynasty. It was moral integrity and benevolent leadership that determined the holder of the "Mandate of Heaven".

So it looks whoever it is, if the children or no children who should succeed is the under the "Mandate of Heaven" ( including self declaration ), he has the "chance" to be the emperor.

Responding to the update from the OP

Autocorrect made a grave mistake in the title and someone kindly came along and edited it, as was necessary. But in the process a vital point of the question was lost, namely that I am interested in the rules and what happened de facto and how much of a discrepancy there is

What do you mean by "de facto"? For instance, Lie Bei, who was the founder of Shu Hang, , was according to the above Wiki,

According to the 3rd-century historical text Records of the Three Kingdoms, Liu Bei was born in Zhuo County, Zhuo Commandery, which is in present-day Zhuozhou, Baoding, Hebei. He was a descendant of Liu Zhen, a son of Liu Sheng, who was the ninth son of Emperor Jing and the first King of Zhongshan in Han dynasty. However, Pei Songzhi's 5th-century commentary, based on the Dianlue (典略), said that Liu Bei was a descendant of the Marquis of Linyi (臨邑侯). As the title "Marquis of Linyi" was held by Liu Fu (劉復; grandson of Liu Yan) and later by Liu Fu's son Liu Taotu (劉騊駼), who were also descendants of Emperor Jing, it was possible that Liu Bei descended from this line rather than Liu Zhen's line. Liu Bei's grandfather Liu Xiong (劉雄) and father Liu Hong (劉弘) both served as clerks in the local commandery office.

Virtually nothing is revealed even by the official Three Kingdom. Another says, Lie Bei was nobody but an one of bunches of thugs, only hist family name is same with that of Hang's dynasty, which is Lie, and there are many people with their family name Lie in China today.

So the "de facto rule" is, like Zhang Jue,, who was nobody but a peasant but who led the broad rebellious campaign in the late Hang dynasty, whoever had the enough power to go viral against the then dynasty, had the right to become the "founder" or the "successor" of China.

According to the wik about Zhang,

Giving himself the title of "Great Teacher" (大賢良師), Zhang Jue led the Yellow Turban Rebellion with his younger brothers Zhang Bao (張寶) and Zhang Liang (張梁) in a campaign called the "Way of Heaven" or "Way of Peace". He and his brothers gave themselves titles: Zhang Bao was the "General of Land" (地公將軍), Zhang Liang was the "General of the People" (人公將軍); and Zhang Jue was the "General of Heaven" (天公將軍).6 The Yellow Turbans claimed to be Taoists, and rebelled against the Han dynasty in response to burdensome taxes, rampant corruption, and famine and flooding, which were seen as indications that the Han emperor had lost the mandate of heaven.

So whether it is because of the famine or the corruption, the emperor himself takes the risk of losing the "Mandate Of Heaven", which late becomes the potential cause of the rebellion and the exchange of the dynasty. Simple enough, eh?

Not the answer you're looking for? Browse other questions tagged china sources or ask your own question.

9
What was the social status of a man who failed the civil service exams in Imperial China ( 1200 - 1800 AD )?
6
What were conditions like for Chinese men subject to recruitment by the army during the Second Sino-Japanese War and Chinese Civil War?
2
How was Chinese Communism connected to the New Culture Movement?
6
Which tools were available in 1933 for the Chinese government to intervene in the money market?
5
Did the first emperor of China die of mercury poisoning?
5
What title did the merchants permitted to deal with Canton's 13 Factories carry?