Were the arches on medieval bridges large enough to permit river traffic? [closed]

Ask Question
Asked 11 months ago
Active 11 months ago
Viewed 2k times
6
Closed. This question is off-topic. It is not currently accepting answers.

I’ve been looking through the Civitates Orbis Terrarum to get a sense of the way Medieval cities and their surroundings were organized, but there are some questions I haven’t been able to answer about the logistics of river trade.

Were the arches on any bridges large enough to permit river traffic to pass under them? If not, would a river boat simply ferry up- and downriver between bridges? (i.e., would goods commonly have to be loaded and unloaded multiple times along the same river?)

Is this bridge, for example, large enough to accommodate a barge? (Lincoln High Bridge, built 1160 CE) Where I’m from, they need to raise the bridges to let barges pass.

EDIT 2: Thanks to everyone who’s responded so far. I know there were some bridges clearly able to accommodate river traffic, but a river is only as navigable as the smallest bridge along its course. If there is any single bridge your boat can’t fit under, it’s an impassible barricade, no matter how many other bridges will let you pass. If they ran into a bridge like that, did they haul the barge over land? Or, per my original question, did a barge only travel as far as bridges would allow it, requiring goods to be transferred between multiple boats over the course of their transport?

Why would you think that medieval people would build such impractical bridges?

After all, there are surviving medieval bridges, which are perfectly capable to allow river traffic.

Stone Bridge in Regensburg, Germany from the 12th century

Edit: the OP is interested in non-navigable bridges.
There is consensus in the comments, that in terms of economy a ferry offers the benefit of not hindering river traffic while allowing for road traffic across the river. A non-navigable bridge would only allow road traffic across the river, while all goods transported on the river would need to be loaded between barges up- and down-river.
As river traffic was more economical in the past, a ferry would be the preferred solution.

So, what about non-navigable brides?

Wikipedia offers several examples of bridges, which are quite narrow (in terms of span-width). 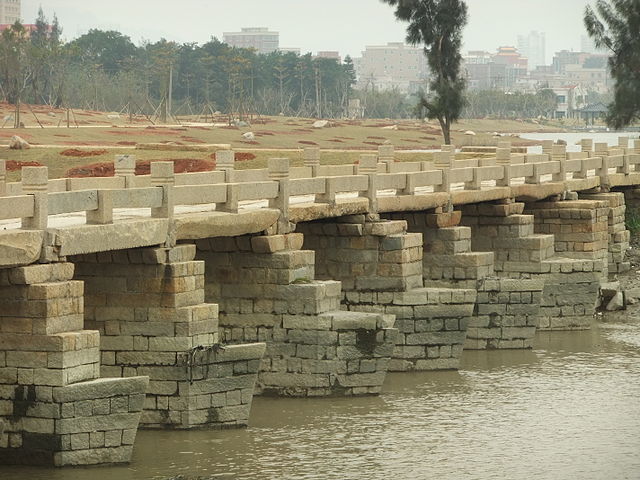 The Anping bridge in China from the mid 12th century 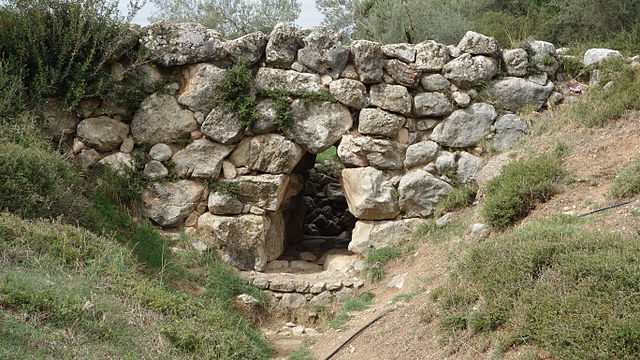 The Arkadiko bridge, although I am not sure whether it spans a navigable water way.

An example of a non-navigable bridge 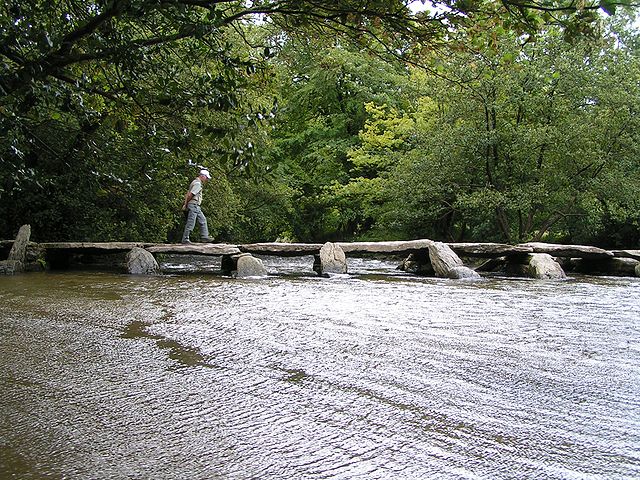 The Tarr Steps from somewhere between the Bronze Age and 1400 AD, yet I am not sure whether it spans a navigable water way.

Yet another topic addressing the question: un-loading and re-loading the cargo.

In medieval law there was a thing named Staple right, which forced a merchant to offer his goods in a place (city) that had the Staple right. So a trader would have to unload the cargo, and offer it on the local market for a prescribed period. Afterwards the cargo can be loaded again on a river barge.
In such a scenario, there would be an actual incentive to build a bridge with a quite narror span, as it would prevent anybody from simply passing the city.

The old London Bridge (1209-1831) not only had arches wide enough for river traffic, it had a lifting drawbridge in the middle to allow tall ships to pass through it. It’s true, however, that the current through the arches was very rapid because of the obstruction to the river from the bridge’s structure.

Not the answer you're looking for? Browse other questions tagged middle-ages bridge or ask your own question.