How long would it take to build 30 miles of Roman road?

Say there's a route of 30 miles length in need of a road. Assume ready availability of stone and lime and possibly other materials. Some gentle slopes, no particularly adverse terrain or flora/fauna.

How long would it take for a team of road builders to complete construction, approximating Roman empire standard, assuming Roman empire technology? And how big would that team typically be?

Tough to narrow this down, but at least a couple sources make what may be a useful comparison to more recent construction of Scottish military roads in the 1700s.

from The Secret History of the Roman Roads of Britain: And their Impact on Military History, By M.C. Bishop

Direct comparison is obviously difficult, not least because there would inevitably be special circumstances surrounding the construction of roads in highland terrain, but it can at least provide some hints at what would have been possible in the Roman period. The expected rate of construction was 1 1/2 yards (1.35m) per man per day (at 16ft - 4.8m- most roads were just over 5 yards wide), and in at least one case 2 yards per man per day was achieved.

A second source , The Planning of Roman Roads and Walls in Northern Britain By John Poulter, references the same Scottish constructions as a proxy, and gives some numbers on the crew sizes: 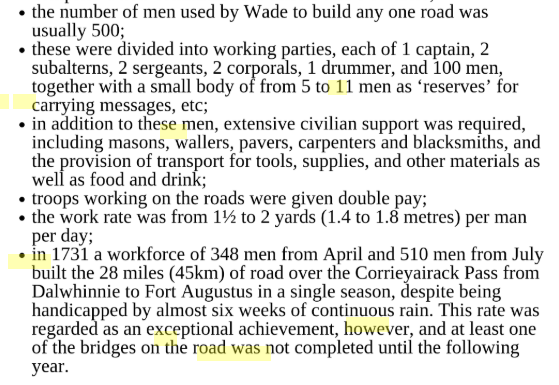 Note the last figure speaks of building a road 28 miles long in a single work season, which the book mentions was April to October. Reasonably close to your requested 30 mile road.

I don't know if this helps: but the Via Appia between Rome and Capua was built in 4 years (312 - 308 BC) The distance is disputed but was more than 100 miles. See EngineeringRome.org

Not the answer you're looking for? Browse other questions tagged roman-empire construction or ask your own question.

13
Short or long Roman numerals?
11
How did the Romans build straight roads that stretched very long distances?
9
What would slaves in the Roman Empire call their masters?
19
Why would Jesus' parents travel to their birthplace for a Roman census?
6
What would be the GDP of the Roman Empire?
10
Would every Roman army have dedicated engineers?
2
How many people were needed to build a country house?
0
Would a Roman emperor during Pax Romana be recognised by Roman Britons as a king of Roman Britain?