Where was Haile Selassie's palace in the Ogaden Desert?

According to Kapuściński's informant W.A.-N., in the former's book about Haile Selassie, The Emperor:

It is true that some excesses were committed. For instance, a great Palace was constructed in the heart of the Ogaden Desert and maintained for years, fully staffed with servants and its pantry kept full, and His Indefatigable Majesty spent only one day there. But what if His Distinguished Majesty's itinerary were such that at some point he had to spend a night in the heart of the Desert? Wouldn't the Palace then prove itself indispensable? Unfortunately, our unenlightened people will never understand the Higher Reason that governs the actions of monarchs.

The Ogaden seems an unlikely spot for decadence. I did a little searching without finding another reference to this palace. Where and when was it built, and is any photograph available?

It was probably the one in Gode. More properly called a villa than a palace. But the locals referred to it as "palace" as it was still the biggest building for hundreds of kilometers around. Although some even did called that building Selassie's "Winter palace".

On 13 July 1977 Carl Gustaf von Rosen died in this 'palace' when the WSLF under Abdullahi attacked the city:

In Gode, the capital of a district of about 70,000 people, there is still a villa of the emperor Haue Selassie, reverently called palace by the population, because the emperor's house is the only modern residential building within a radius of hundreds of kilometres. The fate of the Swedish warhorse Count von Rosen, who once made a name for himself with his Biafra flights, was also completed here.

Von Rosen and an Ethiopian delegation spent the evening of 13 July in the Kaiser Villa. It was the day on which the Liberation Front launched the general attack on Gode.

"One detachment," said WSLF commander Abdullahi, "also attacked the palace." Von Rosen stayed in a room on the ground floor and fired from the window. "He was very brave," Abdullahi said, "but of course he did not succeed in taking the life of a Somali. But we were unfortunately forced to kill him."

According to Shimelis, he was killed by an attack from Somali fighters who broke into the imperial palace in Gode, Ethiopia in 1977 along with an Ethiopian Somali official.

As we can see the expenses there were indeed substantial for an otherwise neglected backwater province, only slightly more expensive than the local school and half of what a hospital took: 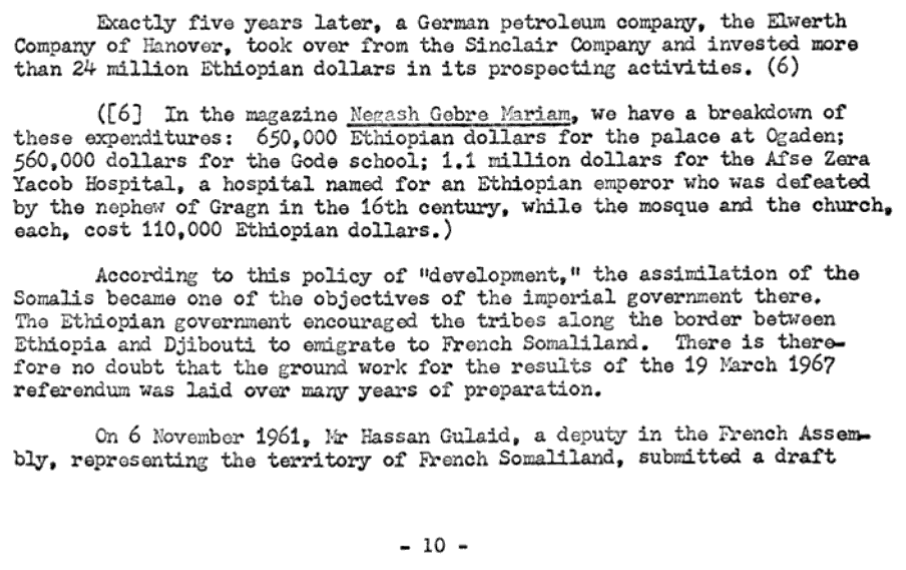 As such, the more typical dwellings in that region looked apparently more like this: 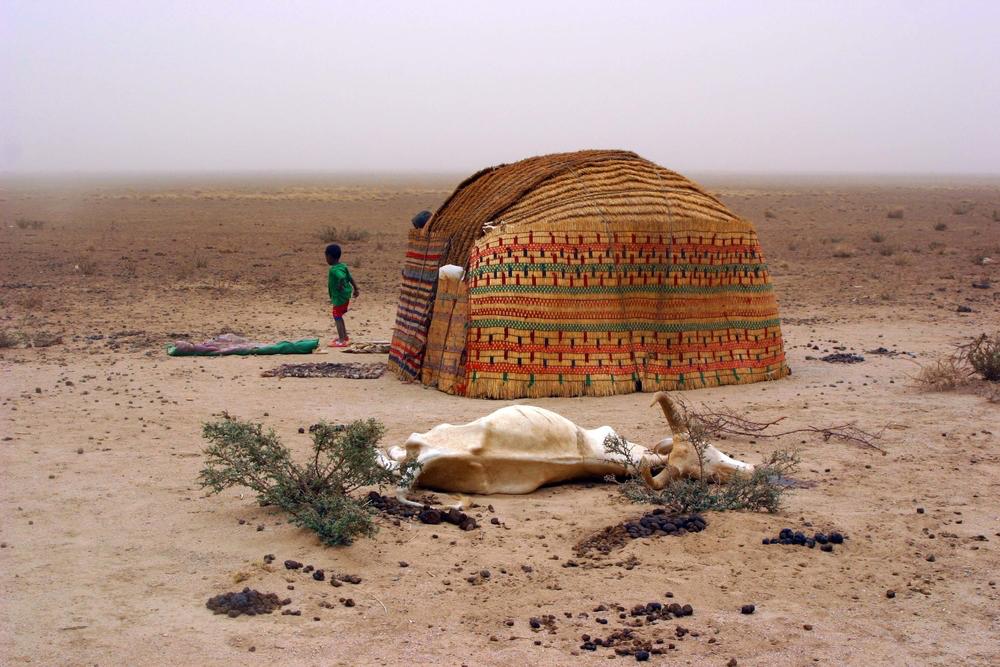 It seems doubtful that "in the desert" should mean "one single building and nothing but rocks and sand around". This Gode villa/palace would qualify for "in the desert" as Gode not only still small but it also remote and destitute:

Unfortunately, fertiliser is twice as expensive in Gode as in the capital, Addis Ababa. So is the fuel needed to pump water out of the river. The reason is that Gode is in the middle of nowhere and has no tarred roads. Its remoteness also depresses the price its people can get for their surplus crops in good years: they cannot afford to truck their produce to city markets.
–– "Will they ever have enough food?", Reuters/Economist, 2001.

Some tiny and quite peripheral information describing the palace might also be found in von Rosen's biography:

Not really in the town of Gode itself, but some distance away. Built by Swedish Skanska in 1966, having thick walls, a veranda, at the time of the attack occupied by the local administrator Bellete Ergetie.
–– Heli von Rosen: "Carl Gustaf von Rosen: An Airborne Knight-errant", Books on Demand, 2017 (p319–320)

It looks as if the settlement is quite a young one regarding 'proper city' features:

Gode was established in 1965 by Emperor Haile Selassie, who ordered construction of military base, well, mosque and church and laid a runway in this easternmost strip of Ethiopia.
–– Michal Przedlacki: "Story of Gode, artwork", 2010.

It stands to reason that Selassie was present when "Gode Airport" was inaugurated 10 June 1966 and that he stayed overnight.

A slightly more exact location is implied in a retelling of the attack on Gode:

The Somali troops fired relentlessly at the military headquarters and the air force on their way to the palace. They killed all on their way to the ultimate goal: to capture Gode, conquer the palace and kill Adam. (Adam is the nickname of the then local governor Bellete Ergetie, LLC)
–– Barbro Ergetie: "Imperial Ethiopian Air Force – IEAF – In Memoriam", Tenaestelin, Medlemsblad För Svensk-Etiopiska Föreningen, Årgång 47 Nr 2 Oktober 2006, p 28. (PDF)

Stockholm (TT) Swedish flight captain Carl Gustaf von Rosen has died in Ethiopia. According to a message to the Swedish Foreign Ministry, von Rosen was killed during a guerrilla attack near the city of Gode in southeastern Ethiopia on Wednesday. Von Rosen had flown to Gode with a Swedish-registered Cessna belonging to the Swedish Journal's Ulandshjelp along with some officials from an Ethiopian relief organisation. They would meet with local administrators on a nomad resettlement project on the Wabe Shebelle River northwest of Gode.

Not the answer you're looking for? Browse other questions tagged monarchy architecture building ethiopia desert or ask your own question.

11
Was the Church of St Simeon the Elder at Aleppo built while Simeon was still alive or decades after his death?
9
Was there a case where a king died while the heir to the throne was unborn?
3
Is there, or was there ever a venue known as “Cobo Arena” in Detroit?
13
When and where was the first time moveable bridge?
1
Where in San Francisco did the Land Commission meet?
0
What is this building called? (It was built in 2002)
3
When did the allied “Desert Air Force” in North Africa smash Axis armour?