Did medieval stores have names?

Re-posting this question of mine from the Worldbuilding Stack Exchange:

I know it's common for shops and stores to be named in D&D and other fantasy settings, but how common was that practice in the medieval era (say, from 1000 AD onward)? It seems to me that inns and the like were named more often than, say, the workshops of smiths, traders, or other craftsmen and merchants.

I'm trying to be as "realistic" as possible with the campaign world I'm establishing, so if there's historical precedent, I'll feel better about it.

Edit: It's also been brought to my attention to clarify whether or not I mean this in a general or specific sense. The answer is the former. If the convention wasn't really present in Asian or Middle Easter countries, for example, but was in European ones, that information still helps immensely. I'm just hoping to find out how popular the practice was in the medieval era.

For the most part, we have little evidence for the naming of shops, especially before the Late Middle Ages in Europe. Visual evidence suggests that almost all shops did not publicly display a name but some did display an object representing their trade. A surviving example of a shop name from England is La Corner Schoppe, while in Italy at least a merchant might use his family name. In China, medicine shop names were common in the 10th and 11th centuries at least, examples including Infant Malnutrition Medicine Shop and Ugly Granny Medicine Shop.

The history of shop signs reaches back at least to Roman times. In northern Europe, however, the earliest traces seem to date from the thirteenth century, although it is possible that they were in use before then. By the sixteenth century both signs and names seem to have been numerous all over Europe, and the evidence suggests that their numbers continued to increase in most cities until the eighteenth century.

In a footnote, Garrioch cites evidence from Adolphe Berty (1855). He

found two in Paris from 1206 and 1212. He argued that they were probably more numerous than the records suggest, but he adds that there was no doubt less need for them in the less crowded outer areas than in the city centre

the earliest sign found...dates from the 1340s and the house-lists for this part of Paris in 1280 do not contain any.

For London, the oldest shop sign with a name found is from 1278, according to the BBC article La Corner Schoppe: the funny origins of shop names:

The earliest recorded shop name is La Corner Schoppe [sic]. The name was found in a document written in 1278 in Westminster, London. However there were numerous Corner Shops throughout the 1200s onwards, but most would have taken the name of the building.

The orginal source for 'La Corner Schoppe' (actually 'la Cornereschoppe') is the Calendar of Wills Proved and Enrolled in the Court of Husting, London: Part 1, 1258-1358 (ANNO 7 EDWARD I)

Readings in Medieval History, Volume II has primary source material on a Florentine merchant, Stagio, who used his own name for his shop, but it's not clear if this was displayed or not.

The history of signboards: from the earliest times to the present day is a dated source (1867) quite detailed:

...signs were of but little use. A few objects, typical of the trade carried on, would suffice; a knife for the cutler, a stocking for the hosier, a hand for the glover, a pair of scissors for the tailor, a bunch of grapes for the vintner, fully answered public requirements. But as luxury increased, and the number of houses or shops dealing in the same article multiplied, something more was wanted. Particular trades continued to be confined to particular streets ; the desideratum then was, to give to each shop a name or token by which it might be mentioned in conversation, so that it could be recommended, and customers sent to it. Reading was still a scarce acquirement; consequently, to write up the owner's name would have been of little use.

Looking at images of medieval art seems to confirm the above. Most shops have no sign of any kind, but a few have objects - see, for example, and the images below. 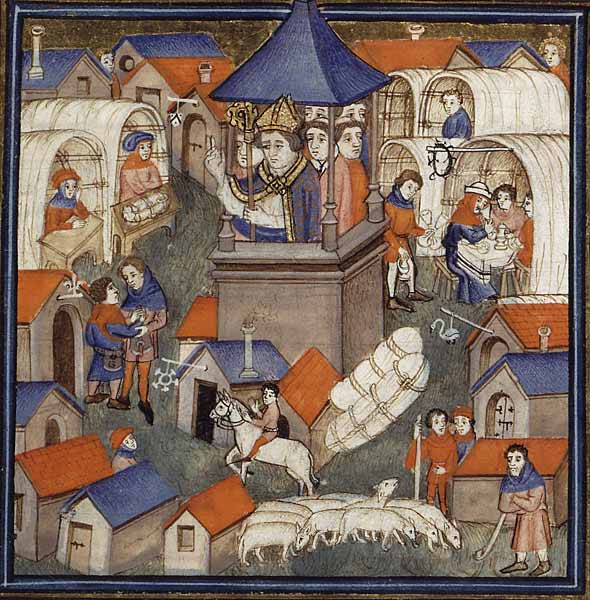 The webpage Merchants’ Stalls & Shops has links to more images from various European cities. The only sign with writing is this "Hand-colored 19th-century woodcut reproduction of a medieval illustration", but even here none of the other establishments visible seem to have any signage (there's a better image here). There are also a number of illustrations of shops (salt, cheese, butcher's shops) in the Tacuinum Sanitatis but none appear to have names displayed. 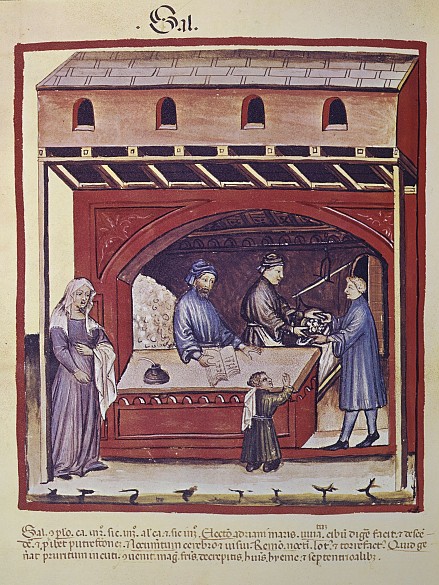 Without saying so explicitly, it seems that medicine shops in 10th & 11th century China had shop signs. A Social History of Medieval China gives numerous examples of shops with names (including the imaginatively named Ugly Granny Medicine Shop), but doesn't actually directly say they had names on signs.

The Academy of Saint Gabriel is a group of volunteers who have compiled lists of historical names from the Medieval and Renaissance periods. Their compilations of Sign Names for Places include:

Most villages didn't have shops.

Think of the population size. You grew up with these same people all your life. No one went anywhere. Peddlars traveled. Tinkers repaired pots. Gypsys had skills needed too. You either made it yourself or traded for it.

I live in extreme southwest Kansas. Raised on my grandmothers homestead. 11 children in my class until high school. The citizens here do their own work: welding, tree felling, horse breaking, milking, and no we're not Amish or something other. We didn't have street signs until UPS required them. Then we did the county. When we need someone with special skill or equipment, we ask around.

My address is driving instructions. 9 miles south, 15 miles west of the NW corner of a town because I live on a dirt track. The whole county except state highways are dirt roads- county seat excepting. Lots of rural anywhere in the world is the same now.

Imagine a thousand years ago, check the population of the region you are interested in, and extrapolate up as the population rises. By the way, even in metro USA, people tend to stay within their small corners of it. I have no idea why. I lived in Denver for a while and was all over the place.

One point is that trade went through a massive expansion in the 12th/13th centuries. Here is a review of a beautiful and fascinating book on the subject: Spufford: Power and Profit. Other books also by Peter Spufford cover similar territory and are similarly worthwhile. So in major cities, at least, you might need to be more specific about which period you are interested in.

Stretching the question, it might help to look at English cities in the early-modern period, just because then we have some humble, everyday publications that advertise their printing shop:

Those are two early examples out of many in the Bodleian library's collection of broadside publications. You can find more, though later, examples (search for "sign" in the "Imprint" section of Advanced Search). The printers' shops are referenced by address and a nearby sign, presumably of a pub in most cases. We can stop searching for "sign", but stay in the 16th century, to find some addresses without signs (all from the Bodleian broadside website mentioned):

If we accept that these are (partially) relevant to your question, it seems that the name of the printer is how the shop was identified. (At times, there would have been a legal requirement to name the printer, as each publication required a licence, but the first example makes it clear that this is also an advert for trade.)

Short and very general answer -- if the town was big enough to have shops, a common practice was to have pictorial signs. These might be standardized tools of the trade as another poster mentioned, or might just be a memorable and easy to describe image. The location of an inn might then be given as "under the sign of the dancing pig." These references still persist in traditional music and stories, for example "I live at the sign of the ups and downs" in the song by the same name.

Not the answer you're looking for? Browse other questions tagged middle-ages shops or ask your own question.

33
What is the date and original source of this medieval picture?

24
Is it true that medieval villages didn't have names?
7
What name is taken if a man marries into a noble house?
19
What evidence is there for chain stores or restaurant chains in Ancient Rome?
7
Did the medieval Europe have an active “lowbrow” culture?
5
Did ancient/medieval armies have music/chants to march to?
47
Did cows in Medieval times have calves in spring or all year round?
9
When did passenger ships first have an on board duty-free shop?
5
Did medieval Mongol horse archers have deformed arms like English bowmen?