What is the archaeological evidence for the Aztecs' use of entheogens?

A recent Skeptics question, Was honey used preserve psychoactive mushrooms in the ancient past?, caught my attention and I came upon the Wikipedia article on the Aztec use of entheogens. The article is poorly sourced, and mostly points to the Florentine Codex, but it also hints towards other sources:

The ancient Aztecs employed a variety of entheogenic plants and animals within their society. The various species have been identified through their depiction on murals, vases, and other objects.

The Wikipedia article on Entheogenic drugs and the archaeological record isn't particularly helpful either, although it does point to Xochipilli and the interactive presentation of the figure in J. Paul Getty museum's website.

I can't seem to be able to find other sources that directly discuss archaeological evidence or contemporary literary evidence other than the Florentine Codex, perhaps because most sources are in Spanish and/or not available online.

Though interpretation is always imperfect, many would use folios from the Florentine Codex as direct evidence for mushroom use among Aztecs, and probably Mesoamericans broadly. Here is the prime piece of evidence: 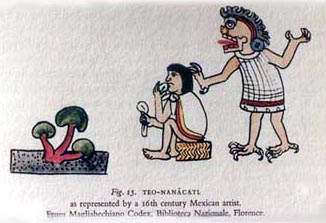 There is a very deep relationship between this practice, Xipe Totec, the ixiptla of state ritual, and the governing of societal renewal, which I have written about in some detail. Though I won't provide references here, you can think of all this 'renewal' as part-and-parcel in the practice of Medicine - which for the Aztecs could often include (what we call) the 'shamanic' medicines. They were normal, if not strong, medicines for those peoples... a 'prescription drug', if you will.

The imagery is prevalent in many arbitrary sources also because modern descendent of Mesoamerican people assert the authenticity of these practices.

Not the answer you're looking for? Browse other questions tagged medicine mesoamerica aztec or ask your own question.

22
Is there any documentation that indicates the Aztecs were as violent as they are made out?
3
Evidence of Aztecs using Quetzal feathers as commodity money?
9
Did native Mexicans prefer Spanish rulers to the Aztecs?
1
What does the Aztec word "calpuleque" mean?
2
What were the major ethnic / cultural / politcal divisions of pre-conquest Mesoamerica?
5
What type of name did the common Mayans use?
7
Was there contact between the Inca, Maya and Aztecs?
6
Did healers in medieval Europe use moldy bread in poultices for wounds?
3
What events led to the Aztecs and Mayans adopting cocoa beans as a currency?
2
Has there been significant progress in our knowledge of the Aztecs and/or Maya since the '60s?