Did the Nazis regard chemical warfare as inhumane and "Jewish"?

I sometimes encounter accounts that the main reason why chemical weapons were not used in WWII was because initially they were invented by a Jew Fritz Haber, and as such Hitler expressed opinion that use of chemical weapons was inhumane and "Jewish" method of warfare.

There were even some hints that the Nazis made certain propaganda canpaigns against use of chemical weapons which involved WWI war veterans who suffered from gas attacks.

I wonder whether it is true that the Nazis regarded chemical weapons inhumane or was it only a propaganda disguise?

Hitler opinions on mustard gas seem to be quite the opposite from what you describe, given this quote from Mein Kampf 1:

At the beginning of the War, or even during the War, if twelve or fifteen thousand of these Jews who were corrupting the nation had been forced to submit to poison-gas, just as hundreds of thousands of our best German workers from every social stratum and from every trade and calling had to face it in the field, then the millions of sacrifices made at the front would not have been in vain. On the contrary: If twelve thousand of these malefactors had been eliminated in proper time probably the lives of a million decent men, who would be of value to Germany in the future, might have been saved.

Not only does he not consider chemical weapons inhumane, but clearly opines that mustard gas should have been used against Jews, during the first World War. Another quote that shows he considered chemical warfare effective is:

These tactics are based on an accurate estimation of human frailties and must lead to success, with almost mathematical certainty, unless the other side also learns how to fight poison gas with poison gas. The weaker natures must be told that here it is a case of to be or not to be.

I also came to understand that physical intimidation has its significance for the mass as well as for the individual. Here again the Socialists had calculated accurately on the psychological effect.

Later, he laments that the Germans were not prepared against chemical warfare:

Nobody seemed to think it possible that one day a war might come which would put the mettle of this kind of patriotism to the test, in artillery bombardment and waves of attacks with poison gas.

All that, even though he himself was a victim of mustard gas:

During the night of October 13th-14th, the British opened an attack with gas on the front south of Ypres. They used the yellow gas whose effect was unknown to us, at least from personal experience. I was destined to experience it that very night. On a hill south of Werwick, in the evening of October 13th, we were subjected for several hours to a heavy bombardment with gas bombs, which continued throughout the night with more or less intensity. About midnight a number of us were put out of action, some for ever. Towards morning I also began to feel pain. It increased with every quarter of an hour; and about seven o'clock my eyes were scorching as I staggered back and delivered the last dispatch I was destined to carry in this war. A few hours later my eyes were like glowing coals and all was darkness around me.

While Mein Kampf isn't really what I'd consider a historical source, Hitler's hatred of the Jews is evident in almost every page and I think the above quotes prove that at least he didn't consider chemical weapons a "Jewish" method of warfare.

While the Geneva Protocol prohibited first use, it didn't prohibited research, manufacturing and storage of chemical weapons and all combatants had access to various chemical agents at the time. Research on chemical warfare was active during Hitler's reign, Tabun was discovered in 1936 and production of the substance started in 1942, Sarin was discovered in 1938 and at least 500 kg of it were produced by the Waffenamt, and research continued as late as 1944, when Soman was discovered.

British Intelligence has recently (June 2011) released a series of reports that suggest Nazi Germany was planning to use chemical warfare in their planned invasion of the UK. The files are available online, here's a screenshot for posterity: 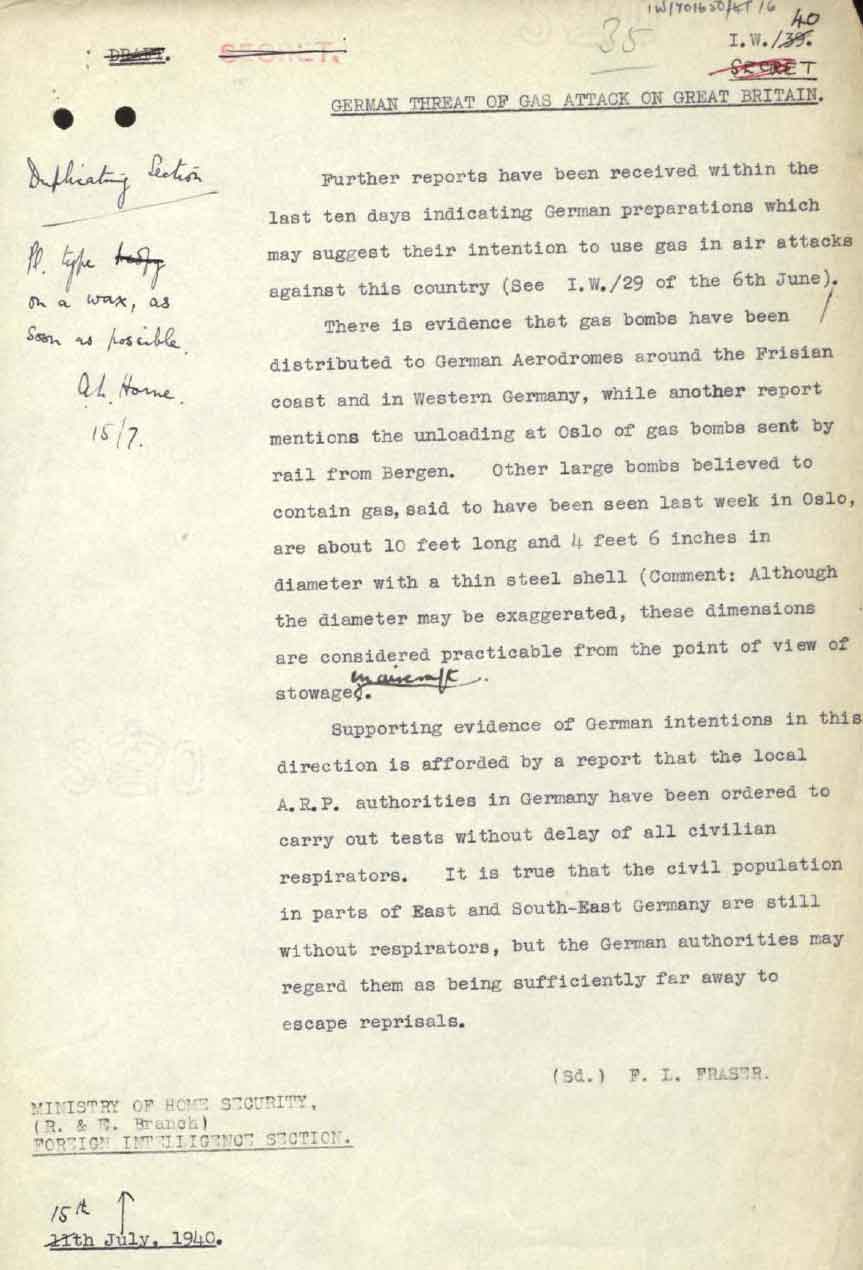 Obviously all combatants continued research and production of chemical weapons after the Geneva Protocol, and fear of retaliation was probably the primary reason their use was very limited, at least in Europe. In contrast, Japan made extensive use of chemicals.

1 The quotes are from Project Gutenberg Australia's version.
2 Full text of the Geneva Protocol.

Well, first off, it isn't totally true that they weren't used. There were a couple of incidents during the invasion of Poland.

One would imagine that the main reason they weren't used though was that they had been outlawed for (first) use in warfare by the Geneva Protocols of 1929, which Germany was a signatory to.

However, in order to back this up, it appears every major combatant ammased a huge stockpile of chemical weapons, so as to create an early variant of the MAD principle.

Between 1939 and 1945, the British produced 40,719 tons of mustard gas, the Soviets at least 77,400 tons, and the Americans over 87,000 tons. Even the Germans, the sole possessors of nerve agents, intended to use it in their chemical arsenal - during the Third Reich's span of existence they produced over 27,597 tons of sulfur mustard

Most likely it was a combination of the moral force of the Geneva Protocol, backed up by the MAD situation where everyone had a huge stockpile just waiting to go, that prevented any serious use of chemical warfare in WWII.

IMHO any public argument Hitler presented against chemical weaponry use was most likely designed for propaganda purposes, rather than representing a heartfelt belief.

Not the answer you're looking for? Browse other questions tagged 20th-century world-war-two nazi-germany warfare nazism or ask your own question.

0
Why didn't Germans use chemical warfare during WW2?

12
How did the Nazis view Dickens' Oliver Twist?
48
How did the Nazis plan to defeat America during World War II?
4
Did Nazi Germany use chemical weapons on the battlefield?
5
What was the role of the Catholic church with regard to the Holocaust?
11
Why did Joseph Goebbels allow an all-Jewish Orchestra to exist and perform in Berlin from 1938 to 1941?
3
Why did the Nazis collaborate with the Ustaše?