What would a small-scale merchant in Renaissance Italy consider a necessity at home?

Presume we have a small-scale merchant in Renaissance Italy. By "small scale" I mean someone who has a shop and a house but isn't big enough to be a "rich merchant". I believe that something like this existed in Elizabethan England, where a merchant might have his family dwelling above and shop below in a small, two-story house. I'm presuming that something equivalent existed in Renaissance Italy, but I could be wrong, so I'm happy to know that as well.

I'd like to know which household items such a family would see as non-negotiable. That is, every merchant might have different things just due to what they sell and/or make, but perhaps every single such family would have a collection of pots for their own personal use. I'm using the "small scale merchant" as an economic class, not necessarily because I'm interested in merchants themselves. I'm just trying to distinguish them from farmers, and am expecting them to be in a city of the time.

First off, "small scale merchant" basically were the (land owning) farmers around then. They'd sell their excess production to merchant intermediaries, either on their farms or villages, or in trade fairs or more permanent trading centers.

The layer above that involved merchants moving goods around within their regional trade network (e.g. from the UK midlands to London and then to Calais and onto Bruges or Antwerp or Champagne). Presumably you meant those merchants.

What you seem to be referring to as rich merchants were those who moved goods from one region to another. Their more regional peers could make a good living too, as evidenced by e.g. the Cely archive from a century before Queen Elizabeth I.

Anyway, with that aside in mind, p.25 of The Renaissance by Tim McNeese will, I think, answer your question: 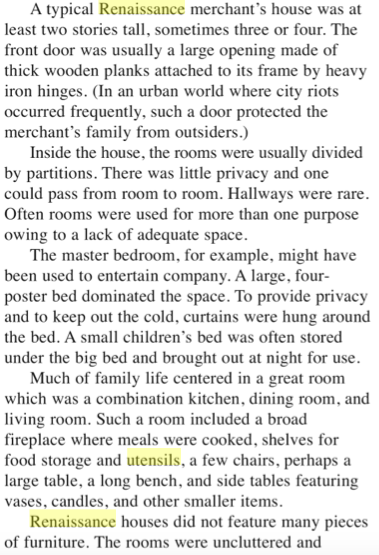 If you'd like a more in-depth feel of what commerce was like in the early Renaissance, the last two episodes of Tides of History happen to be on the topic:

The main difference with Elizabethan England was that there was more long distance transit by then -- and piracy, since the UK was basically into that in those days.

Not the answer you're looking for? Browse other questions tagged everyday-life italy renaissance or ask your own question.

9
What sorts of games of chance/skill and other events would a Middle-ages/renaissance festival have?