Did some Nazi death camp guards use Lee Enfield rifles?

I was watching the Netflix series The Devil Next Door and there was was video footage of a Nazi death camp. What was strange was that one of the guards appeared to be wielding a Lee Enfield No4 rifle with it's spike style bayonet.

From Episode 3 at about the 11 minutes 17 seconds mark: 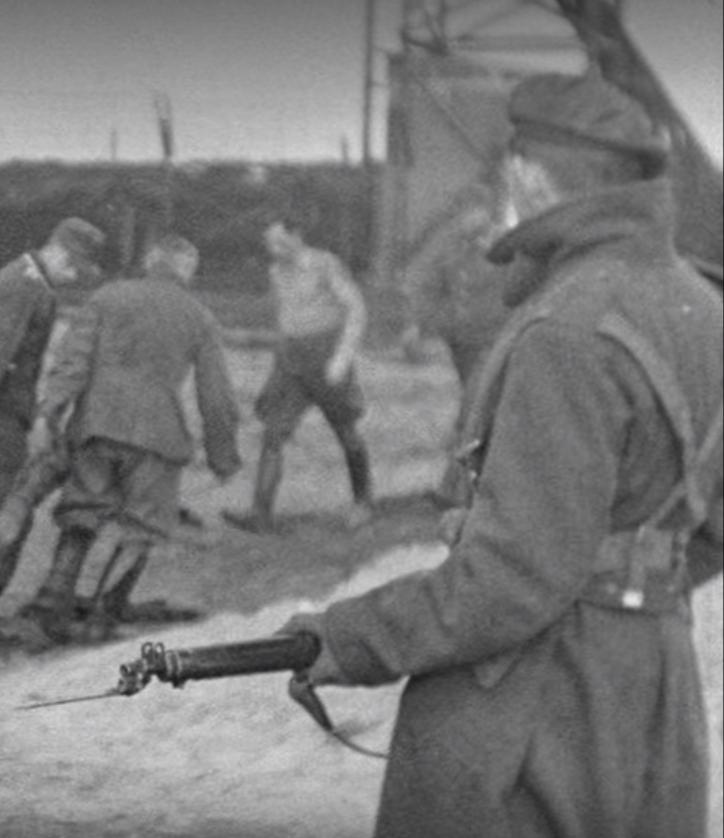 Is there some German rifle that I could be mixing it up with? Any idea how and why they would be wielding a British rifle?

With the picture material available I would like to challenge the frame of your question.

The picture seems to show multiple German soldiers in uniform (although only parts probably because parts were taken off for intensive labor) carrying what looks like it might be a dead body while an armed and properly, but differently uniformed soldier is standing in the front.

What this most likely shows is a scene after the liberation of the camp where German prisoners of war were used to clean up the camps, removing the dead victims and burying them. An allied soldier is standing guard over them. From their uniform and weapon I would assume the guard is British. For example compare the obvious German cap in the left with the very British looking cap of the guard.

That explains why it's a British rifle in the foreground.

Apart from the Germans using quite a few captured weapons and other pieces of equipment, you've also been watching a Netflix work of fiction.

Are you sure the footage is historical that you saw, and not staged as part of filming that series? A LOT of WW2 reenactment uses historically incorrect items, most people never notice. And that includes a lot more than rifles. Aircraft, vehicles, ships, are all substituted (sometimes with fiberglass covers to make them look more authentic) for things they aren't.

And a lot more Lee Enfields and Garands survive than do Mausers.

Germany captured a significant number of enemy weapons (and in some cases fabrication lines) and issued them to second-line troops. As John pointed out in the link in his comment, the Lee-Enfield became the Gewehr 283(e).

Not the answer you're looking for? Browse other questions tagged world-war-two weapons holocaust or ask your own question.