Which 'evidence' is there for a claim that 'Chinese discovered America in 636'?

The Brazilian Institute of Geography and Statistics is a branch of the Ministry of Planning, Budget, and Management. On its own website it has a history timeline with a few curious dates:

There is historical evidence of the discovery of America before Columbus by the inhabitants of the Pacific Islands, by Hindus, as well as by the Japanese and Koreans.

986 – The navigator Bjarni Herjolsson traveling from Iceland to Greenland was diverted from his route by a storm that led him south, taking him to new and unknown places. In 1001, back in Greenland, he told Leif Ericson, who years later followed with an expedition arriving in Helluland (land of rocks), Markland (land of wood) and Vinland (land of vines) in North America.

1117 – The Icelandic bishop Eirik made the same route and arrived at Vinland. In 1965, the Yale Library announced to the world the discovery of an ancient map where two islands appeared, one with the name Vinland and the other with the name Brazil. (The fact was discovered in 1960 by the Norwegian Helge Ingstad who found ruins of the old wikers in New Fonndland). This map is a precise document that records the circumnavigation trip made by Father John de Plano Carpini between 1245 and 1247.

1311 – The African king Abudakari II led a fleet of several boats from the African west coast towards the Atlantic Ocean, years later he returned only one boat reporting the discovery of America.

1339 – The name Brazil already appears in planisférios (cartographers Mediceu, Solleri, Pinelli and Branco). The Brazilian historian Sérgio Buarque de Holanda cites that the origin of the name Brazil is due to a Celtic legend that speaks of a "land of delights".

1474 – The most famous cartographer of the time, Paolo Toscanelli, wrote to a Portuguese friend in 1474, talking about the "Island of Antília".

1479 – Treaty of Alcáçovas - Portugal gives up the Canary Islands but now has rights over any discovery to the south of this archipelago.

1493 – The Order of Christ already knew the Isola de Braçill according to the map of 1482, made by the cartographer Gracioso Benincasa, in Ancona, Italy, the map indicates: the Portuguese coast, the African coast, the Brazilian coast and the Antílias. They maintained a policy of secrecy that condemned to death those who commented on the matter.

This is an extraordinary claim on an official government website.

There are of course numerous pre-Columbian contact hypothesis. Some with a bit more, some with a large degree of less confidence for what they present.

In all probability this is far from most official narratives. And not well supported. Not even in conspiracy-theory-friendly corners of the net.

Usually such claims give dates to a few decades before Columbus and the more outlandish ones go back 40000 years.

But this specific theory, for which the Brazilian institute claims there would be "evidence", seems also absent entirely from what 'theories' I could locate elsewhere.

The page seems to give credit to authors "Omar Fedato Aleksiejuk; Zido Raddatz", but all searches so far for these claims return empty and for authors back to the same.

Which theories posit that "there were Chinese discoverers of the Americas in 636"? Or which "evidence" might this institute's chronology might allude to?

Ironically enough, this is likely a case of Chinese whispers.

There is a relatively established crackpot "theory" that the Chinese discovered America in the 5th century or so, and called the new land "Fusang." This claim has been around for a while, and also features in the Wikipedia article linked in the question:

A group of Chinese Buddhist missionaries led by Hui Shen before 500 CE claimed to have visited a location called Fusang. Although Chinese mapmakers placed this territory on the Asian coast, others have suggested as early as the 1800s that Fusang might have been in North America.

As Wikipedia alluded to, Fusang is traditionally identified to be Japan by the Chinese.

The basis for the whole claim can be traced the Book of Liang, an official history of the Southern Dynasties compiled by the Tang Empire. As is traditional, it had a geographical section, and one of the passages on foreign countries state that:

Of Fusang, in 499, a monk of that country called Hui Sheng to the province of Jing, and says "Fusang is 20,000 li east of (Dahan), and east of China . . . Historically the country was not Buddhist, but in 458, five monks from the country of (Kapisa) visited Fusang and preached Buddhist teachings, and converted their customs.

Note: (Dahan) and (Kapisa) denotes names of countries named in this and similar historical Chinese sources. Little is known about them but they're typically placed in the Western Regions

As you can see, the Wikipedia version of the claim has already significantly diverged from the alleged source material: Hui Shen is not Chinese; he did not go to Fusang but rather came from there; and the group of monks who did came from a third country altogether.

Such errors seemed to have emerged as partial, broken, or misunderstood translations of the original text were circulated in crackpot circles. A 1892 version of the claim, for instance, got the dates and movement right, but also mistook the monks to be Chinese:

[C]ertain ancient records of the Chinese, which briefly record the visit of Chinese Buddhist monks to the land of Fusang in the year 458 of our era, and the return of a single Buddhist monk from this land in 499.

That is to say, people make a lot of mistakes on this story, so it shouldn't be surprising if they get the year mixed up too. Because you see, the Book of Liang was completed in AD 636.

There are two potential points of evidence that I am aware of.

1) A Mr. Moriarity and Mr. Pearson first published a paper detailing the findings of circular stone anchors similar to a type of anchor found in china that were found off the coast of California,

2) a map was published by Gavin Menzies that seemed to be a Chinese map from the 1400's showing both the old and new worlds.

However, (and to my surprise) the first claim about stone anchors is actually a disputed claim (see here). Dr. Frank J. Frost a professor at the University of California has done a study in which he concludes that the stone anchros are made from stone common to California. He claims the anchors actually from Chinese settlers to California who became fishermen only 100 or so years ago.

The map has been confirmed to be a forgery.
More info on the Map

There is a book called They All Discovered America, by Charles Michael Boland, 1961, which listed and discussed all the claims of pre Columbian discoveries of America that the author could find.

Each chapter should have a discussion of the evidence for the claim in that chapter. So that book could be a fairly good guide (allowing for Boland's biases) to the various theories, crackpot and otherwise, of pre Columbian contacts with the Americas, that were known almost 60 years ago.

The next recorded visitor, one who came by design and not by accident, was a Chinese who sailed across the Pacific to bring the message of Buddhism to the barbaric peoples of this land. He arrived in a.d. 499.

Hoei-Shin was one of many. The evidence that he—and many other Asiatics—visited America exists. I offer but one further proof that he was here. I offer merely a single photograph, and place no parallel beside it. It is one of the famous "laughing heads" of Totonac, near Veracruz (Plate 16). In Totonac dwelled a number of extremely fine artists. Their work is different from other Indian art expres- sions. And I think they specialized in portraits. I also think this laughing head is a portrait of a visiting Chinese.

It may even be old Hoei-Shin himself. 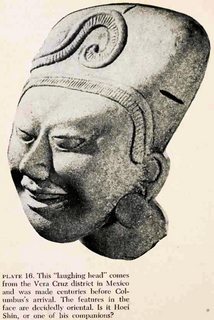 Of course there has been a lot of discussion of various possible pre Columbian contacts with the Americans since then.

For example, there is the story of how Mansa Musa became the ruler of Mali. My answer here:

Apart from the White Ship in 1120, have there been any other maritime disasters in which an heir to a throne and/or many notable people died?2

quotes Mansa Musa on how his predecessor's sea expedition vanished. And I don't remember whether Boland's book mentioned this and speculated that the Malian expedition may have reached the Americas and settled there. I do know that is a present day speculation.

And I have heard of a theory that the similarity between Japanese and Peruvian pottery styles about 4000 BC could be explained by Japanese fishermen being blown across the Pacific by a storm. I think that theory is younger than Boland's book.

7
Apart from the White Ship in 1120, have there been any other maritime disasters in which an heir to a throne and/or many notable people died?
5
Why was Madagascar settled by far-flung Austronesian seafarers?

22
What is the state of the art historical analysis of claims that Carthaginians discovered America?
20
Is there a possibility that the Islamic civilization visited America before Columbus?
21
How did people realize that America was a different continent?
7
Is there any evidence that the book of Isaiah was written before Cyrus?
14
Is there contemporary evidence for the Roman Kingdom?
3
Did any Chinese warlord claim the mantle of the Beiyang government after 1928?
18
Why wasn't awareness of Australia more widespread in pre-colonial Asia?