Could homo erectus have migrated to North America? [closed]

I was reading about Virginia McIntyre's claim of finding 200,000 year old artifacts at Hueyatlaco. There's also the Calico early man site with artifacts around 250,000 years old. Is it possible that H. erectus migrated across a land bridge before the last ice age? Skeletons found in Java and China indicate that H. erectus traveled long distances so it seems plausible.

There's no feasible route to the Americas at their level of technology that doesn't go through the Beringa (NE Sibera/Alaska) area. The period in question covers an unusually long interglacial, but there was a colder period in there where the land bridge would probably have been available (around 225,000 years ago)

However, it is super cold up there in the winters even today, and would have been far worse at any time the land bridge was exposed. There's no evidence of that species living any further north in Asia than Korea. In fact, their known population map looks suspiciously like they perhaps might have had some access to crude clothing (or perhaps some evolved way to deal with temperate winters?), but not the ability to make anything that would survive a Siberian climate. 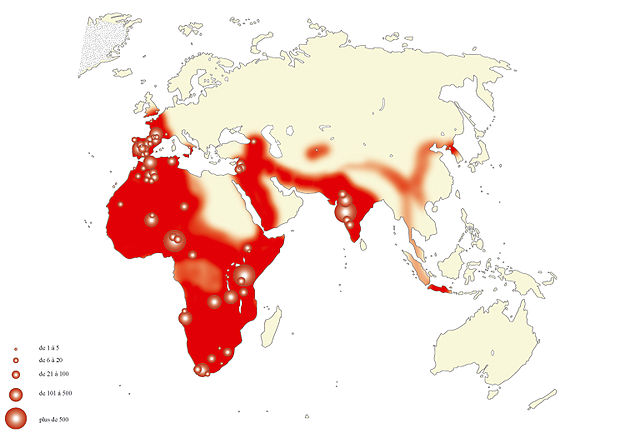 Map of the Arculean culture

Note that by the time in question, HE was probably already well on the decline. After about 300,000 years ago, the only dated sites for that species that have been found are on the tropical island of Java. Our first evidence of sewing needles doesn't arrive until the Sapiens/Neanderthals/Denisovians line (our direct ancestors), who are also the first hominids shown to be living in Siberia.

One thing you may note is that this means there were no known hominid species on this earth available to be the heroes of our story about walking into the Americas around 200,000 years ago. That's a little suspicious, isn't it?

Well, it turns out that the datings people like to give for human presence at Hueyatlaco and Calico are highly controversial.

In Calico's case, the only thing found were tool-escque rocks. Attempts to statistically measure their likelihood of having been human-made came up ruling that they were probably not.

In Hueyatlaco's case, they are definitely human tools at that site, but we don't really know the date of them with any certainty. There were concerns about cross-contamination from the start, and different techniques have been yielding contradictory results. People have been giving dates ranging from 18,000 BP to 780,000 BP. The smaller dates would still be quite early, but they'd at least be consistent with the ability for Homo sapiens* to have been the migrants.

* - Technically the taxonomy is still a bit up in the air, but since we know they interbred, and many of us even carry their DNA, I'm one of those who prefers to consider Denisovians and Neanderthals to be a Homo sapiens subspecies. "Anatomically modern humans" would be Homo sapiens sapiens

Not the answer you're looking for? Browse other questions tagged north-america prehistory or ask your own question.

71
Why Were Madagascar and New Zealand Discovered So Late?