In the 19th century, do we know how armor changed with respect to guns of the time?

I know that the 19th century was relatively peaceful in Europe according to Wikipedia. (https://en.wikipedia.org/wiki/Industrial_warfare#Land_warfare) Interestingly, industrial technology has aided in weapon technology during this time however. Examples: around 1825 percussion caps were in use and in 1840 guns began to use pin-fire cartridges. (https://www.pbs.org/opb/historydetectives/technique/gun-timeline/)

What I am having difficulty with however is finding the evolution of this technology, and the result on the use of personal armor. Do we know what the cause and effect is between weapon use and use of armor? We know armor was gradually discarded to safe on weight, but do we have records on this?

The sites aren't inadequate, but very focused and lacks a general view, which makes it very hard for me to get a general idea of warfare during this time. The research so far has shown the dates of certain inventions (such as the invention of pin-fire cartridges). These dates don't give the period when it was used, and what the effect was on the use of armor.

Question: In the 19th century, do we know how armor changed with respect to guns of the time? ..... it very hard for me to get a general idea of warfare during this time.

Short Answer:
Beginning in the late 1400's guns made armor more prevalent on the battle field. Not just knights, heavy calvary or nobles but common infantry would fight in heavy plate. This necessitated armor becoming cheaper, less decorative, made from standard interchangeable components to bring down costs. Rather than being custom made for an individual it was produced in bulk and stockpiled to be used by by common soldiers. This was called munition armor, or munition grade armor. By the end of the 17th century as firearms tactics and the weapons themselves improved all forms of defense including personal armor for infantry to became devalued. Troops were drilled to concentrate their fire and to stay in formation as they marched into range of enemy formations which were doing the same, all without armor or protection. Napoleon in the early 19th century exemplified this philosophy as he always chose to be on the offensive. Military doctrine was one which valued offensive action. Offense had so many advantages it was believed that all defense was counter productive. Anything which did not contribute to offense or encumbered a unit's offensive potential was abandoned. Body armor for infantry would thus not be used in the 18th to the early 20th century.

Some Plate or heavy armor for Calvary lasted into early 20th century. Cuirassier, a form of heavy cavalry which used Curas Armour. The breast and back armour without the arms or visor. This form of heavy cavalry was still in use and saw action early in WWI. It was really more of an exception though, most cavalry chose the increased mobility and versatility of fighting unarmored. 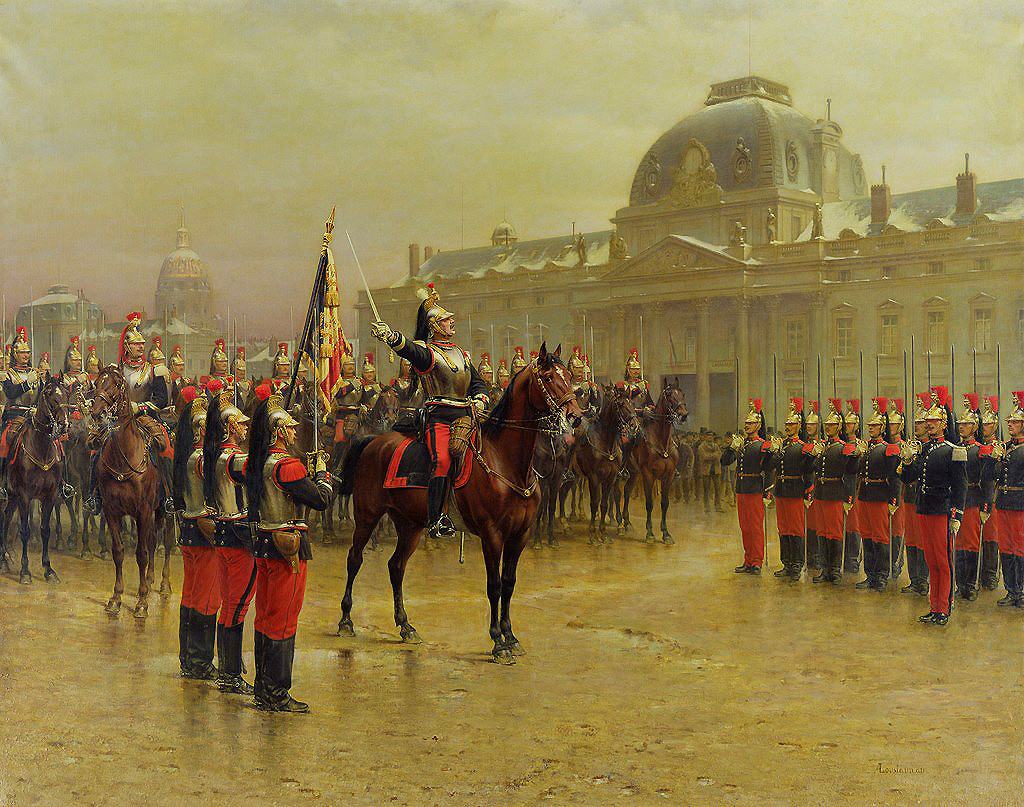 Detailed Answer:
The first European battle in which firearms played a decisive role was the Battle of Cerignola (1503) between Spain and France and the weapon used was called the arquebus.

Battle of Cerignola
... one of the first European battles won by gunpowder weapons, as the assault by Swiss pikemen and French cavalry was shattered by the fire of Spanish arquebusiers behind a ditch.

Plate armor coexisted with firearms on the battlefield, up until the mid 1600s. Plate armor (breast plates) was routinely tested against fire arms by the armorers. The dent from the bullet being engraved to draw attention to it as a demonstration of the armor's quality and effectiveness. This was called proof testing or just proofing. Leeding to the expression bullet proof.

The Arquebus
As a low-velocity firearm, the arquebus was used against enemies who were often partially or fully protected by steel-plate armor. Plate armor worn upon the torso was standard in European combat from about 1400 until the middle of the 17th century. Good suits of plate would usually stop an arquebus ball at long range. It was a common practice to "proof" (test) armor by firing a pistol or arquebus at a new breastplate. The small dent would be circled by engraving to call attention to it. However, at close range, it was possible to pierce even heavy cavalry armor, although penetration is heavily dependent on the power of the arquebus and the quality of the armor.

Japanese cuirass with bullet marks from being tested for resistance to firearms. 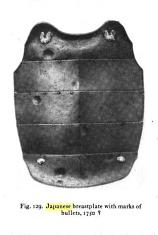 .
With the introduction of Firearms, Armor got more prevalent on the battlefield. In the prior age of knights armor was custom made, intricate, highly personalized, decorative, made of steel and highly expensive. It was used by nobility. In the age of guns munition armor(heavy plate) was manufactured to be less expensive. It was made from standard patterns, interchangeable parts and often made of inferior metals like iron rather than expensive steel. Munition armor was made to be stock piled for use by common soldiers.

Early Modern Warfare
Since a firearm requires little training to operate, a peasant with a gun could now undermine the order and respect maintained by mounted cavalry in Europe and their Eastern equivalents. Although well-smithed plate-armour could still prevent the penetration of gunpowder-weapons, by 1690 it had become no match for massed firearms in a frontal attack and its use ended, even among the cavalry. By the end of the 17th century, soldiers in the infantry and most cavalry units alike preferred the higher mobility of being completely unarmoured to the slight protection - but greatly lessened mobility - offered by wearing plate armour

In the early 19th century, Napoleon demonstrated the value of maneuverability, coordination, and offense action, in the age of firearms. Napoleon always chose to attack rather than defend and this became an unquestionable doctrine for military theorists in the 19th and early 20th century, an age mostly devoid of personal armor.

Napoleon's Strategy
The Emperor preferred to fight offensively under all circumstances, even when on the defensive. At Austerlitz he did actually stand on the defensive, lured his enemies into a trap, and then attacked.

"No one should imagine that sound heads are common in armies. Offensive generals are rare among us; I know only few, and, nevertheless, it is only to these that ... a detachment can be entrusted." - Frederick the Great

For those who came after Napoleon, all forms of defense became devalued. It was believed that so overwhelming was the advantage of troops on the offensive, that anything defensive in nature was counter productive and would cost lives. The culmination of this became known as the cult of offense among military theorists, which was influential until WWI.

Heavy body armor in some Calvary lasted into the 20th century. As heavy Calvary gave up lances and adopted firearms the knights were replaced in the 19th century by Cuirassier, a form of heavy cavalry which used Curas Armour. The breast plate and back armor without the arms or visor. This form of heavy Calvary was still in use and saw action early in WWI.

I think your question missed it by about a century, give or take. The last generalized use of armor by Western armies is around the 16-17th century, with mostly breastplates and helmets. By the 18th, I am pretty sure it had almost entirely gone and the 19th didn't seem to have much at all. Helmets on cavalry, at most and probably decorative even then.

Armor stays pretty much away all the way to the 20th century, with its first comeback during WW1, in the form of helmets. Conveniently, the only thing exposed of a man in a trench is his head, so a limited bit of thick armor to protect our most vulnerable body part starts to make sense. Look at the British helmets too, they're made to protect against top shrapnel.

Starting in mid-70s according to wikipedia, we start to have new materials like Kevlar or ceramic plates. I believe slight before that, the first use of body armor were cases like helicopter gunners where the person is both exposed and static. And Western armies are largely not conscripts anymore - smaller numbers mean better equipment is possible/necessary as a force multiplier.

So now we have body armor back, but it took 2-300 years to get there, and contributing to that is also the general drift towards 5.56mm/.223 ammo. Accurate, lightweight and good for statistically probable engagement ranges, but also easier to stop than high powered 7.62 rounds. The pendulum has swung back, somewhat, to defense.

Funnily enough, even the tanks went through almost the same evolution. For a while in the 60/70s, armor piercing capability was sufficient enough that Gen2 tanks like the Leopard 1 or T72s privileged smaller sizes, speed over the weight of armor. Why bother, if it won't work protect you reliably anyway?

Then, with new material science, came composite armor with the Challenger 2 and M-1 tanks. Highly classified but a large dose of non-steel ceramic seems to be part of the recipe. And they seem to work very well - the M1 has had almost no combat losses on record until the Saudis came along to screw that up against the Houthis. So tanks from the late 80s on have again gained (a lot of) weight. They might lose it again to allow for easier air transport, we'll see.

Bottom line: against firearms, armor is likely to be used if a country can manufacture/afford it at scale, if it makes a big enough difference against likely threats and if mobility isn't too compromised. Right now we are there, but who knows what the future holds with lasers or smart munitions?

Not the answer you're looking for? Browse other questions tagged 19th-century weapons armour or ask your own question.