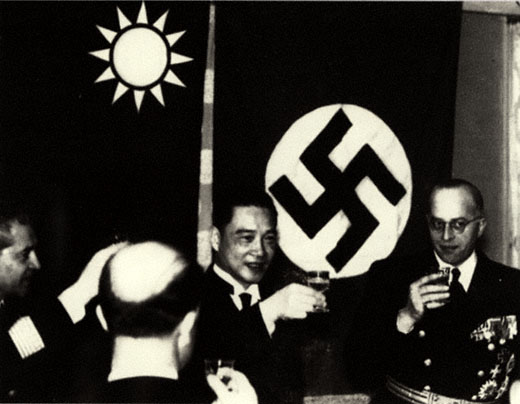 He was Heinrich Georg Stahmer, then the Ambassador to the "China" of Wang Jing Wei (not Chiang Kai Shek's China). According to Wikipedia,

"In October 1941, Stahmer was appointed as German ambassador to the Chinese reorganized national government under Wang Jingwei, established in Nanjing by the Japanese occupation,and remained in that position until late 1942. According to Japanese diplomatic cables, Stahmer was "excited" for his new posting as ambassador to China, a posting which was confirmed by Hitler, and that he would seek to act in accordance with both Germany's interests and those of the Japanese government during his tenure in China."

Immediately afterward, in 1943, he was appointed as Ambassador to Japan. Prior to his appointment to "China," he had helped to bring about the German-Japanese alliance.

On the left maybe the Italian ambassador Taliani de Marchio. Possibly the picture is related with the situation in January 1942 when both the Italian and German ambassadors in China delivered, into the hands of Wang, their official credentials as ambassador.