How was the ceremonial mace presented to unruly members of the US House of Representatives?

In an answer to a recent question, it was said:

The Sergeant at Arms, upon instructions from the speaker "presents" the mace to the unruly party.. to restore order.

i.e. was the unruly party presented with the business end of the mace as if it might be used upon them, or were they presented with the hilt as if challenging them to take the mace? Or some other way such as simply standing in front of them while generally holding the mace?

How was the mace presented on the occasions it was used?

How this is done exactly may depend on the circumstances but

From the examples below, there is no evidence that the Sergeant at Arms points the mace at the offending party / parties (never mind hits, though some might think it a good idea). Rather, it is a symbol of his authority and, as T.E.D. noted in his comment below, he uses a two handed grip with the mace most likely held in an upright position. 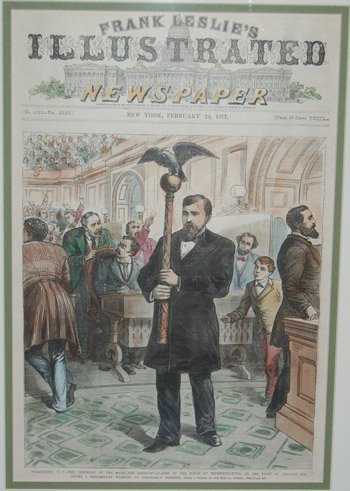 Thus, by 'present', it would appear that this simply means the Sergeant at Arms holds the mace in front of the offending members so 'presents' can be interpreted to mean 'shows' by holding it up and facing the errant member or members.

The most infamous floor brawl in the history of the U.S. House of Representatives erupted as Members debated the Kansas Territory’s pro-slavery Lecompton Constitution late into the night of February 5-6. Shortly before 2 a.m., Pennsylvania Republican Galusha Grow and South Carolina Democrat Laurence Keitt exchanged insults, then blows. “In an instant the House was in the greatest possible confusion,” the Congressional Globe reported. More than 30 Members joined the melee....Speaker James Orr, a South Carolina Democrat, gaveled furiously for order and then instructed Sergeant-at-Arms Adam J. Glossbrenner to arrest noncompliant Members. Wading into the “combatants,” Glossbrenner held the House Mace high to restore order.

The pro-slavery Keitt was a controversial figure who, two years earlier, had brandished a pistol in a near-empty senate while a colleague beat an abolitionist senator with a cane (see the Caning of Charles Sumner).

The Mace of the House of Representatives of the United States has several examples of when the mace was used. For example, in 1880, two members resorted to "menacing words and threatening actions." Other members then tried to separate them, "whereupon the Sergeant at Arms moved about the House with mace and order was restored."

In 1885, Rep. John D. White of Kentucky, when "confronted by the Sergeant at Arms bearing the mace" after using abusive language, "promptly took his seat."

During World War I, two members confronted each other, whereupon "the Sergeant at Arms came between them with the mace". The same source also notes that

There were, formerly, a good many instances of disorder on the floor of the House when, by direction of the Speaker, the Sergeant at Arms passed up and down the aisles, mace in hand." 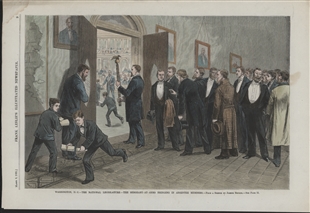 "Newspapers of this period inform us that a scene such as this was not uncommon during night sessions of the House. “However faithful members may be in the performance of their duties during the day sessions, they are very apt to recognize the claims of “society” in the evening.” Here, the Sergeant at Arms, with the House Mace held aloft, led Members retrieved from dinners, receptions, and other social events back to the Chamber in order for the House to achieve a quorum." Image from 1881

Not the answer you're looking for? Browse other questions tagged united-states political-history or ask your own question.

13
Why does the US House of Representatives have a ceremonial mace, but the Senate does not?