What flags are on display in “Scene at the Signing of the Constitution of the United States”?

In Scene at the Signing of the Constitution of the United States, there are four flags on display to the right of George Washington. One of these flags is the 13 star United States flag, but what are the other three? 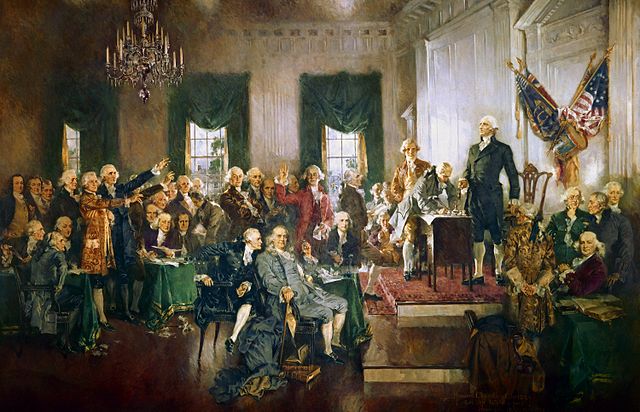 According to the page Signing of the Constitution, from the Architect of the Capitol web site:

The artist said that the flags he depicted are the Stars and Stripes, one from a Maryland dragoon regiment, and regimental colors from Massachusetts and New Hampshire.

Inevitably, the Internet being what it is, the claim is repeated verbatim by more than a dozen other websites.

The artist was certainly interviewed at the dedication of the painting in May 1940, although I was unable to find a transcript.

Interestingly, Dr. Gordon Lloyd has created "a series of Online Exhibits on the American Founding hosted by the Ashbrook Center’s website". One of these "Online Exhibits" is a Lesson Plan for Christy’s “Signing of the Constitution of the United States".

On that page, Natalie Bolton and Dr Lloyd make no mention of any observations by Howard Chandler Christy on the subject of the flags. Instead, the article contains the following statement:

Behind Washington, Christy has a painting of four flags and a drum. What these symbols represent is, of course, also open to interpretation. One of the three flags is clearly the one supposedly sewn by Betsy Ross in 1776 at the request of Washington and this is the flag that has inspired all the other flags that have been adopted by the country. The other three flags and drum are more difficult to identify, but they probably represent the transition from the battle with the British to the discussions taking place in the room, a movement from revolution to constitution.

So, although the claim that the flags accompanying the Stars and Stripes were regimental colours from Maryland, Massachusetts, and New Hampshire seems credible, and there is certainly nothing about the appearance of the flags themselves that looks to contradict the claim, the lack of a citation to support the claim on any of those sites leaves room for doubt.

Not the answer you're looking for? Browse other questions tagged united-states us-constitution or ask your own question.