Were there trains to anonymous concentration camps?

At the start of this year, my family visited Terezin Ghetto and camp - the middle daughter was writing a school report about children in WWII. There were many dreadful and surprising pieces of information that we had not met in books. But all of them were explainable and understandable, at least in that horror context. All except one.

Listening to the statistics of trains from Terezin ghetto to various concentration camps (not reading, it was a movie), it was easy to notice, that even going to Auschwitz was not the worst variant. 2-3% of people from every train to Osvetim remained to live. (Due to the fast overtaking of Auschwitz by the Russian army). There was not a single train to the known destination, all passengers of which died.

But among other trains with known destinations, there were trains to unnamed and unnumbered camps. Firstly, it is strange by itself, why Germans with their Ordnung hadn't registered the target of several (4-6, I don't remember the exact number) trains? Secondly, all the people sent to all these anonymous camps got lost. Not a single one remained. Obviously, these two points are not connected accidentally. Nazis were hiding something. Maybe, it was only one anonymous camp...

Notice, it is not about the "death trains", used to kill people at the end of the war, in 1945. It is another time, the peak of the war (42-44), tens of trains were filled and sent to named camps. And as for the death trains, they had passengers that were saved. The mortality was not 100%.

So, what were these trains to anonymous camps with 100% mortality?

Though it is going to be difficult to address information of which we only have your memory of a video as evidence of, I may have found information which matches your claim, and a possible explanation. (Again exceedingly difficult to know if this is relevant, but in this situation...)

A publication came up through searching, Theresienstadt 1941-1945: The Face of a Coerced Community By H. G. Adler, Jeremy Adler. Within this there is an area entitled Deportations to and from Theresienstadt, which appeared promising. On page 45 of my preview version there appears the following table: 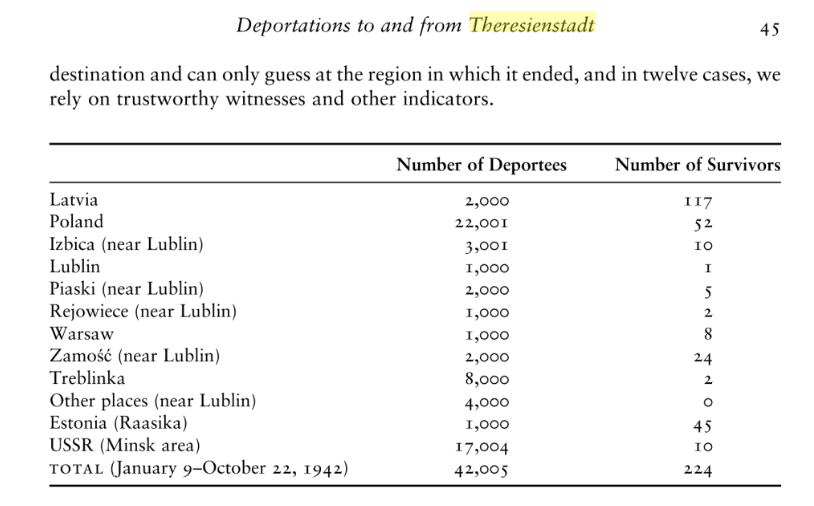 Note the line 'other places' with 4000 deportees and no survivors. This seems to correlate with the information in your query. The wording of your question seems to make it appear as if this information was being intentionally secreted by the Nazis, but from the wording in this document, it seems the information as to the locations these individuals were sent to simply has not been determined through later investigation.

"in four cases, we are not sure of the destination and can only guess at the region in which it ended, and in twelve cases we rely on trustworthy witnesses and other indicators."

So it would seem the mysterious destination represented by the film you observed is simply representing information which is unknown to the compilers of this data after the fact. If this doesn't serve to satisfy your query, it may at least indicate the data you are referring to...

(Looks like Terezin has an active web presence and has been presenting children's educational materials including a play concerning the children there. It looks like it may have been a great choice for your children to experience. I did not see anything showing the material you watched.)

Not the answer you're looking for? Browse other questions tagged world-war-two concentration-camps or ask your own question.