What is the earliest example of Aryanization in Germany?

In the book by Martin Goldsmith Alex's Wake which describes the experiences of his family in Germany and the Nazi Germany, he tells (on page 46) of the forced sale of his grandfather's house for a quarter of its fair market price in 1932 and says this is one of the earliest examples of Aryanization. Everywhere else I read that such sales did not even start until 1933.

I wonder if the author got the dates wrong or if this while not being technically/legally Aryanization was the result of Nazi influence on a local level or simply bullying by local officials.

In 1932 there were still Jewish judges and attorneys and professors -- I do not think the status of Jews had legally changed at all in Germany but if this is an accurate description of such an event occurring that year, it is very significant and I wonder what similar things might have happened before 1933.

(I did try to write to the author but the book is not new and there is no contact information that I can find for him.)

The date 1932 is correct in this case, but not as an example of the later quasi-official policy of 'aryanisation'.

Goldsmith could also see that the influence of the Nazis was considerable even before the actual assumption of power from the fact that his father was forced in the autumn of 1932 to sell the house and property in Gartenstraße to a party member and minister far below its value. In March 1934, he himself was asked to leave the conservatory in Sondershausen in order to make room for an "Aryan" student.

It is well attested, but a symbol of the already present local terror power the nazis exerted. In Oldenburg the NSDAP had 37,2, 48,4 and 46,5% of the votes in 1931–1932. 'Aryanisation' was on the agenda for them since the 1920s. (This very case brought a slew of slightly embarrasing, even smallishly scandalous errors during commemorative actions. Wrong address, even wrong name…)

The local newspaper, the plaque: 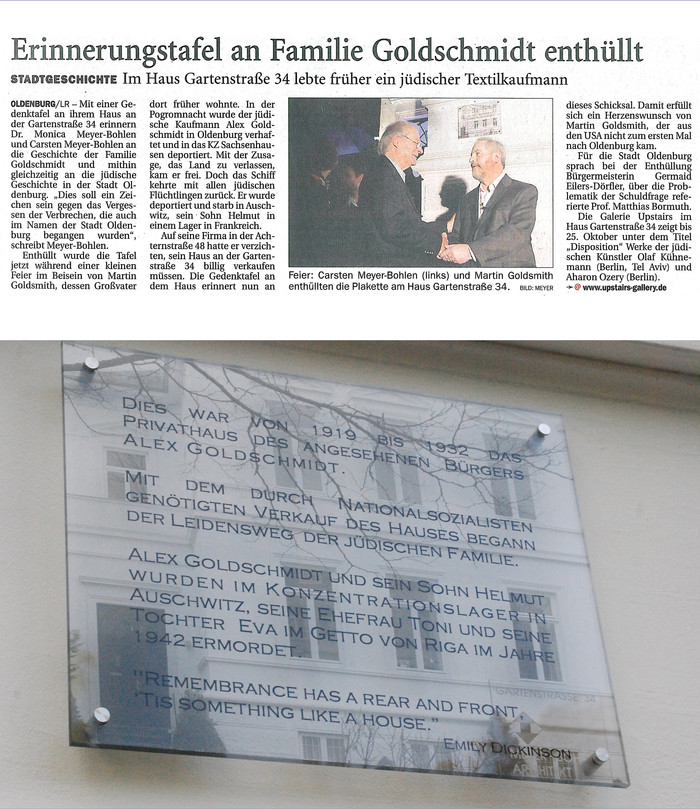 Some writers consider that the first kind of “aryanization,” which came to be a major feature of the early years of the dictatorship, was in fact already under way well before Adolf Hitler became chancellor of Germany on January 30, 1933. Avraham Barkai wrote: “The anti-Semitic boycott had already begun several years prior to the Nazi seizure of power and was intensified particularly during the 1929–1932 Depression. Both the appeal and the impact of this boycott were enhanced by the fact that Jewish economic activity was concentrated in a small number of especially prominent or crisis-prone branches of the economy.” Such areas included banking, which came under regular attack from the party for being intrinsically speculative and “Jewish,” but also department stores (which had the same reputation), the garment and shoe trade, and cattle dealing. Some Jewish business fields were vulnerable on purely economic grounds. Probably the most extreme example of a “pre-Nazi crisis” is the Leipzig fur trade, which collapsed during the world depression (see Chapter 5.)
— Harold James: "The Deutsche Bank and the Nazi Economic War Against the Jews. The Expropriation of Jewish-Owned Property", p35–36, Cambridge University Press: Cambridge, New York, 2001.

The first 'aryanised' company in the Saar was the Walsheim brewery. Even before the Germans in the Saar region voted with 90,73 for Hitler in an internationally recognised as free election, the Jewish owner was forced out in 1935.(PDF)

What is called 'Aryanistion' in common historical research started indeed only on 1. April 1933, formalised with the first specific law Law for the Restoration of the Professional Civil Service on 7 April 33, which contained an "Aryan paragraph".

While from April 1933 on these occurred sporadically, 'just drive out the Jews, withot their property, preferably; by local initiative form party officials, or local competitors, and other private, non-state actors, this development took up speed much after 9 November 1938.

At least until 1987 most such entities with switched ownership 'celebrated' these occasions as the 'foundational date of the company'. Recently, this was a little frowned upon…

Which house, company or other property is counted 'officially' as the first case of post 1933 'aryanisation', not by pure force but with may be a matter of definitions or opinion.

For example, the wide spread boycott of retailers – destroying the livelihood of their owners – started before but already in February 33 had some 'successes'. Small businesses, department stores and manufacturing had many 'aryanisation' techniques applied, not always as an early complete takeover.

The Pankow based Engelhardt-Brauerei was denounced as "Jew Beer" immediately, came predictably into financial troubles, but was fully 'aeyanised' only in 1934. Radio electronics Loewe had immediate trouble in 1933, founders and family members fleeing, board of directors 'complemented with Aryans' by April, yet English Wikipedia counts this as completed only for 1938… (But compare this misleading portrayal for that and the brewery with Christof Biggeleben (Ed): "Arisierung in Berlin 1933 bis 1945", Berlin: Netzwerk Unternehmensgeschichte. Berliner Forum für Unternehmensgeschichte, Metropol, 2007. (gBooks))

Not the answer you're looking for? Browse other questions tagged nazi-germany jews or ask your own question.