Why didn't all non-Russian states become independent during the collapse of the Soviet Union?

There are so many sub-divisions in the country who are not Russian in their language and ethnicity, Tuva, Dagestan, Chechnya etc. When states like the Baltics, Ukraine, and Central Asia were gaining their independence, why did they also not leave?

When Boris Yeltsin came into power he made several steps to render himself as a big proponent of local autonomy. In some cases Federal Government even signed Declarations with local governments. The idea was to renew this documents periodically but when Putin came into power this initiatives (moribund up to that time) were all gradually cancelled out or at least toned down.

Here's what Yeltsin told about Bashkiria for instance:

In may be centuries nobody spoke to national republics in such a friendly manner and that contributes to the lack of separatism to some extent.

Historically there was a huge difference between the level of autonomy of Soviet Republics and that of any national republics in RSFSR. Soviet republics enjoyed certain level of autonomy (to that extent to what we can talk about autonomy in a undemocratic, governed by a single party country with a planned economy, of course). Historically most of them belonged either to the sphere of influence of Russian Empire or constituted its autonomous parts.

This was not the case with RSFSR national republics though. Historically almost all of them were integrated earlier and/or in a more aggressive fashion. Among other things that lead to the fact that in the majority of that republics there was huge Russian population and even native population tended to speak Russian better than their native language.

For instance, roughly a half of population in Khakassia are ethnically Khakas, only a quarter of Adygea population are Adygs and so on and so on.

In a lot of cases local political elite just weighed all pros and contras and realized that they are pretty much ok with what we have as a regional leaders. Many of ex-Soviet party bosses just continued their careers as "democratic" leaders. For instance, the head of Bashkiria, Murtaza Rakhimov, came to power in 1990 and remained such till 2010. Another example would be Sherig-Ool Oorzhak who was head of Tuva from 1990 till 2007.

In some cases the was a common consensus that the attempt of separation even if it will be successful will lead to even more problems that no one was willing to be in charge of solving of. For instance, in a unimaginable case of successful secession Dagestan very likely would have end in a civil war. Dagestan is very diverse ethnically, local leaders were ok with the current status quo and were very worried that the fragile ethnical balance will be somehow broken.

Even in case of successful secession many of local republics would have end up as complete enclaves surrounded by Russia and without access to major water bodies. That would have made their further economic existence very challenging. 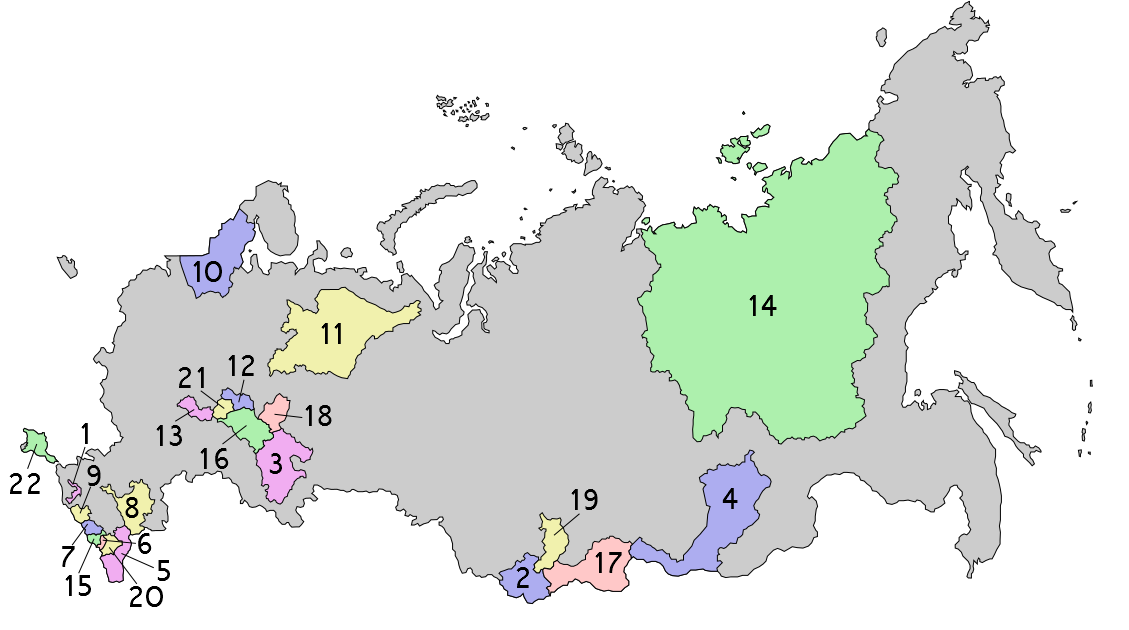 9
Was Nicholas II Romanov the last king of Poland?
11
How much of "Russia" was actually occupied by the Germans in World War II?
3
What did Russia do about Caucasus oil after the collapse of the Soviet Union?
12
What proportion of the population of Soviet Union were taken into custody by the state during Stalin's time?
28
Why is the late Russian Empire associated with Byzantium while having little in common with it?
22
How and why did e.g. Chechnya differ in status from entities like Armenia?
9
Did Nicholas II of Russia send telegrams demanding evacuation of Serbs?