How was the Karwendel railway important to Germany's plans for WW1?

While reading Max Hastings' book "Catastrophe 1914: Europe Goes To War", I was surprised by the following paragraph (emphasis added):

In 1912-13 Germany had declined to support a tough Austrian line in the Balkans: key elements of its own military preparedness were still lacking – the Rhine bridge at Remagen, the bridge at Karwendel across which Austrian heavy artillery could move northwards, the Kiel canal, a new Army Bill. Now [in summer 1914] those links were complete: Moltke's machine was at perfect pitch.

The reference to a "bridge at Karwendel" puzzles me. "Karwendel" is the name of a mountain range, an outlier of the Alps, along the Austro-German border. The only significant transport link crossing it is the Karwendelbahn railway line, which goes from Innsbruck in Austria to Garmisch--Partenkirchen in Germany over the 900m high Scharnitz pass. This railway does have several impressive bridges, so I guess Hastings must be referring to that. However, I can't quite fathom how this rather obscure little stretch of railway was important enough to play a role in Germany's decision for war or peace.

The line was built in 1912, so the chronology fits. However, the geograpy doesn't: the area of Austria around Innsbruck (the Tirol) is rugged mountain country, great for a ski holiday but not an obvious place for an armaments factory. I gather that the main industrial regions of pre-war Austria-Hungary were in eastern Austria and Bohemia (in the modern Czech Rep). Given the way Austria and Bohemia wrap around the south-eastern corner of Germany, both of these areas are actually easier to access from the German terminus of the Karwendelbahn than the Austrian.

So, why was the Karwendelbahn strategically important, and why would it make sense for Austrian supplies of war materials to Germany to be moved northwards along it?

German Empire and Austria-Hungary were allies and agreed for mutual support in case of war. That means Germany may rush South to help, or Austria may rush North to do likewise. And by then railways were a must for all armies. 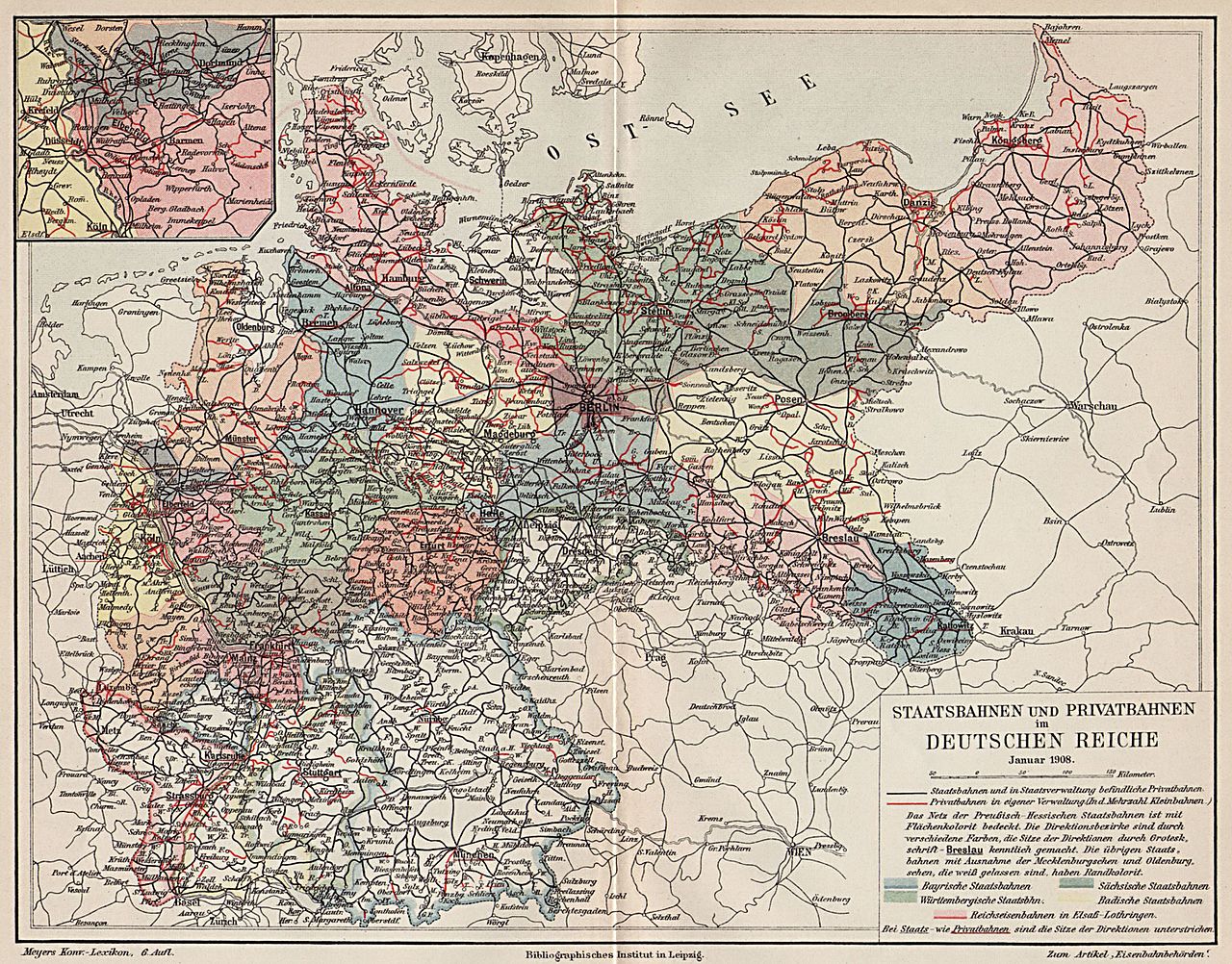 And specifically for the Royal Bavarian State Railways 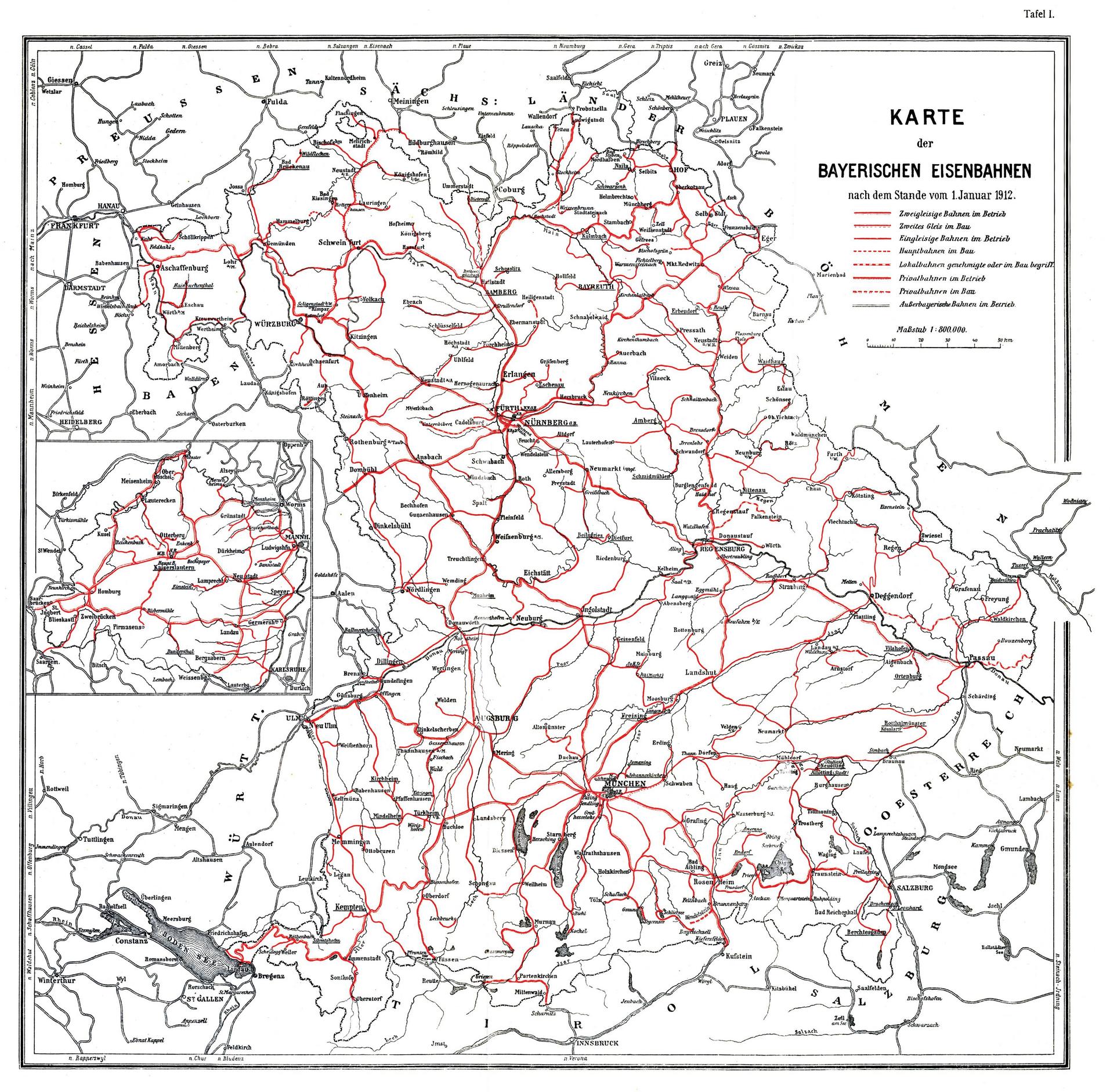 Thus the popularly so called Karwendel, which is really the Mittenwaldbahn conveniently plugs right in the middle of a huge gap in connectivity that is extra difficult terrain because of all the mountains: 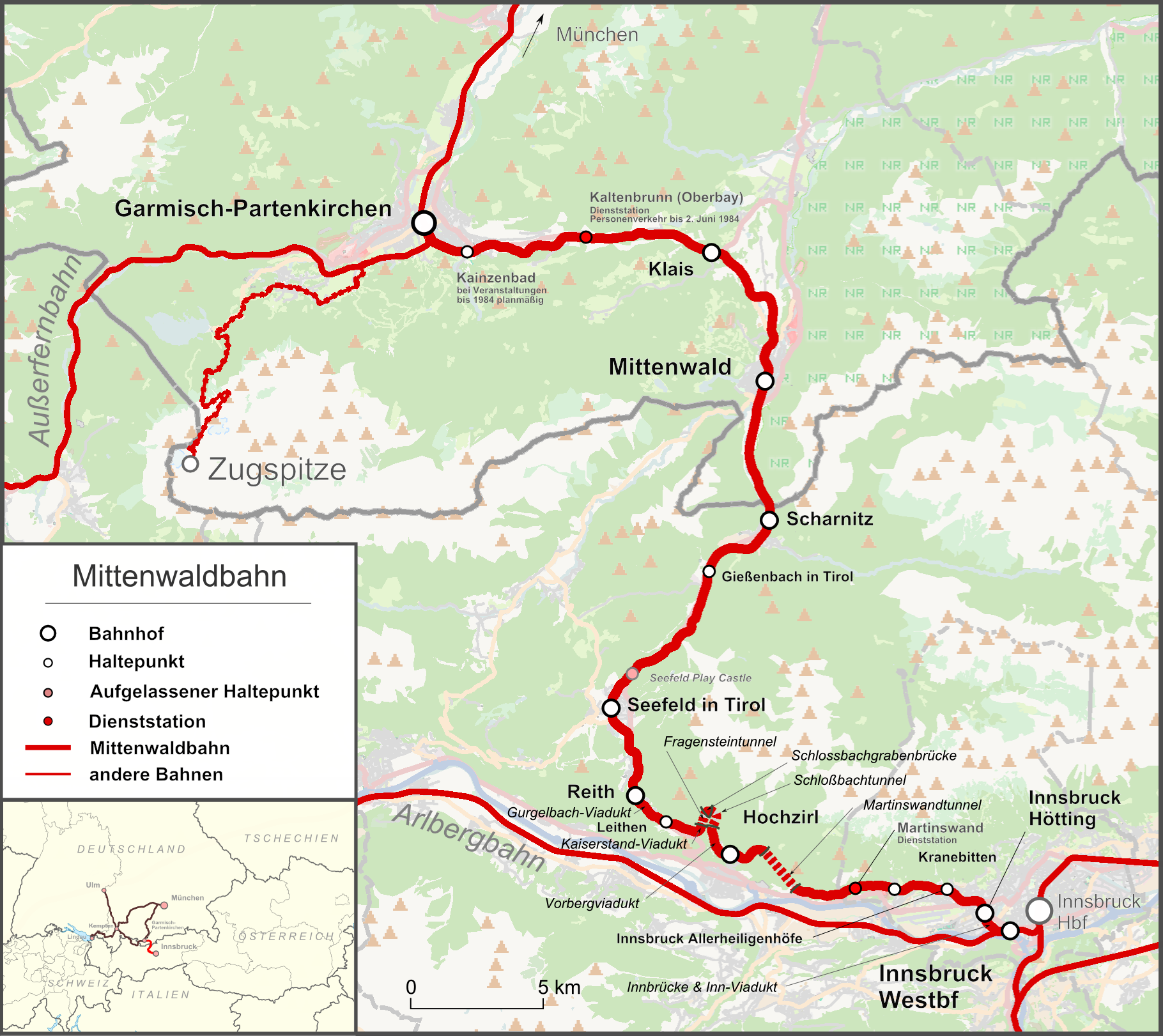 That was of utmost importance to protect against Italian ambitions. Remember that South-Tyrol, Slovenia etc were part of the Habsburg Empire and apart from Triest and Fiume the mainly Croatian coast Austria's access to the Adriatic.

The lowland connections along the Danube towards Salzburg are easier travel, but an enormous detour. While its true that Upper Austria was "the land of armament factories" (Steyr, Mannlicher etc.) and other main centers were Vienna, Prague and foremost Pilsen (Skoda), the actual manufacturing of any weapons and supply is only half the story. Deployment and moving around of existing weapons and supply is the other half…

From the Austrian side: 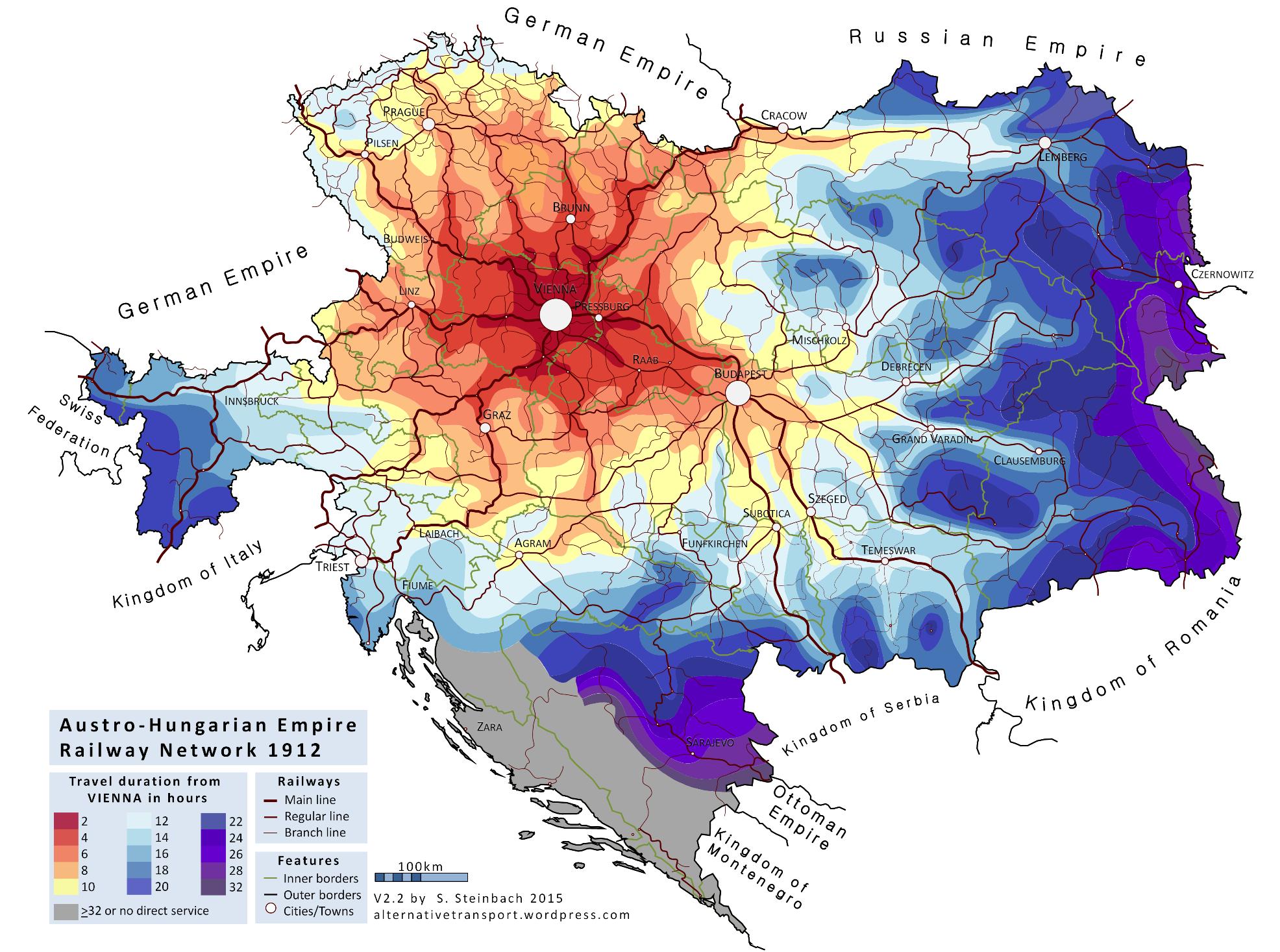 And for the mentioned cannons: 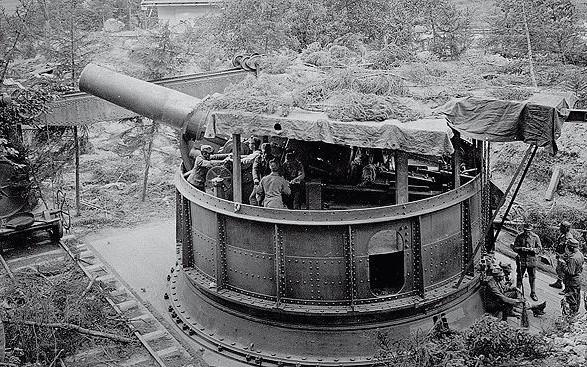 Those kind of guns aren't suited for being horse drawn.

The Austrian terminal of that railway is Innsbruck. The economical center for Western Austria. And since Emperor Maximilian's times an armaments center, of which until today 5 companies survive. The most famous probably Peterlongo, producing repeating guns "With strongest effect on thick-skinned animals." That company, Ganahl and Jester were a major supplier for the k.u.k army, producing revolvers.

This edge of the empire is also the hinterland for the Werk Valmorbia a fortified frontier facing the Italians. Innsbruck being the center for general staff XIV. Army Corps,

having numerous barracks and additionally a Landwehr Defence Command and first Kaiserjäger regiment.

One of the cannons alluded to in the book may have been the Skoda 305 mm Model 1911: 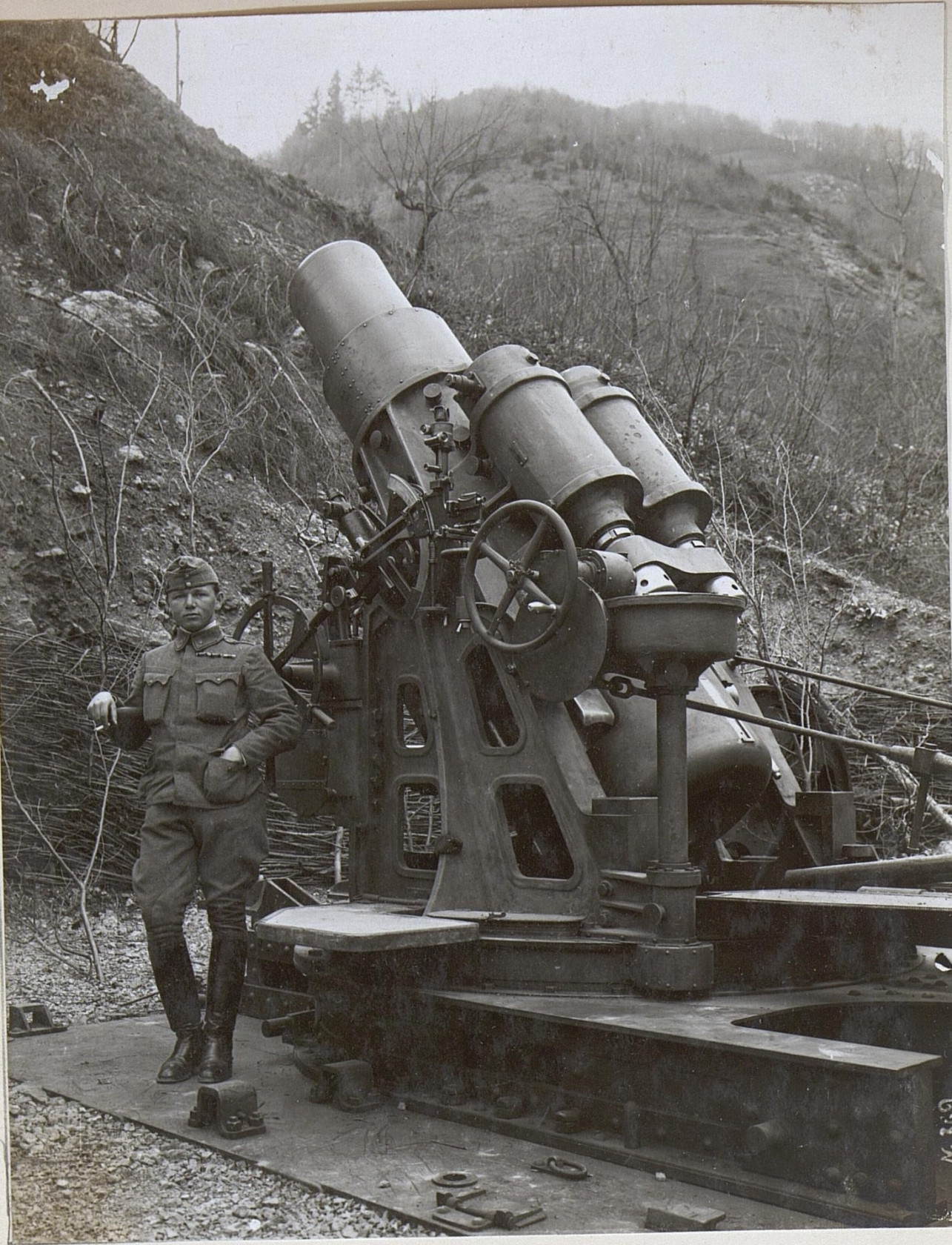 Eight Mörsers were loaned to the German Army and they were first fired in action on the Western Front at the start of World War I. They were used in concert with the Krupp 42 cm howitzer ("Big Bertha") to destroy the rings of Belgian fortresses around Liege (Battle of Liège), Namur (Fortified Position of Namur) and Antwerp (Forts Koningshooikt, Kessel and Broechem).

These weapons were borrowed together with two half-battalions (Krakau & Görz-Wippach), who both fought a well before Austria declared war on Belgium.

More on these types of heavy guns here, here, here and here. A short description of their use and admitting explicitly to use Austrian guns at Namur is the German account of the first weeks of the war in Der Weltkrieg 1914 bis 1918, Die Grenzschlachten im Westen (1. 1925), (p218).

Note that the Wikipedia quote seems incorrect in associating the Austrian guns with Liege. It seems that only at Namur they really saw action (Cf. Clayton Donnell: "Breaking the Fortress Line, 1914", Pen and Sword Military, 2013. (p43))

And if you look at the map for the battalion from Görz-Wippach, you'll find that town Wippach in Slovenia now and Görz in Italy. Meaning the shortest possible route to Belgium was via the new railway…

Not the answer you're looking for? Browse other questions tagged imperial-germany austria-hungary strategy railroads or ask your own question.

11
How was Germany's border decided?
19
Why was Germany held accountable for WW1?
6
How did the Railway Engines get to the Rainhill Trials?
10
How did Germany claim self-defense in WW1?
8
What trains were used on the Dakar-Niger Railway in the late 1950s and early 1960s?
6
Before the Great War, was the word "Poland" typically used to refer only to the Russian partition of Poland?
2
Why was Germany not broken up at the end of WW1
17
Besides Mexico, who was considered as a potential ally of the Central Powers?
4
How important was the Suez Canal to the Allies during WWII?
5
Was Walden Pond ever the primary source for rail transported ice?