What do we know about the location of Islamic schools in pre-colonial Africa?

There is much research in history and social science on how Christian missionary schools changed the formation of human capital in Africa, especially in sub-Saharan Africa. However, I find very little historical research on the role Islamic schools played in human capital formation in Africa. Discussions often center around Islamic institutions of higher learning (e.g. madrasas), such as research on Islamic centers in Timbuktu based on the Timbuktu Manuscripts. Less seems to be known about elementary Islamic education. That little is known about the role of Islamic education historically is also noted in a new book by Sriya Iyer (2019), Economics of Religion in India. She notes that there is little historical data on Islamic education. Much of the research on Islamic education in pre-colonial Africa seems to be driven by clever guesswork.

My question is quantitative or geographical. What historical data or maps (published or in archives) do we have on the distribution of Islamic schools in pre-colonial Africa or in Africa after the pre-colonial era? I am not looking for a set of examples. I am looking for historical or contemporary attempts at mapping the historical geographic distribution of Islamic education in Africa (compare with the map referenced below).

From my perspective, it would be optimal if we had historical data on Islamic schools at the beginning of the 1900s that is comparable to the historical data we have on Christian missionary societies in Africa, see Ethnographic Survey of Africa - showing the tribes and languages, also the stations of missionary societies from 1925. With better historical data, we could improve our understanding of religious competition in Africa, and the role of Islamic educational institutions on literacy, social and political development.

(My attempt at answering this question has been to see if colonialists at some point mapped the location of Islamic schools. So far I have skimmed relevant books on colonial Africa from the beginning of the 1900s at https://archive.org.)

The short answer is: where there was even a small Muslim population, there were usually schools for children at the elementary level, even in villages. Overall, we are thus talking about numbers which dwarf the number of Christian missions.

Without a basic religious education, Muslims cannot perform the duties required of them. Some of these schools were very small (less than 10 children); it is thus highly unlikely that maps or comprehensive data exist for large areas of pre-colonial Africa (never mind all of sub-Saharan Africa), but there is data for some regions in the early colonial period (links below).

The mobility of...Walking Qur╩Šan made Islam a familiar feature of West African life. Itinerant scholars, teachers, and preachers were known even in non- Muslim or religiously mixed areas....Large clerical families produced dozens of huff─üß║ō, many of whom would then go out to remote villages and open Qur╩Šan schools. The natural and social reproduction of these clerical lineages scattered scholars throughout the region, and by the eighteenth century, few villages lacked a Qur╩Šan school teacher.

The above does need qualifying a little in that the populations of the coastal regions of pre-colonial West Africa to the south of Senegal were overwhelmingly animist, and large areas of dense forest had very low populations. It is thus unlikely that there would have been many villages with schools in much of the forest zone. 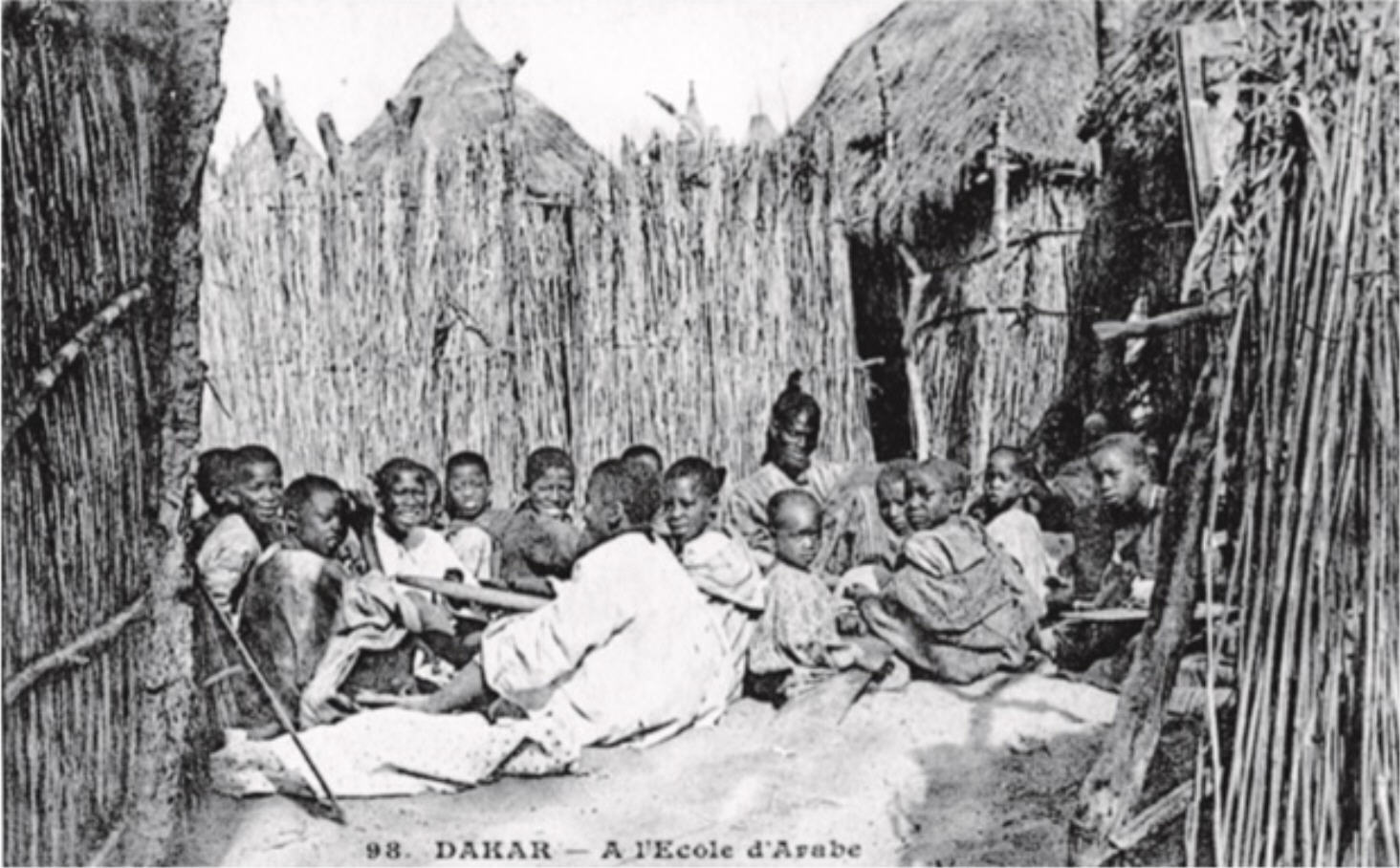 In Zanzibar in East Africa, the number of Qur'an schools for children (known locally as vyou) "increased manyfold" under Omani rule. Higher education, though, was much more restricted and generally only available to local elites. Similary, in the Sudan,

By the early nineteenth century a rough hierarchy of religious "schools" existed in the region, with most villages having a place (usually a mosque or a teacher's home) where children learned the Arabic alphabet and how to read and write passages from the Koran.

Looking at contemporary sources, the Scottish explorer Mungo Park (1771 - 1806), in Travels in the Interior of Africa commented on the ready availability of schools in towns. Also, during the early colonial period, Paul Marty (1882 - 1938) wrote a series of volumes on Islam in what was then French West Africa, including some fairly detailed data on the numbers of schools. See, for example:

A word of caution: Paul Marty was a military officer and colonial official, not a scholar, and he often had a poor understanding of what he was writing about. Also, some of his views are highly offensive and demeaning (in my estimation, more so than most other European writers of the period). Nonetheless, you may find his data and maps useful. For example, there's this table showing the number of schools and pupils in northern Ivory Coast in 1919: 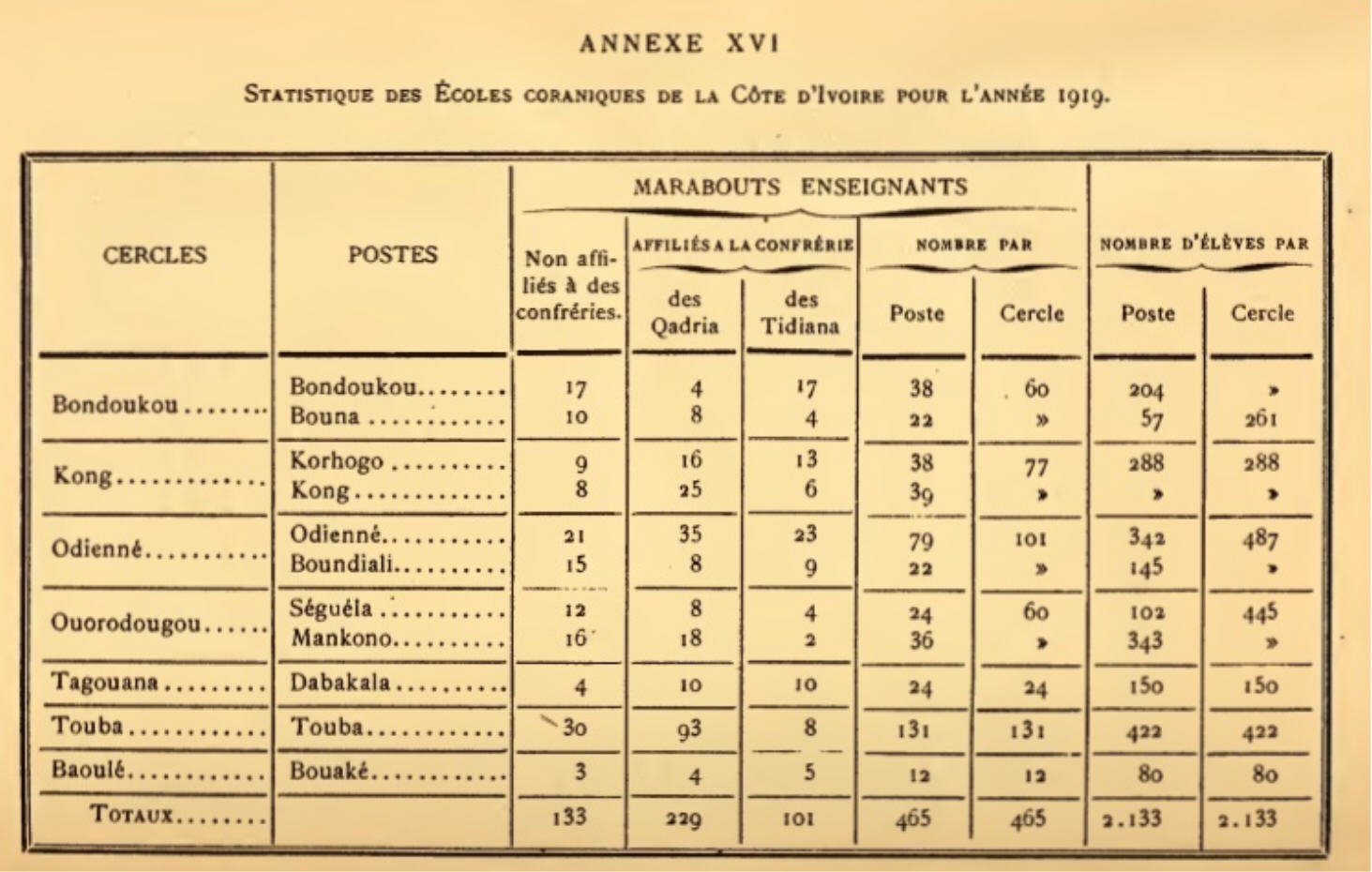 The widespread existance of schools for Muslims, known variously as kuttab, maktab, maktaba, Qur╩Šan schools, ecoles coraniques, ecoles maraboutiques etc., makes it unlikely that a map plotting them exists for all of sub-Saharan Africa; there were simply too many in predominantly Muslim regions. Also, mosques often had schools attached to them.

One way of getting a geographical handle on elementary schools is to look at data for the percentage of Muslims in different regions of sub-Saharan Africa. The maps below give an idea of the reach of Islam before the colonial era and for 1900. However, we probably cannot assume an exact correlation between Muslim population and number of Qur'an schools. 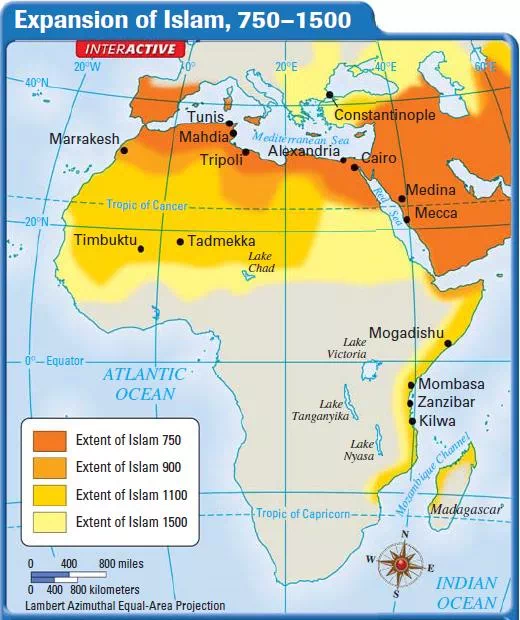 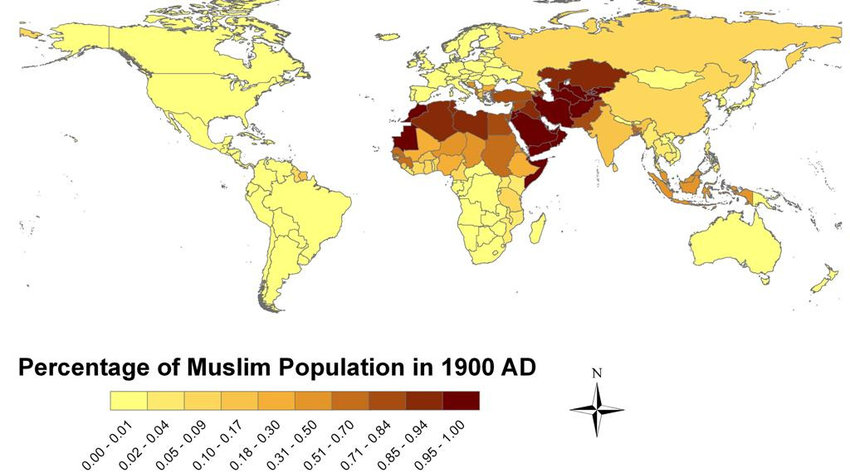 The extent of Christian missionary activity was partly determined by the presence or otherwise of Islam, but it's a complex picture. The coastal regions of West Africa were early targets as settlements were easily reached from the sea and Islam, by and large, was not present.

Nonetheless, attempts were made to set up missions further inland with varying degrees of success. The P├©res Blancs (White Fathers), founded in 1868 in Algeria, had a mission in Timbuktu until 1906 but, generally, attempts at 'invading' regions which had long been Muslim failed. In heavily Muslim northern Nigeria,

There were various attempts to establish mission stations in Northern Nigeria between 1855 and 1900, which were met with varying degrees of success

Ultimately, it was the British system of indirect rule which ensured an end to the missions

Further south, in Bugunda, it was a different. Although Islam got to the region first (mid 1840s), this did not stop Christian missionaries arriving in the 1870s & 1880s and halting Muslim penetration. The rivalry between Protestants, Catholics and Muslims ended up with Protestants coming out on top, favoured as they were by the British colonial officials. However, Islam did not disappear but Muslims were disadvantaged education-wise.

In what is now Tanzania, the situation was different again; despite German and the British colonization, Quaran schools actually increased in number due to improved communications but, ultimately, those educated in Christian missions came to hold an advantage in jobs and prospects. Details can be found in Philemon Andrew K. Mushi's History and Development of Education in Tanzania

6
What is so special about the location of Mexico City?
11
How much contact did Sub-Saharan Africa actually have with the rest of the world since the beginning of civilization?
21
Why did the pre-Islamic Arabs identify themselves as descendents of Ishmael?
6
How much did the western world know about the Soviet Union pre-WWII?
13
Do we know anything in detail about the effect of the black death on Sub-Saharan Africa?
24
Did pre-Columbian Americans know the spherical shape of the Earth?
2
What do we know about the !Kung "major gatherings" (up to 200 peoples)?