Are there depictions of horsemen in Roman Republic other than on the coins?

I wonder if there are depictions of horsemen who sit on the horses, with the horses that have two fore (front) hooves up in the air other than on the coins made in the time when Rome was a republic.

There is a depiction of such a statue on one of the coins (see below), but I could not find any statues, reliefs, mosaics etc. that date before Augustus came to power. There are many that were produced when Rome was an empire.

If indeed there were not any created when Rome was a republic, why? Or were they lost/destroyed? 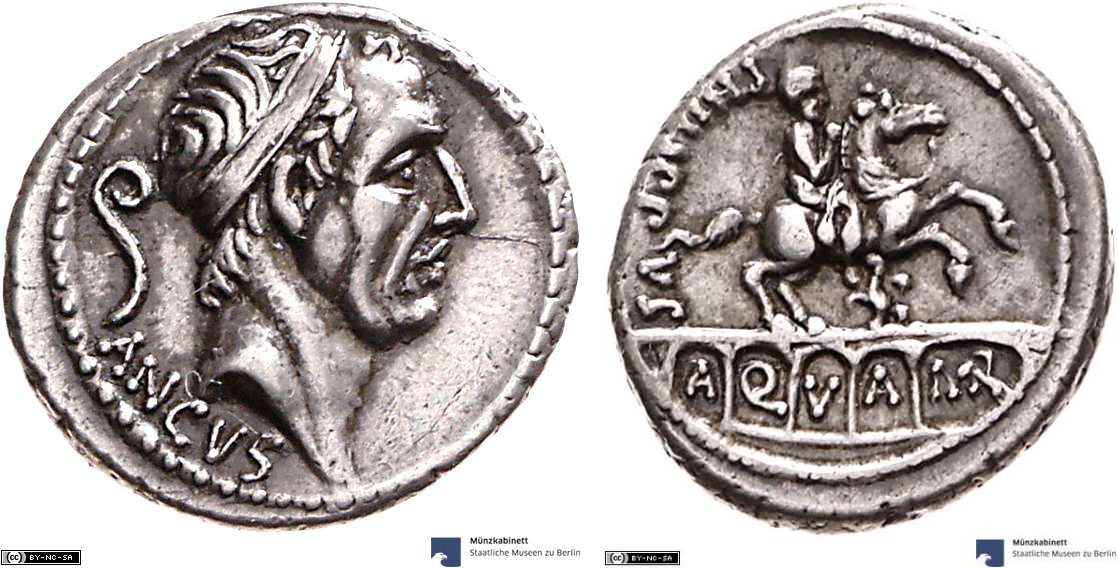 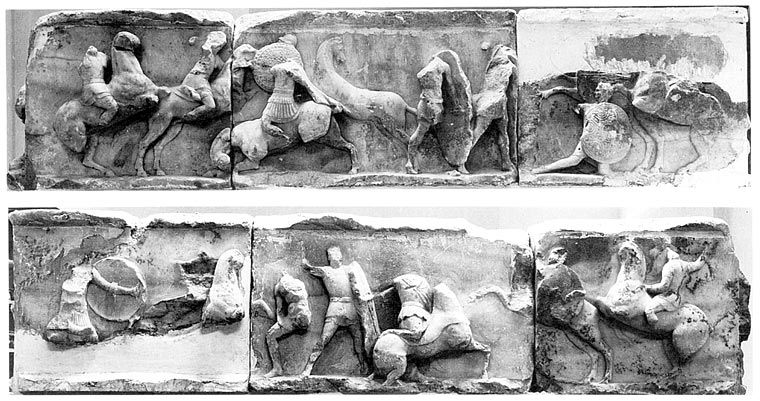 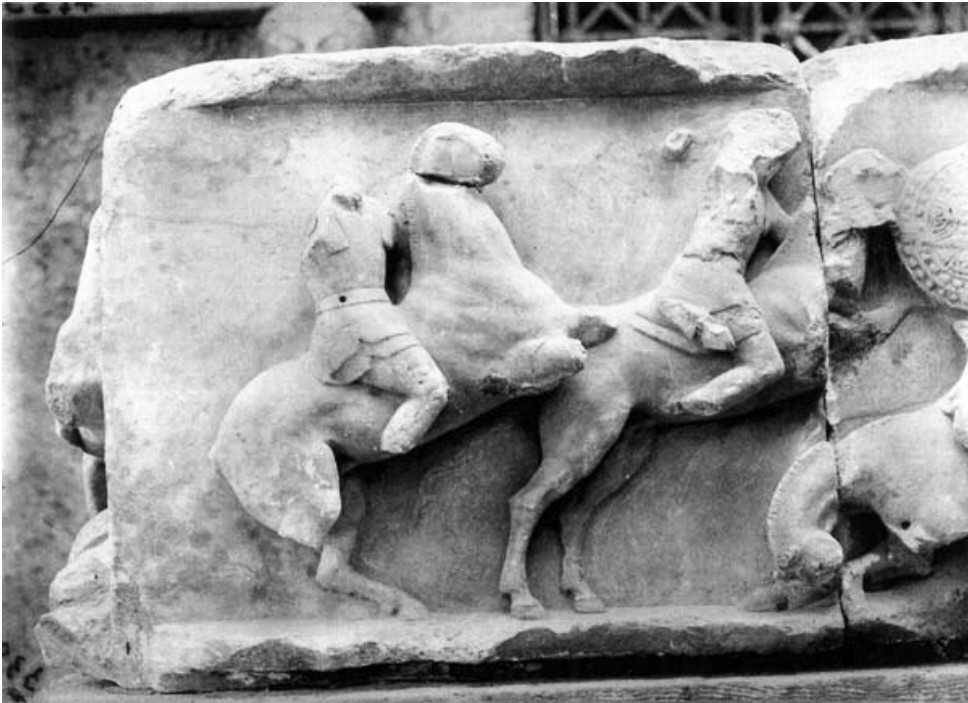 Monument of Aemilius Paullus was erected in the Sanctuary of Apollo at Delphi shortly after 167 BCE in order to commemorate the Roman victory at the Battle of Pydna over King Perseus of Macedon. 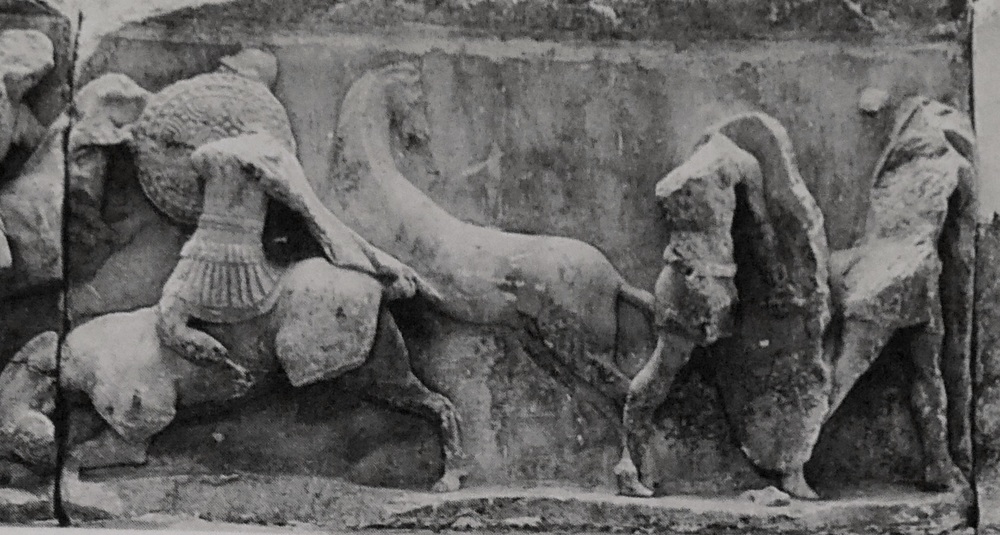 — Jeremiah B. McCall: "The Cavalry Of The Roman Republic. Cavalry combat and elite reputations in the middle and late Republic", Routledge: London, New York, 2002. 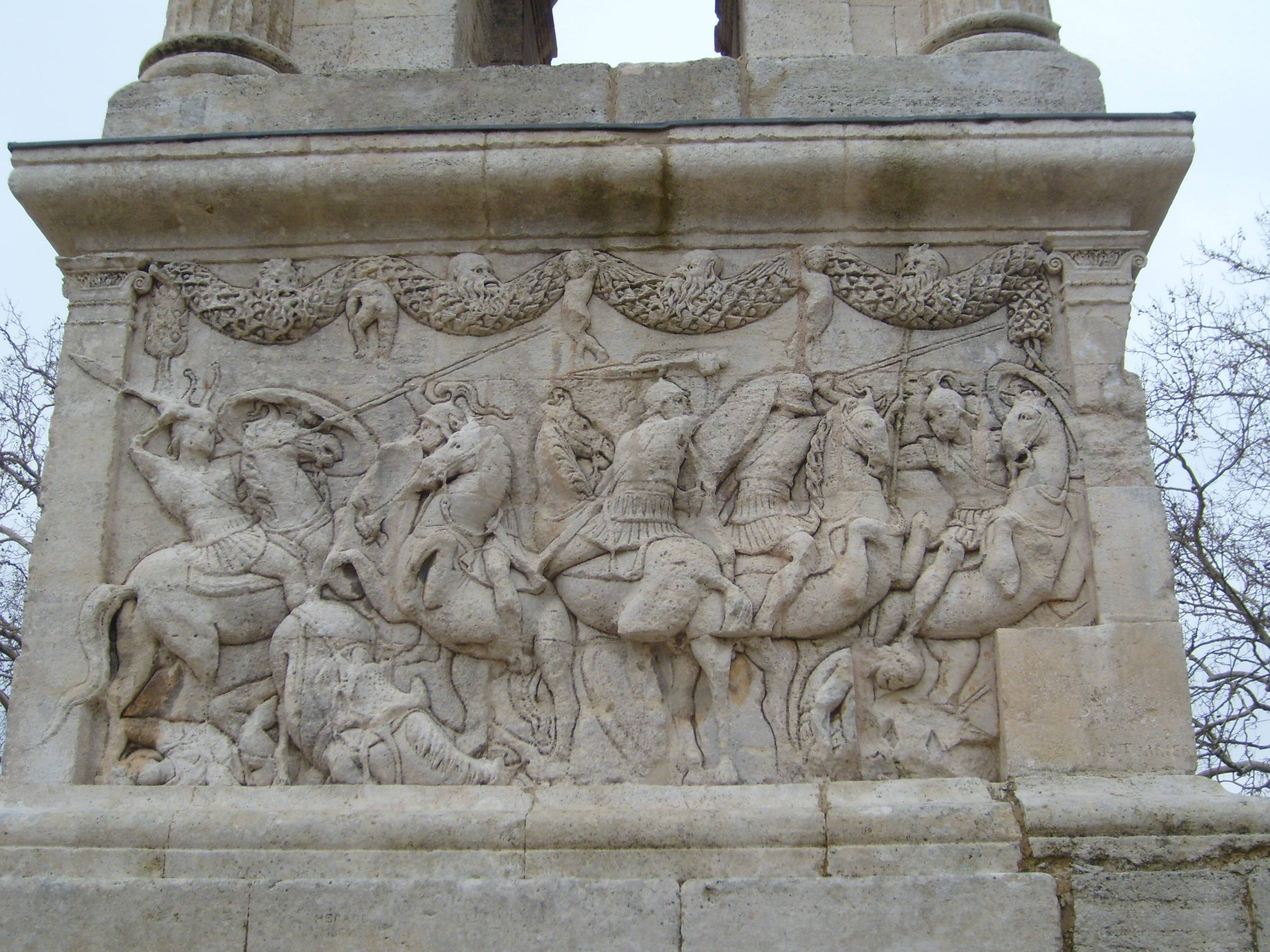 Interesting then how this looked on the Gundestrup cauldron (richly decorated silver vessel, thought to date [… ] or more narrowly between 150 BC and 1 BC): 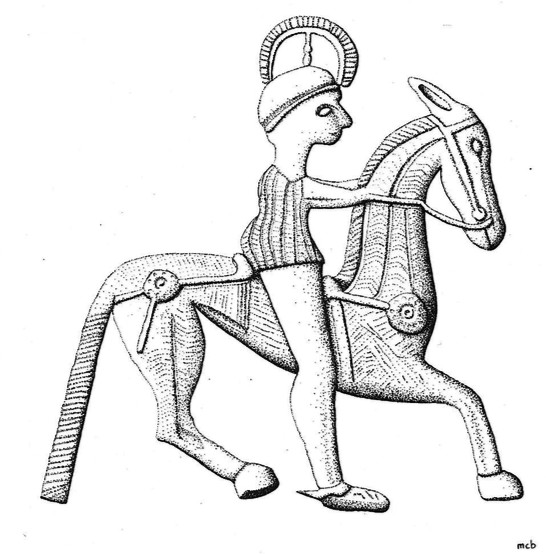 Since I gather that not only strictly military depictions in full armor are requested: 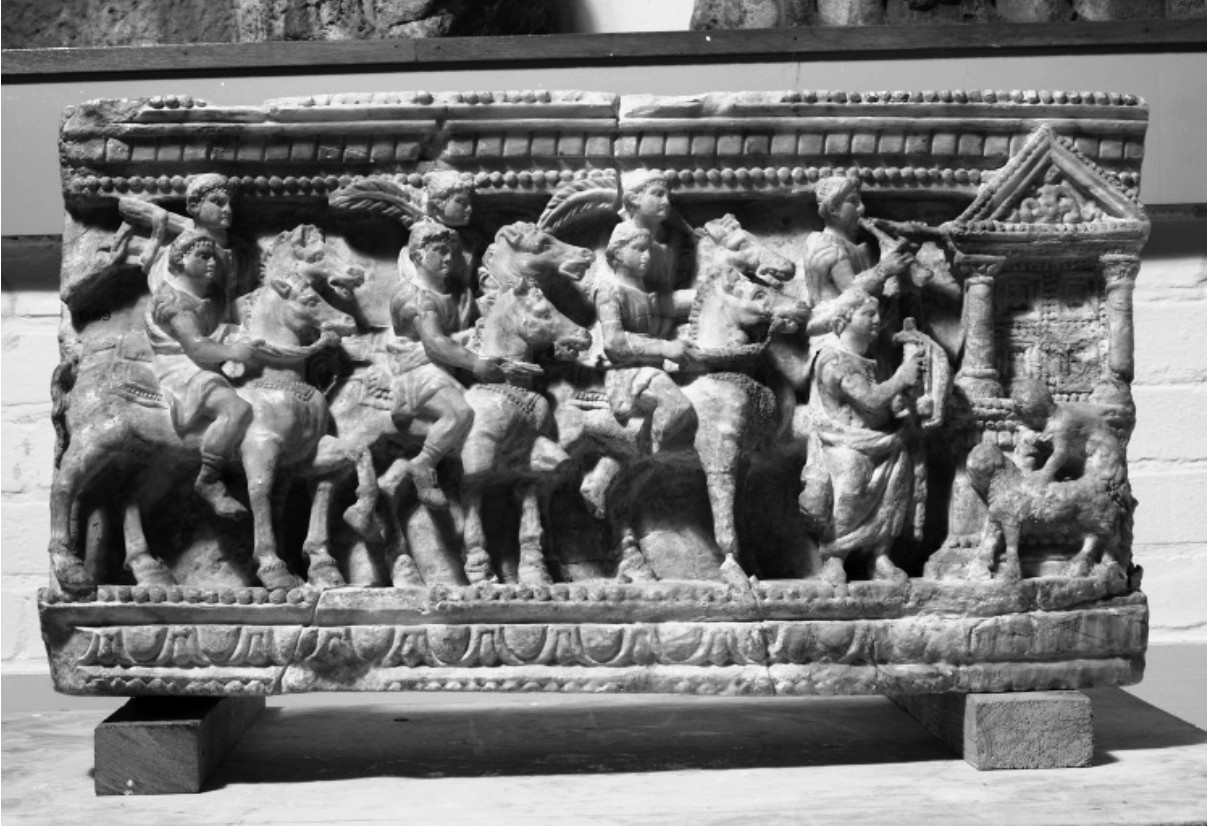 Of specia interest will be the slightly fuzzy dated, but certainly at least touching the timeframe

The "Bronzi Dorati da Cartoceto di Pergola" is the only group of gilded bronzes in the world dating from Ancient Roman times still in existence. They most likely represent a family group, originally two female figures, cloaked and veiled, and two horsemen in high-ranking military garb with richly ornamented horses. 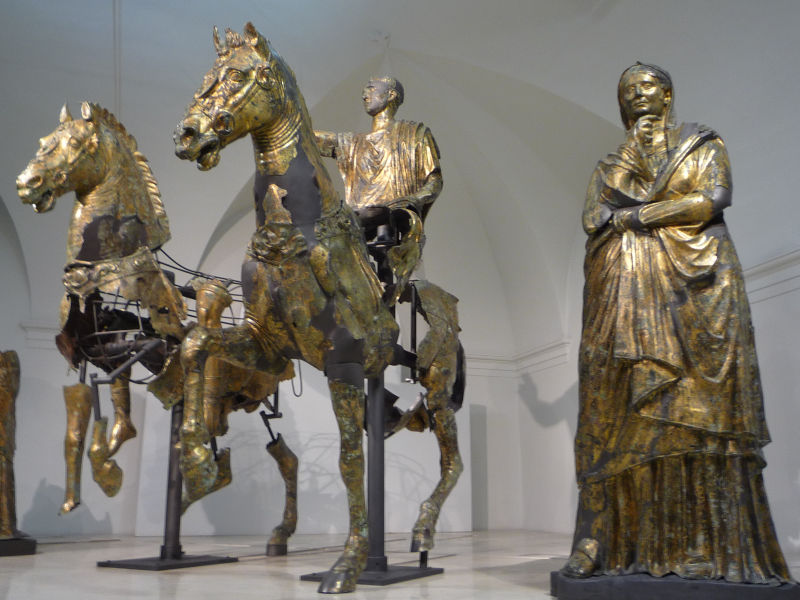 Based on the style, the statues are thought to be from the late Republican age, probably the 1st century BC or 1st century AD. — Museum of Roman Gilded Bronzes. Rare Ancient Roman Life-Size Statues

There are quite a few Roman copies of Greek sculptures, for which the 'originals' have to be dated quite early. Some other sculptures and reliefs are dated with uncertainties, or sometimes just 'confusingly'. For example, the monument tomb of Tiberius Flavius Miccalus is on the web almost always given as 1st century BC, 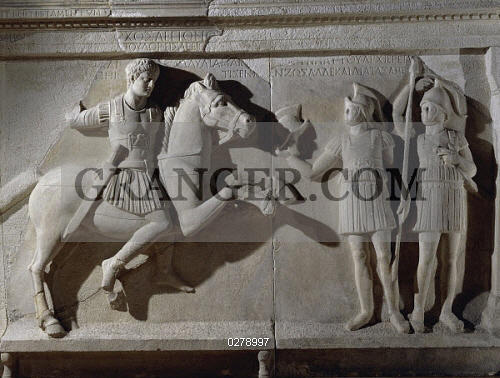 but the supposedly more reliable Arachne database lists it as 1st century AD:

The following was a good faith submission made before OP clarified the question to be about non-numismatic depictions.

A search for "horses" in the British Museum's catalogue of Roman Republican coins quickly turns up this entry of horses prancing from the period 194-190 B.C.: 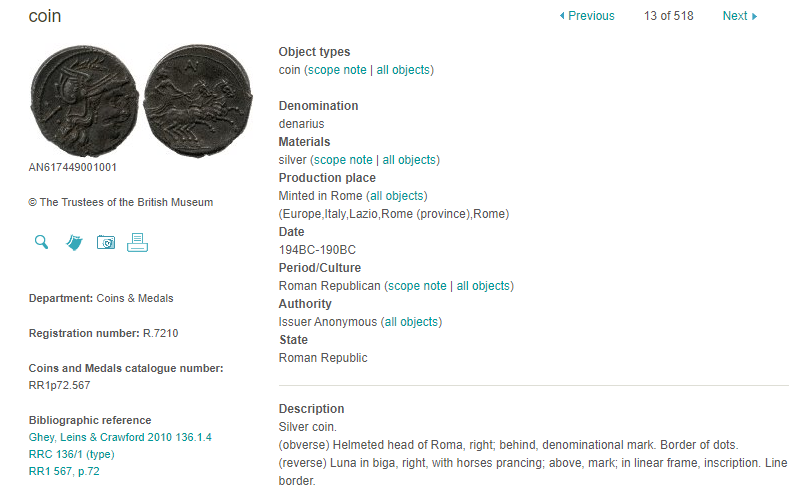 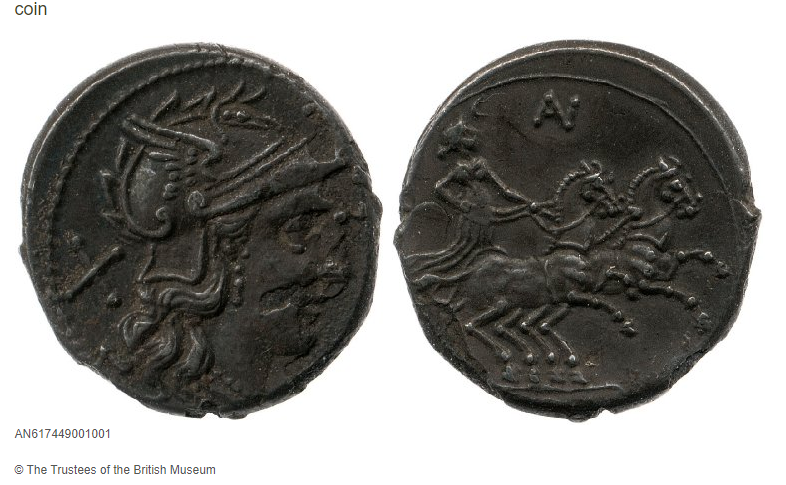 8
Why were there so many suffect consuls during the Principate?
7
Were quaestors in the Roman Republic entitled to lictors/fasces?
7
Is there any evidence that Celts produced chain mail?
3
Internal crisis of the Roman Republic before the Gracchi
6
What Roman institutions were obsolete by the end of the Republic?
17
Which is the earliest surviving inscription of "SPQR"?
7
What is the earliest depiction of a crane?