What are the precursors of the Bayeux Tapestry?

Background from Wikipedia: Bayeux Tapestry is one of a kind, cr. 70 metres long, narrative embroidery depicting the events leading up to the Norman conquest of England, and culminating in the Battle of Hastings. It is probable that it was created in the 1070s. The authorship of the tapestry is disputed; there are reasons to believe it to be either English or French. It is certain however that it represents a unique blend of styles and influences.

According to F. Sidney Walls, "Anglo-Saxon embroideries, which were famous at the time of the Conquest, are a Scandinavian art. … It was a well-established custom among the Teutonic tribes, after their migration from East Asia, to commemorate their exploits by elaborate paintings, sculpture, and embroideries."

I am looking for pre-Bayeux objects with comparable narratives (battles, processions, ...), both art-history and archaeology departments, objects that could have influenced the Bayeux tapestry (preferred) or had similar influences as the Bayeux tapestry.

I cannot find any objects mentioned by F. Sidney Walls, the closes analogy I can think of is Trajan's Column, which was created in 113, almost 1000 years earlier, and Byzantian manuscripts. What are the existing Scandinavian/Teutonic that are similar, those that are mentioned in F. Sidney Walls's paper? I am after the depictions of horsemen, possibly in other art forms, not after general embroideries. 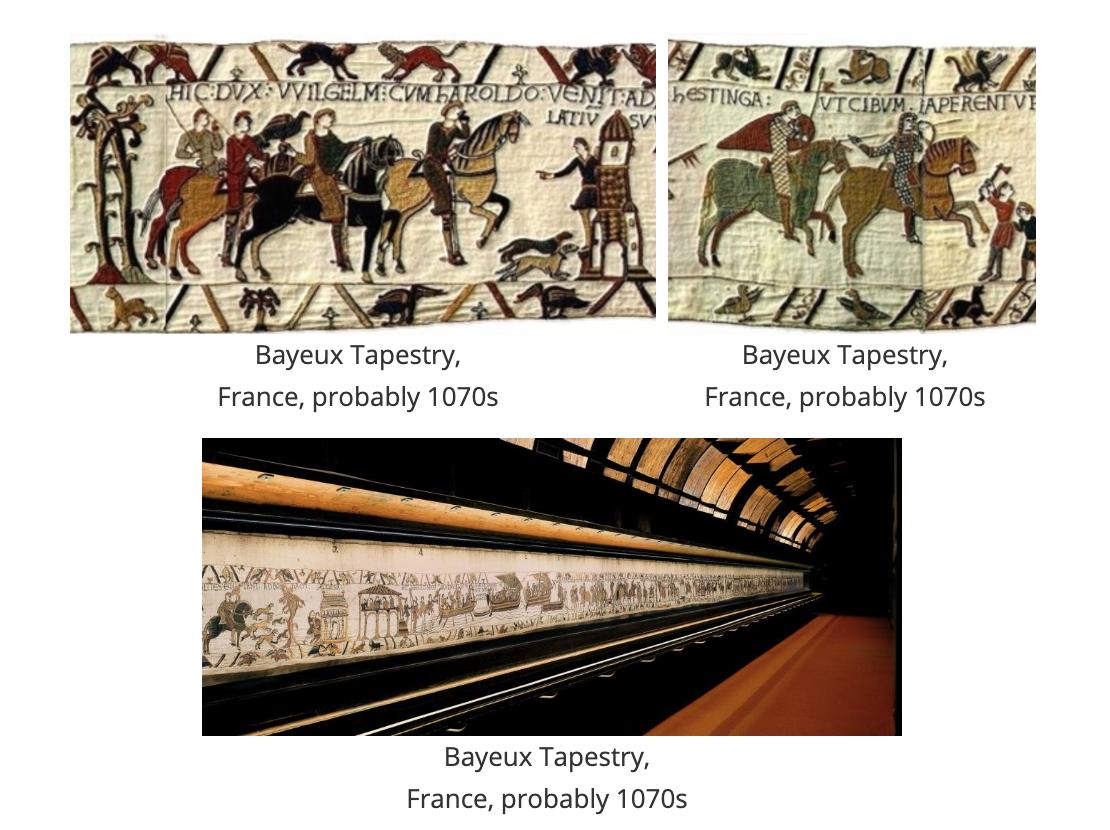 The issue with finding other similar works is that barely any of it survived to this day except as references in documents:

Little physical evidence survives to reconstruct the early development of English embroidery before the Norman Conquest of 1066. Stitches reinforcing the seams of a garment in the Sutton Hoo ship burial may have been intended as decoration, and so be classed as embroidery, and fragments of a scrolling border worked in stem stitch were recovered from a grave in Kempston, Bedfordshire. Some embroidered pieces of about 850 preserved in Maaseik, Belgium, are generally assumed to be Anglo-Saxon work based on their similarity to contemporary manuscript illustrations and sculptures of animals and interlace.

The documentary evidence is rather richer than the physical remains. Part of the reason for both these facts is the taste among the late Anglo-Saxon elite for embroidering using lavish amounts of precious metal thread, especially gold, which both gave items a magnificence and expense worth recording, and meant that they were well worth burning to recover the bullion. Three old vestments, almost certainly Anglo-Saxon, recycled in this way at Canterbury Cathedral in the 1370s, produced over £250 of gold – a huge amount.

The entry on the Bayeux Tapestry has this additional bit:

Tapestry fragments have been found in Scandinavia dating from the ninth century and it is thought that Norman and Anglo-Saxon embroidery developed from this sort of work. Examples are to be found in the grave goods of the Oseberg ship and the Överhogdal tapestries.

A monastic text from Ely, the Liber Eliensis, mentions a woven narrative wall-hanging commemorating the deeds of Byrhtnoth, killed in 991. Wall-hangings were common by the tenth century with English and Norman texts particularly commending the skill of Anglo-Saxon seamstresses. Mural paintings imitating draperies still exist in France and Italy and there are twelfth-century mentions of other wall-hangings in Normandy and France. A poem by Baldric of Dol might even describe the Bayeux Tapestry itself. The Bayeux Tapestry was therefore not unique at the time it was created: rather it is remarkable for being the sole surviving example of medieval narrative needlework. 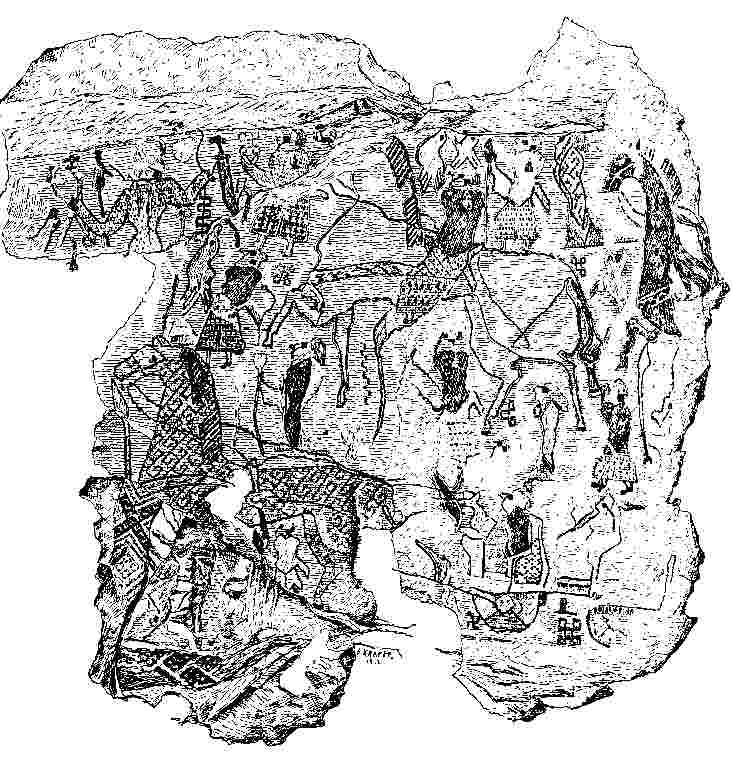 There is a costume from the viking chamber grave from Mammen with a dendrochronology date of 970/971.

Not the answer you're looking for? Browse other questions tagged middle-ages art early-medieval norman anglo-saxons or ask your own question.

12
What right/legitimacy did Normans have to a kingdom in Southern Italy?
29
What is the meaning of people "looking elsewhere" on medieval paintings?
2
What do we know about the character of William Adelin, son of Henry I?
18
What is the meaning of a glove on the tail of monsters in illuminated manuscripts?
11
Did Edward the Confessor choose Harold Godwinson as his successor?
14
What are the tabs/spaces for in the Beowulf text
10
What are the red and white sectors of The Tower of Babel (Rotterdam)?
23
Are there historical texts in England querying where Roman structures came from?