Without the rigid etiquette, she realised, Prince Gong was too relaxed with her and was treating her in the patronising way he tended to treat all women, especially as she was young–still in her twenties. His behaviour irritated and angered her for some time, until one day in 1865 she exploded and in tremendous agitation fired him. She wrote a decree by hand, accusing him of ‘having too high an opinion of himself’, ‘strutting about and giving himself airs’ and, simply, being ‘full of rubbish’. This was one of the few decrees Cixi wrote in her own hand. Her writing was still poor, and her text was littered with solecisms.

In her typical style, Zhang Rong offers no references. I am certainly no good judge of literary Chinese, let alone the variant used in edicts. Yet I have seen many claims pro and contra Cixi‘s supposed lack of education. I would like to have access to the text, so as to be able to ask Chinese Professors about it.

So, how to get the text of this edict?

This is the handwritten decree that it was referring to (relevant content boxed in red): 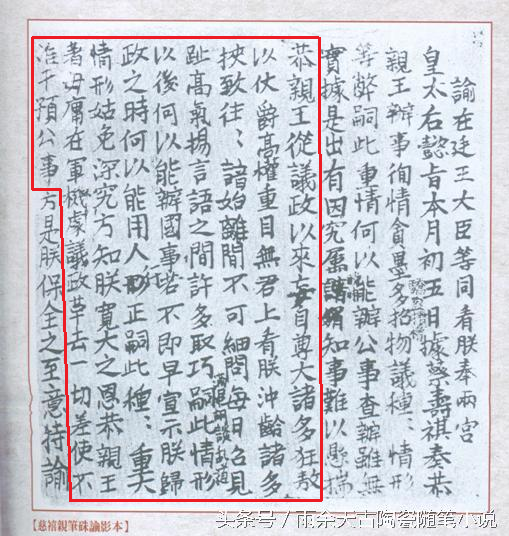 Text (with corrections; courtesy of https://kknews.cc/history/epbl22y.html)

Not the answer you're looking for? Browse other questions tagged sources medieval-china qing-dynasty or ask your own question.

3
How do we know that this decree was written by Cixi?

11
Why didn't Emperor Gaozu of Tang let Crown Prince Li Jiancheng command battles more often?
6
Where can I get information used to make Soviet economic plans?
5
Where did the names of these Tyrian kings come from?
6
Where does the phrase "behind the wind" come from?
2
Where are official images and metadata of cave paintings housed?
3
Where can I find this paper by Jean Buridan?
1
Why where individual servings replaced with shared dishes during the Song dynasty?
4
Where can I find the original Arabic version of bin Laden's 1996 fatwa?