Can anyone identify this possibly Czechoslovak uniform?

I have this photo of my Great Grandfather Antonin Hošek and his wife Elisabeth Hofrichter with my Grandma as a baby Alzběta Hošková. I am trying to find out more about my family's past and I'd love to know if anyone can identify this uniform? Where from? What is the rank? etc. It is most likely to be Czechoslovakian around 1926. 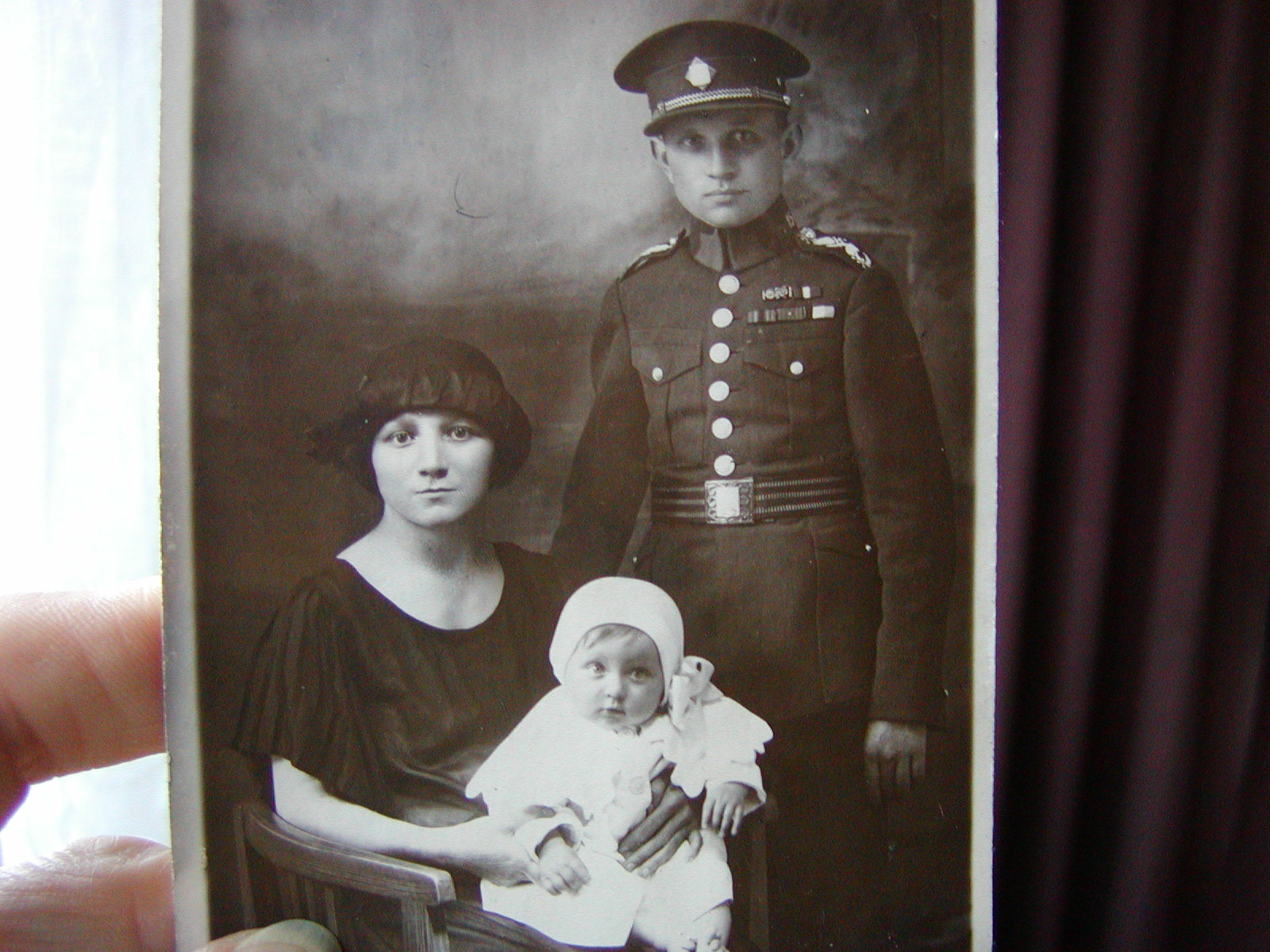 I also have a knife and sheath from him. New photos attached. 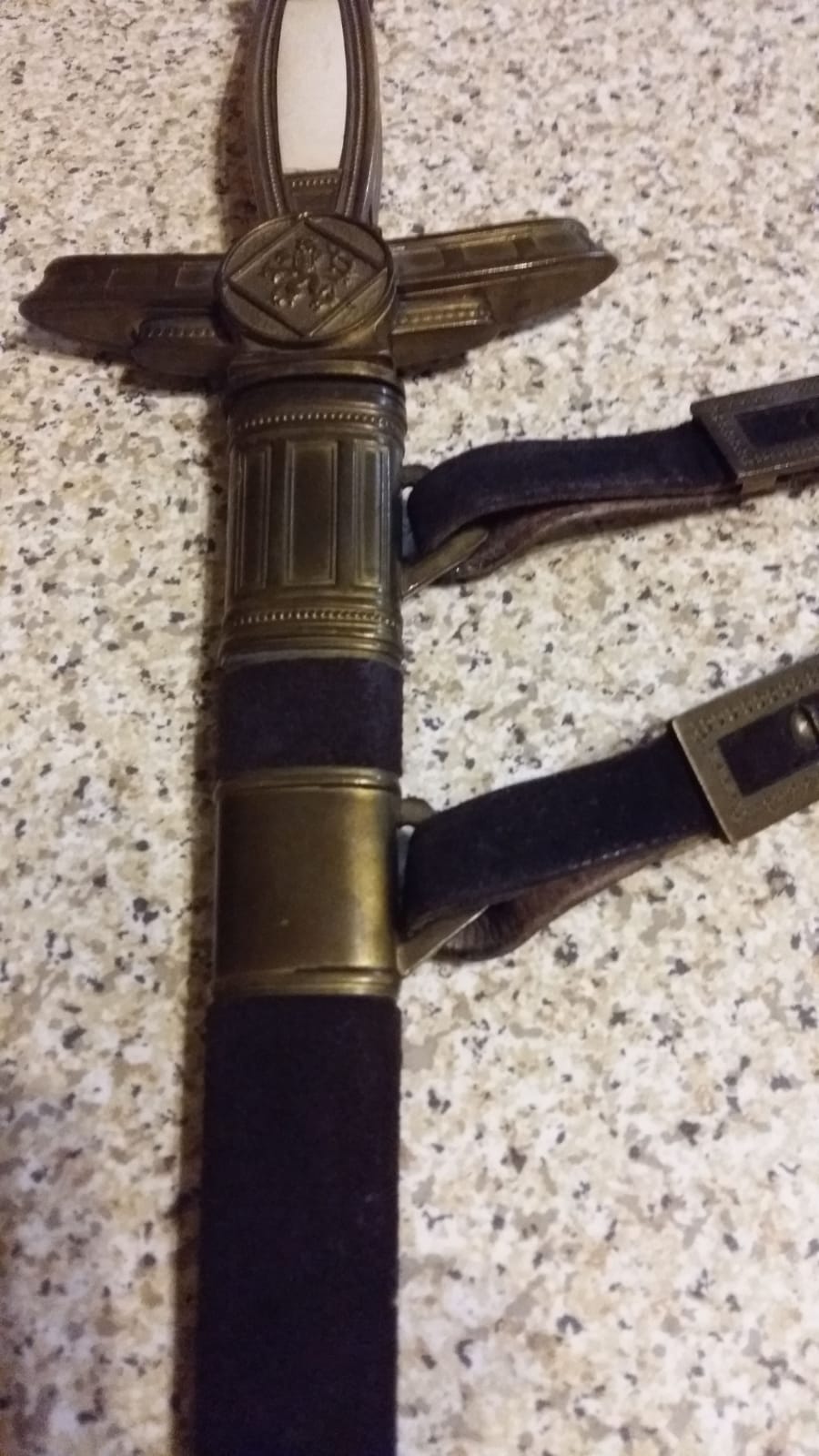 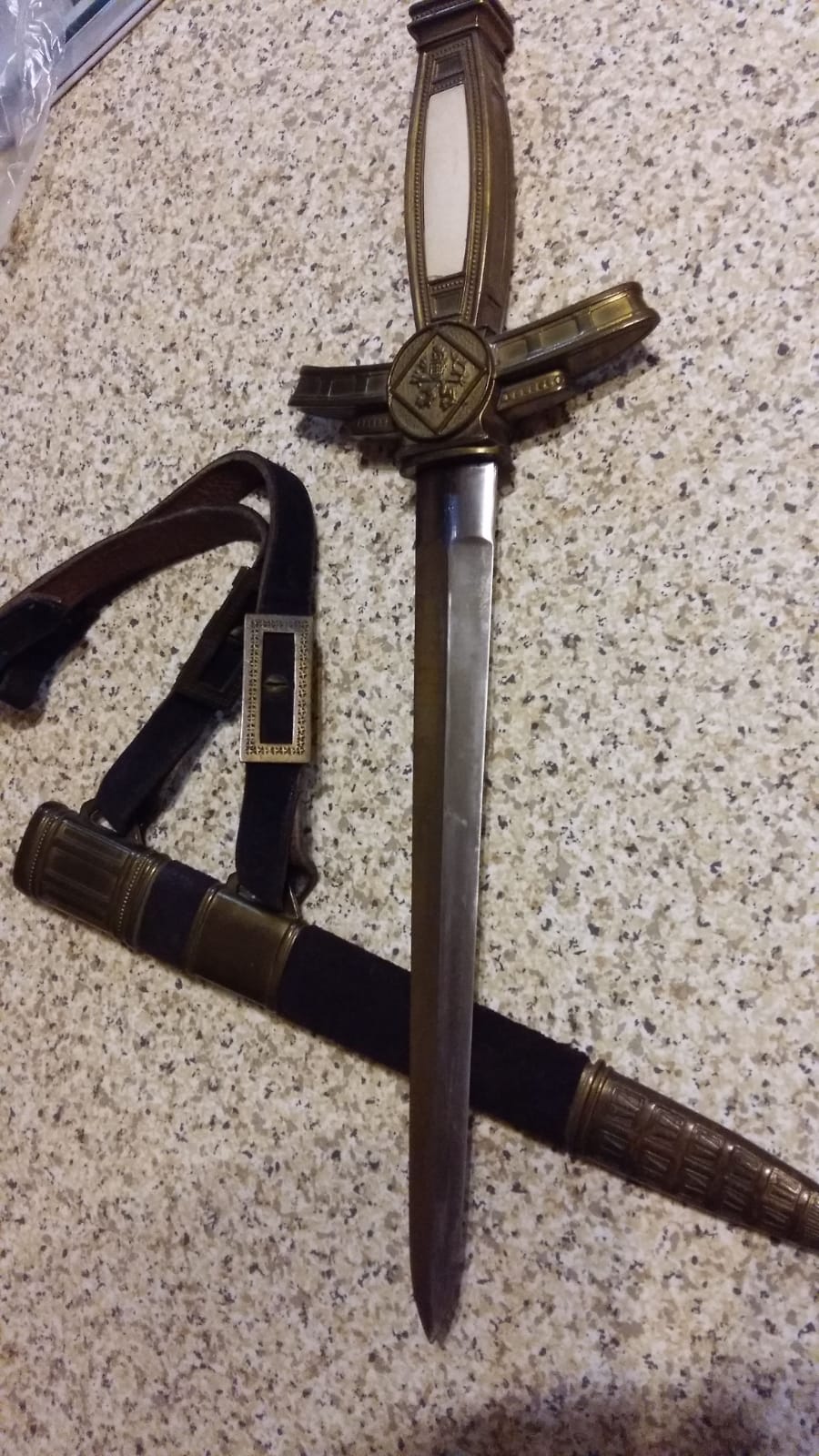 I also have a certificate - can anyone transcribe it for me, please? 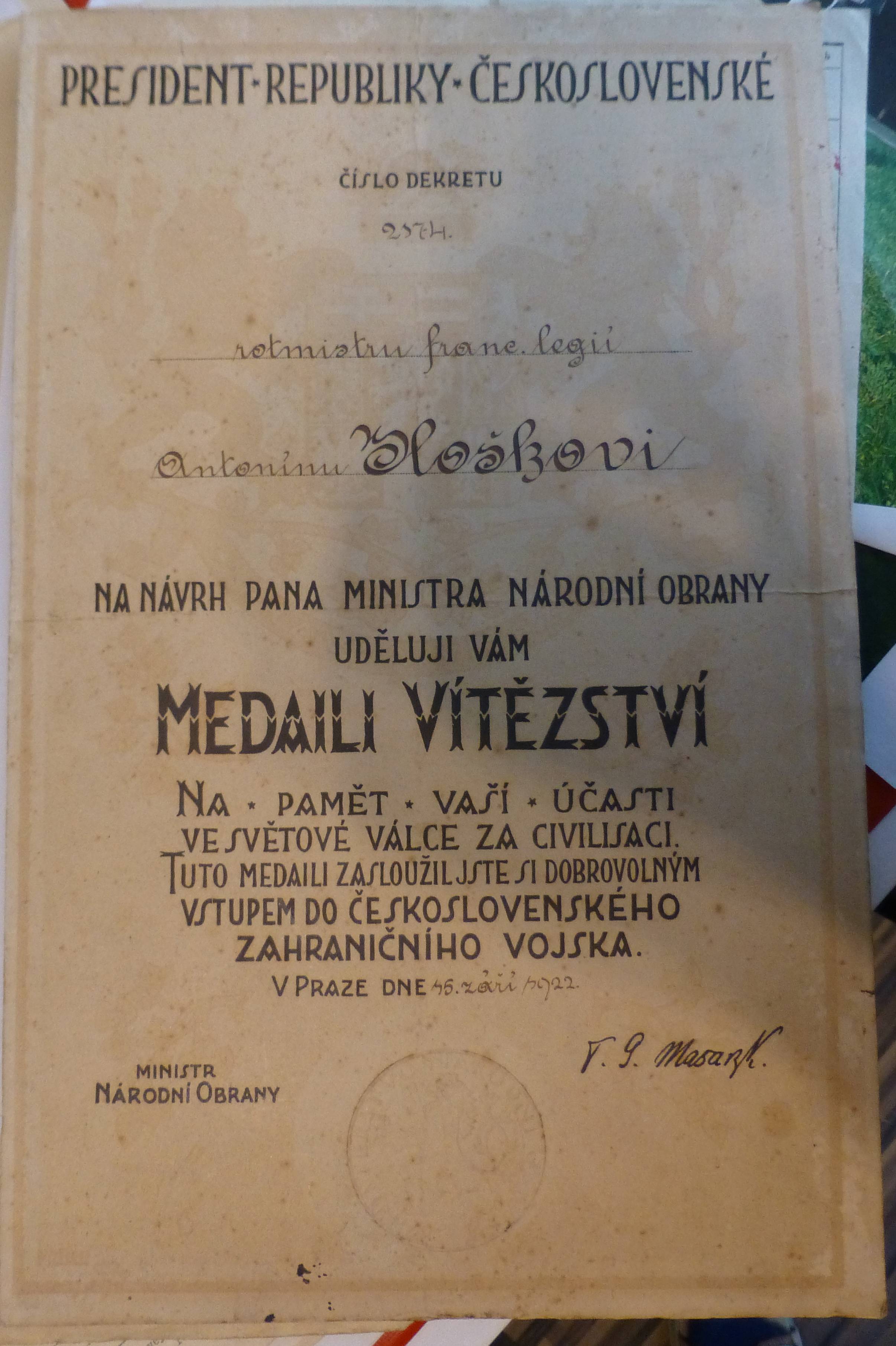 This summarizes my since-deleted comments into a slightly more coherent form. It is only a partial answer to the originally posed question, and relies on the photographs the OP added after their original post. The uniform is Czech; the bearer was at some point an NCO.

The cap badge has the overall shape of a tilted square containing a smaller square region, as does the badge of the Czechoslovak army, as illustrated on the cited wikipedia article. The image on the knife hilt matches this badge: this is indeed a Czech uniform & gear.

The diploma, or certificate, is the award of a "Victory Medal", as illustrated on various vendors' and collectors' pages (such as this, which has an explanatory essay) and history blogs, for example, this one. This last item transcribes and explains some of the text on a similar certificate. At the end of World War I all allied veterans were given a Victory Medal by their governments. The case of Czechoslovakia was different, because there was no such country during the war, even though many of its future citizens fought on the allied side in what was called the Czechoslovak Legion, whose name predates the creation of the Czechoslovak Republic. After the Republic was founded a Czech version of the victory medal was created, and apparently awarded to your great grandfather. At that time he was presumably in the Czech army, as evidenced by the uniform and repetition of the badge on the hilt of the knife.

One of the web sites above translates another person's diploma reading

President of the republic of Czechoslovakia Number of decret

To rememberance of your part in world’s war for civilisation. This medal was vindicated by your volunteer entry into Czechoslovak foreign corps.

The handwritten bits of your diploma are the certificate number "2574", what I read as "rotmistru franc legii", the name "Antoninu Hoszovi" (in what I suppose is an inflected form of your grandfather's name: I do not know Czech), and at the bottom the date "15 zari 1922", (that is, 15 Sept 1922) and the president's signature "T. G. Masaryk".

Another site mentioned above explains "war for civilization" means the Great War, which we now call "World War I". The only problematic item is the line with rank and service. There was a French branch of the Czechoslovak Legion, analogous to the Russian branch mentioned on the other certificate. So "franc legii" is understandable. The rank seems to say "rotmistru" which seems to be an inflected form of a word for sergeant major, a kind of senior NCO. (The word itself is probably derived from German Rittmeister, meaning cavalry captain.) It's not clear to me if that refers to his war-time rank or to his 1922 rank.

The web page gives rank insignia for ceremonial uniforms in the period 1925-1929. A rotmistr's epaulette had a row of plants snaking its length, and a single round "pip" at the end farthest from the button by the neck. What I see in the portrait photo is what looks like a twisted braid running the length of the epaulette ending with a single pip of indistinct shape. This is consistent with rotmistr, but if the pip is actually a narrow rectangular bar or a rotated square, the rank changes.

Not the answer you're looking for? Browse other questions tagged military identification weapons uniform czechoslovakia or ask your own question.