How "successful" were WWII pigeon-guided missiles?

In World War II, a prototype missile guidance system was developed in Project Pigeon, whereby a pigeon's pecks (or pecks by multiple pigeons) would be used to guide a missile.

Test runs were successful; the pigeons pecked reliably, holding the missiles on course even when falling at a rapid pace, undaunted by the terrifying noise of war.
Pigeon-guided missiles, Military History Matters

It seems that any confidentiality would have since lapsed, so perhaps there is documentation available.

In particular, I'd be interested in seeing e.g. experimental notes, a lab report, a scientific paper, or some other form of write-up of the experiments: what was tested, how it was tested, and numbers which measure how successful it was. However, I don't know what's available, nor how I would access it. These experiments were conducted by a famous US psychologist B. F. Skinner, so it seems reasonable to expect these experiments were documented.

In a 1960 article Pigeons in a Pelican, B. F. Skinner gave an account of his experiments, the problems he encountered and how they were overcome. The details are too lengthy to cite in full here, but his final demonstration (1944) before the project was rejected shows that - on an experimental level in a laboratory - the system showed promise. A later experiment (after the project was revived in 1948) had a 55.3% success rate with "simulated missile-flight speeds of about 400 miles per hour".

Writing on the 1944 demonstration to "a committee of the country's top scientists", Skinner observed that:

The basic difficulty, of course, lay in convincing a dozen distinguished physical scientists that the behavior of a pigeon could be adequately controlled. We had hoped to score on this point by bringing with us a demonstration. A small black box had a round translucent window in one end. A slide projector placed some distance away threw on the window an image of the New Jersey target. In the box, of course, was a pigeon — which, incidentally, had at that time been harnessed for 35 hours. Our intention was to let each member of the committee observe the response to the target by looking down a small tube;

However, the committee of scientists were pressed for time so

we were asked to take the top off the box. The translucent screen was flooded with so much light that the target was barely visible, and the peering scientists offered conditions much more unfamiliar and threatening than those likely to be encountered in a missile. In spite of this the pigeon behaved perfectly, pecking steadily and energetically at the image of the target as it moved about on the plate. One scientist with an experimental turn of mind intercepted the beam from the projector. The pigeon stopped instantly. When the image again appeared, pecking began within a fraction of a second and continued at a steady rate.

trained pigeons to follow a variety of land and sea targets, to neglect large patches intended to represent clouds or flak, to concentrate on one target while another was in view, and so on. We found that a pigeon could hold the missile on a particular street intersection in an aerial map of a city. The map which came most easily to hand was of a city which, in the interests of international relations, need not be identified. Through appropriate schedules of reinforcement it was possible to maintain longer uninterrupted runs than could conceivably be required by a missile. 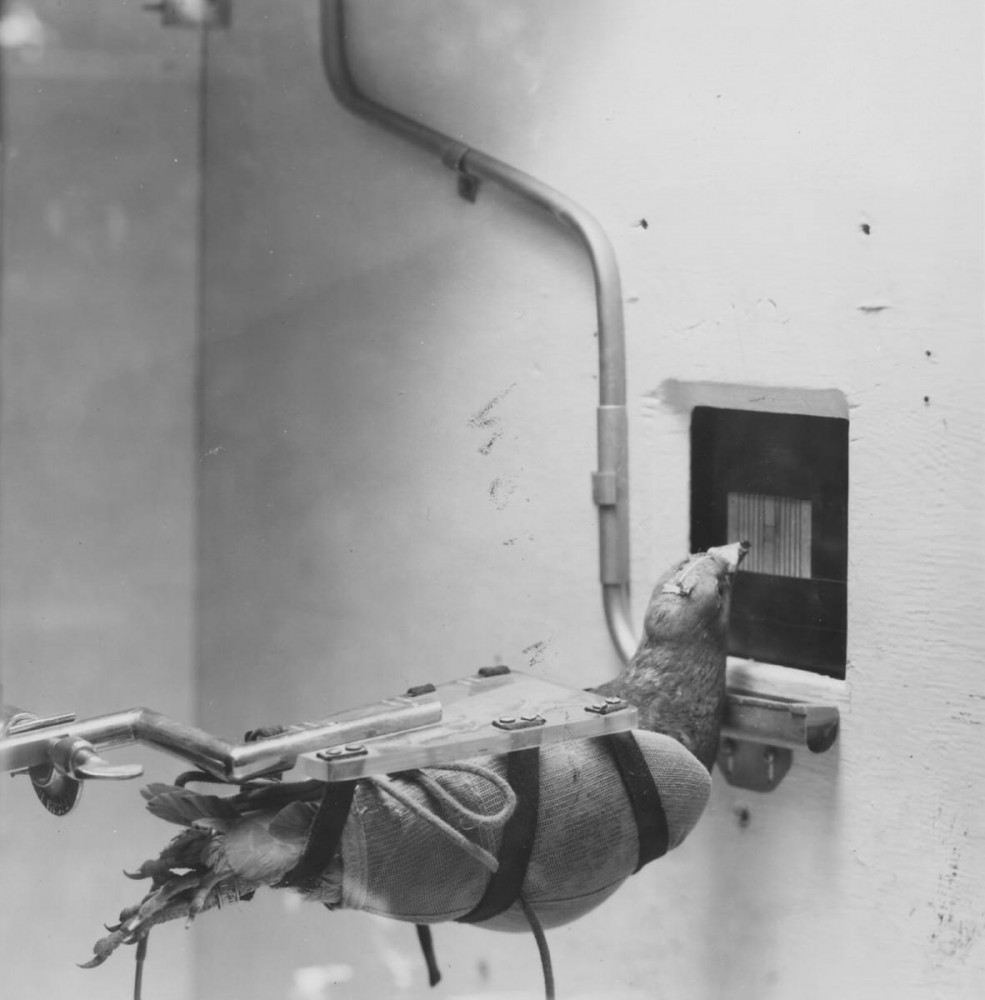 Source: manifestajournal.org. The image is copyright bfskinner.org (more images at this link). The image shows an "arrangement for studying pursuit movements."

Despite this successful demonstration, why was it not pursued? Skinner noted that:

It was a perfect performance, but it had just the wrong effect. One can talk about phase lag in pursuit behavior and discuss mathematical predictions of hunting without reflecting too closely upon what is inside the black box. But the spectacle of a living pigeon carrying out its assignment, no matter how beautifully, simply reminded the committee of how utterly fantastic our proposal was. I will not say that the meeting was marked by unrestrained merriment, for the merriment was restrained. But it was there, and it was obvious that our case was lost.

The official word on the rejection was:

"Further prosecution of this project would seriously delay others which in the minds of the Division would have more immediate promise of combat application."

Doubts also existed because of the perceived slow progress and budget overruns; the project was still at the laboratory stage. Prior to the above demonstration, chief technical officer of Division 5 of the Office of Scientific Research and Development (OSRD), Hugh Spencer had stated that

the results were "not of sufficient promise to justify my asking him to go any farther or giving him any expectation of further support from NDRC."

The above demonstration was one of several, and used a single pigeon. In fact, Skinner was by this time using three birds to improve reliability (the idea being that if one bird 'malfunctioned', it would be overruled by the other two). This involved a simulator for the Pelican (the missile which the US government wanted guided). It was

a wing steered glider, still under development and not yet successfully steered by any homing device. 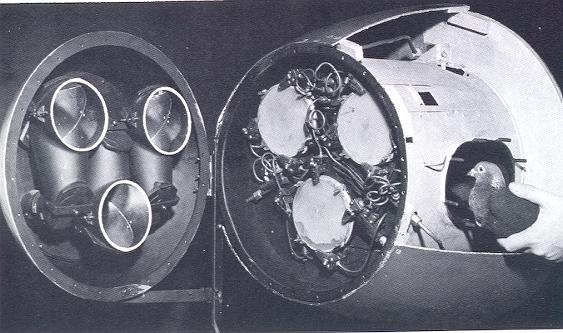 The simulator for the Pelican missile,

tilted and turned from side to side. When the three-bird nose was attached to it, the pigeons could be put in full control—the "loop could be closed"—and the adequacy of the signal tested under pursuit conditions. Targets were moved back and forth across the far wall of a room at prescribed speeds and in given patterns of oscillation, and the tracking response of the whole unit was studied quantitatively. 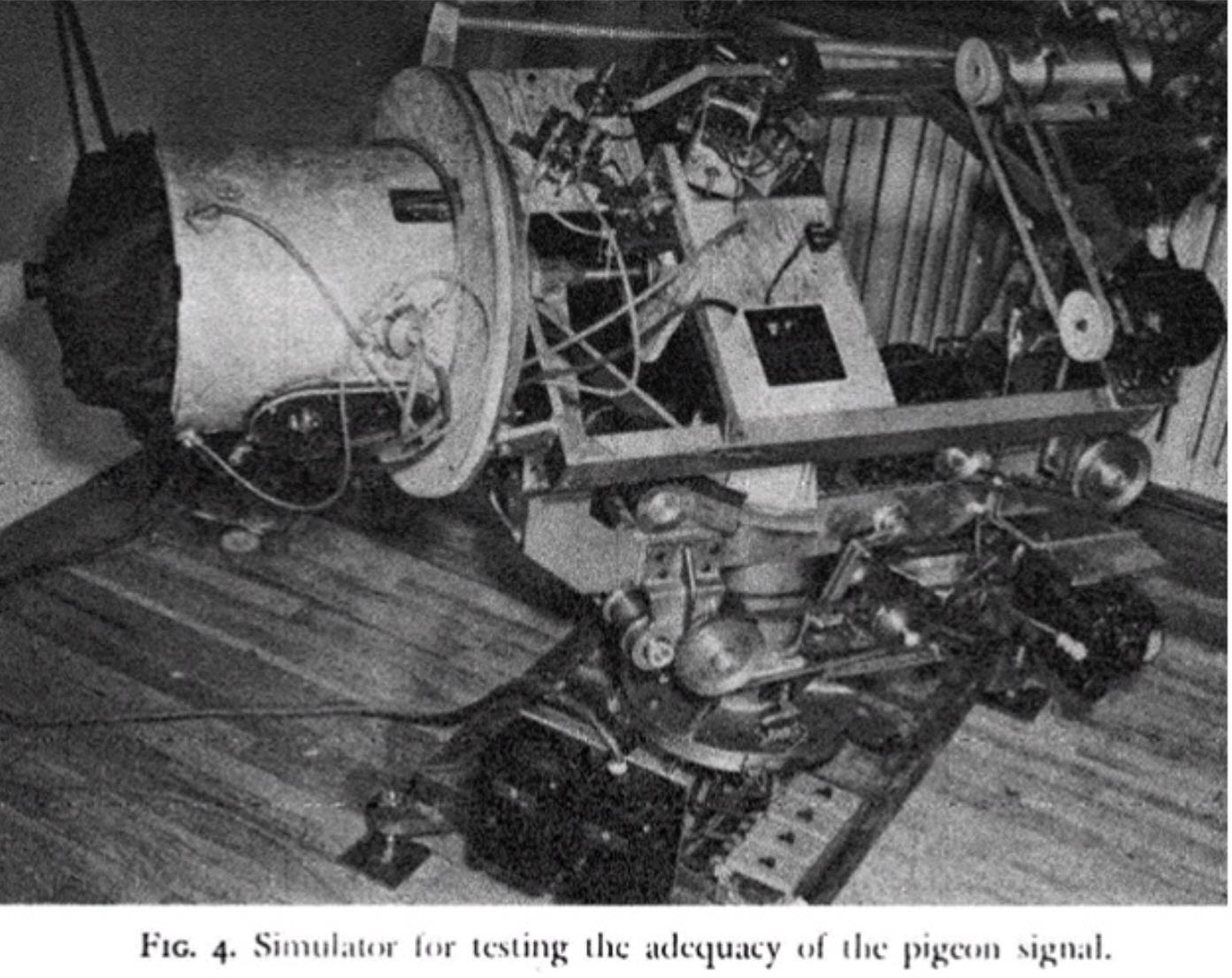 "Simulator for testing the adequacy of the pigeon signal". Source: B. F. Skinner, 'Cumulative record; a selection of papers' (1972)

There are also a few videos which contain clips of, among other things, the pigeons 'in action'. See, for example, rocketryforum's Project Pigeon (later ORCON).

After WWII, in 1948, the pigeon project was revived:

In simulated rocket tests, the pigeons produced "surprisingly good results." The researchers were convinced that a pigeon could successfully guide a speeding missile under optimum conditions, compensating for his own and the missile's errors...

...The control circuits were such that if the pigeon stopped tracking, the target image would drift rapidly away from the center of the screen. This forced the pigeon to correct not only his own pecking errors, but those introduced by the yawing of the missile. It turned out that 55.3 per cent of the runs made were successful... 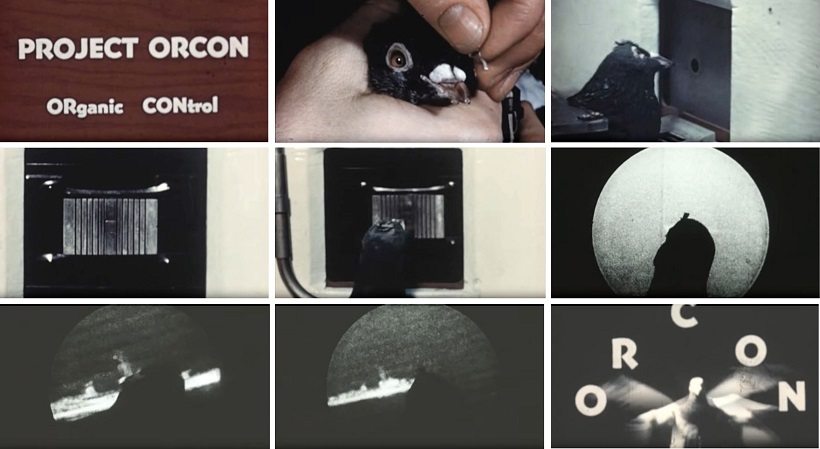 However, in 1953 the project was again abandoned as, by then, "the reliability of electronic guidance systems was proven."

Skinner's work was pretty good, but in his analysis on why it was discarded he might be ignoring several factors outside of his area of expertise.

First of all - while in his " Pigeons in Pelican" article Skinner states that no other guidance system existed for the bomb, in fact, Pelican already had two of them - televised and semi-active radar homing; tests began in December of 1942. Those systems were not quite combat-ready, though, which might've be the reason for Skinner's statement: radar guidance system required a particular aircraft to be used (Lockheed PV-1 Ventura - a patrol version of B-34 Lexington, which swapped some of the forward armament for a nose-mounted ASD-1 search radar), which was both in (relatively) short supply and would've its range reduced by the weight of the bomb (which, according to admiral evaluating the program, made it unfit for Pacific theater); and television guidance wasn't very accurate. It was due to those two years of testing that the Pelican program was cancelled on September 18, 1944, and in turn, in October Project Pigeon was cancelled too.

Second - same article states the ORCON experiments have shown the accuracy of pigeon-based system at 55.3%. Impressive? Not necessarily. The tests were a series - first group was a test for being able to track an image of distant ship for a prolonged time (that's where the figure of 55,3% successes comes from - it was an aggregate of several "high-performer" birds with success rate of over 80%, which gave hope for improving results of the system by selecting "better" birds during training); second test was tracking the enlarged version of same picture (testing for pigeons being able to still recognise the target while approaching closer - 60% aggregate result, again with same birds performing better than the others; but with a caveat that behavior of the bird might be different with actual animated image and additional testing would be needed); but the third test was the most important for the military - in it the birds were presented with a variety of targets in different aspects and on different background. Interestingly, pigeons did not care much for changes in targets or backgrounds (i.e. there was no difference in results between same-aspect pictures of a destroyer and a freighter), but changes in aspect seemed to stump the birds. Results of the last series were much worse - average result of 31% successes, with top performers reaching 40%. We can compare that to SARH guidance - previous to Pelican's cancellation, its electronically guided variant was actually tested against a training target. 2 out of 4 dropped Pelicans hit the target - pretty much the same result; and by 1948 electronic systems were improved.

Third - ORCON experiments of 1948 data shows that the simulated speed the system was tested for is 400 mph. That's not a lot, even for 1944 - the Gorgon missile family, which was in development since 1943, was slated to have speeds upwards of 500 mph. Later (1947) versions of those missiles could reach 600 mph, and the missiles under development in 1948 would again be faster. I couldn't find why exactly 400 mph speed was chosen - but it wasn't a good choice. Moreover, the original WW2 program included acceleration tests using a centrifuge, but ORCON program makes no mention of such testing - and powered missiles available by that time (Pelican was an unpowered glide bomb) could've negatively affected the living guidance system.

To sum up - while Project Pigeon might have been unfairly (due to lack of full evaluation) deemed "crackpot" in 1944 by biased physicists, it isn't very clear that it was actually better than radar guidance in 1944. Its inability to be jammed was a plus; the ability to be "trained" to hit targets other than ships a gigantic plus (radar-homing weapons of the time were easily confused by ground radar clutter, as was shown by application of such bombs against ground targets in 1945) - but pigeons having difficulties with recognising the target in different aspects would be a big problem for practical application; moreover, SARH system was already undergoing testing for quite some time while Project Pigeon was still under evaluation.

Not the answer you're looking for? Browse other questions tagged world-war-two military weapons animals or ask your own question.

33
How beneficial were war bonds to the US during WWII
5
How was Munich Captured in WWII?
20
At the end of WWII, were Nazis working on any other super weapon besides V-2?
13
How successful were Einsatzkommando Tunis and how much was Rommel complicit?
10
How common were horses at the beginning of the 20th century?
2
How many ministerial deferments were there during WWII for the United States?
11
Were railway guns ever critical in any battle during WWI and WWII?
3
Were any tactical missiles used during the 1971 Indo Pakistan war?
2
How were ship kills accounted in WWII?
0
In WWII, how were all pilots/soldiers able to identify enemy vehicles?