Is it true that Adolf Hitler foresaw a surrender on the Western front in the last week of April 1945? [closed]

David Irving's controversial book Hitler's War seems to imply that after his nervous breakdown during the battle of Berlin, Hitler realized that defeat was imminent and decided that surrendering in the West to save what was left of Germany from the Soviets was the right way to go about things.

Certain memoirs as well as the last chapter of Kershaw's book Hitler also seem to hint at him wanting someone else to negotiate a surrender with the USA after his death - possibly Goering at first, but after his expulsion the job fell on Doenitz. If that's true, it would also explain Doenitz's attempts to make a separate peace on the West as his first (albeit woefully short-lived) initiative in May.

On the other hand, Hitler was livid at hearing that Himmler had attempted to make peace with the Allies as late as the end of April, by when it should have been obvious that now was the time to surrender to avoid further bloodshed.

Is it possible to reconcile these possibilities?

Ignoring Irving, there are other sources to the effect that Hitler realised somebody would have to carry out the end of the war on the German side. He seems to have wanted to avoid capture by the Soviets, and to avoid seeing the defeat of his ideas, hence his suicide and orders to burn his body. But that does not mean he didn't want to control events.

His repudiation of Himmler's negotiations seems to have been because Himmler was not authorised to negotiate, which would have made him suspicious that Himmler was trying to profit from them. Any such suspicion was correct: Himmler's negotiating position was that the SS and police forces he commanded were the only way to keep order in Germany, so the Allies needed his help. Given the Allies' attitude to the SS, this was never going anywhere.

As for Doenitz's negotiations, ever since the war had turned against Germany, German leaders had been hoping for a separate peace with the Western Allies and an alliance against the Soviets. Stalin had regarded that as a threat since the start of Operation Barbarossa and the Declaration by United Nations of 1st January 1942 had specifically ruled it out. By early 1945, it was clear that the West and the USSR were going to have a difficult relationship after the war, and there was some maneuvering for positions during the war, but they were agreed that stamping out Nazism and remaking Germany came first. Unconditional surrender was the only option on offer.

Question:
Is it possible to reconcile these possibilities?

David Irving is a poor source of information.

Irving's reputation as a historian was discredited[Note 2] when, in the course of an unsuccessful libel case he filed against the American historian Deborah Lipstadt and Penguin Books, he was shown to have deliberately misrepresented historical evidence to promote Holocaust denial.[Note 3] The English court found that Irving was an active Holocaust denier, antisemite and racist,5 who "for his own ideological reasons persistently and deliberately misrepresented and manipulated historical evidence".5 In addition, the court found that Irving's books had distorted the history of Hitler's role in the Holocaust to depict Hitler in a favourable light.

It's important to note here that Hitler never negotiated peace for the sake of peace. Hitler negotiated Five peace treaties, and broke four of them within the first year (Britain, Czechoslovakia, France and Soviet Union). Poland was the outlier, it took him a few years to break that treaty.

Early in his rearmament program Hitler would use diplomacy and promises of peace to distract his potential enemies. Later Hitler used diplomacy to achieve what Napoleon achieved with maneuverability, defeating his enemies in detail. To divide and conquer. Rather than fight 2,3,4 countries; Hitler would try to negotiate separate peace treaties with some in order to free his hand to strike the isolated. Of coarse he always did return to isolate and strike those who had appeased him.

Hitler was constantly offering separate peace deals to weaken the alliance against him. While this was effective early on, he had betrayed most of the folks at the table by mid 1941; thus his overtures after that were not given merit. They were recognized for what they were, what they always were.

Reichsführer Himmler Pitches Washington
20 March 1944, Gen. William J. Donovan, director of the Office of Strategic Services (OSS), passed on to President Franklin Delano Roosevelt a memorandum written by Abram Hewitt, OSS officer in Stockholm under cover of the United States Commercial Company. … It concerned a secret proposal proffered by Nazi Reichsführer SS Heinrich Himmler, and iterated by Schellenberg and Kersten, for ousting Hitler and negotiating peace with the Western Allies as a first step in fighting a one-front, one-enemy war with the Soviet Union—with or without help from the United States and Britain.

Detailed Answer:
Hitler was pretty consistent in WWII. He paired offensive actions with offers of peace. This was done to divide, paralyze, or isolate Europe's countries which could oppose him. It was effective early on. But ultimately as Hitler betrayed his pledges (with Czechoslovakia, Poland, France, UK, and Soviet Union) of peace which were purchased at significant cost by his would be appeasers, there was just nobody left which Hitler had not betrayed. It was clear to everybody what Hitler was doing by mid 1941 when he invaded the Soviet Union. This did not stop Hitler from continually seeking separate peace deals throughout the war, he just had no success at it.

Stopping Hitler's ability to divide the allies was actually one of the major wartime strategies of the allies, constantly discussed at big three meetings. All the allies were paranoid they would be the victim's of a separate peace. All the allies conducted these secret talks at different times during the war. Right up until the end, Hitler was still fantasizing of separate peace agreement, which would allow him to split the allies, recover his strength, and ultimately win the war.

The allies for their part pledged several times since 1941, not to agree to a separate peace and hold out for Hitler's defeat and full surrender.

Will We Ever Know Why Nazi Leader Rudolf Hess Flew to Scotland in the Middle of World War II?
Hess hoped to make contact with one of the highly placed British figures who, unlike Churchill, were willing to make peace with the Nazis on Hitler's terms. Hess believed that Hamilton headed a faction of such people and immediately asked his captors to be taken to him. But Hess was misinformed. Hamilton, who wasn't home that night but on duty commanding an RAF air base, was committed to his country and to its fight against Germany.

New World Order(Nazism)
Late in the war, after the failure of the final Ardennes offensive and the Allied crossing of the Rhine into Germany itself, Hitler hoped that a decisive victory on the Eastern Front might still preserve the Nazi regime, resulting in Operation Spring Awakening. He believed that, with the conclusion of a separate peace-treaty with the Soviet Union, a division of Poland might still be realized and leave Hungary and Croatia (the former still under German occupation at the time, the latter a Croatian fascist puppet-state) under German control.[134] Hitler only acknowledged Germany's imminent defeat mere days prior to his suicide.

Hitler's Final Days
U.S. President Franklin Delano Roosevelt had passed away. “Hitler went into a dance and congratulated himself as if he had himself brought about this event,” said Heinz Lorenz, Hitler’s press attaché. “He exclaimed, ‘This will mean I will win the war! This is our victory!’”

One must assume that by April 19th, with:

that even Hitler would finally acknowledge the end was imminent and no [Brandenburg Miracle]1 was happening. 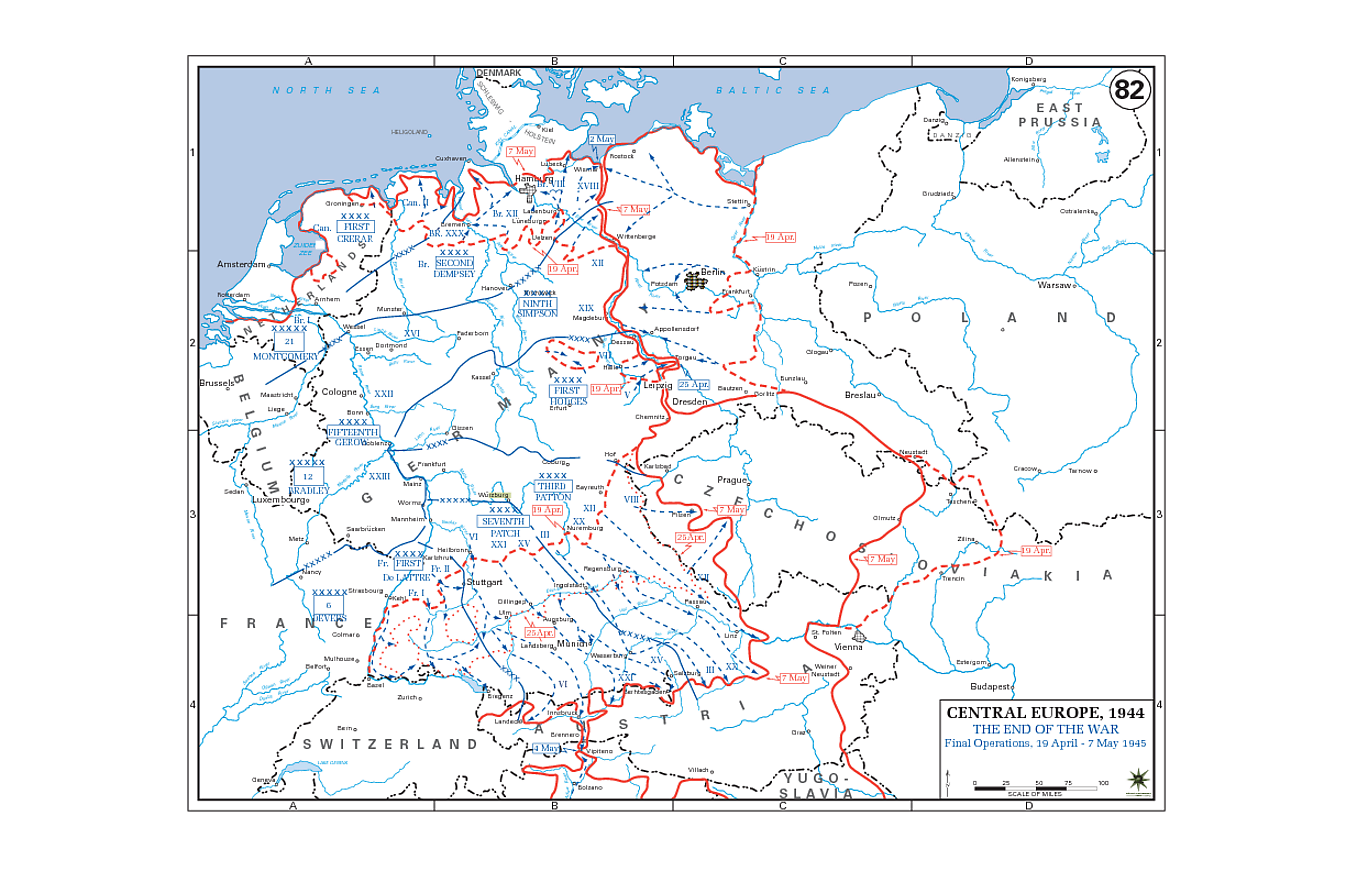 Not the answer you're looking for? Browse other questions tagged united-states world-war-two nazi-germany soviet-union hitler or ask your own question.

50
Is the claim that Hitler came to power democratically justified?
8
Why was the 1944 surrender of 20,000 Germans on the Western Front remarkable?
14
Was there a constitutional mechanism to overturn the election of Adolf Hitler?
4
How were snipers used on the western front during WW2?
0
Did anyone besides Heinz Guderian believe that Germany needed to “liberate” Soviets to prevail on the eastern front?
14
Is it true that Hitler led to the invention of the atomic bomb by the Americans?
1
How many troops did Hitler send back from the Eastern front to face the Allies' assault?
8
How long did Adolf Hitler serve on the front lines as an infantryman in WWI before becoming a courier?