Is history always written by the victors?

The famous "history is written by victors" saying argues that the victors overwhelmingly influence historical accounts.

Are there any examples of history written by the(or THE) losers?

"History is written by victors" may itself be an example of history written by the losers! While the quote is commonly misattributed to Winston Churchill, it's origins are unknown and it might be inspired by Hermann Göring's quote:

We will go down in history either as the world's greatest statesmen or its worst villains.

On a (perhaps) more serious note, the aftermath of the Fall of Constantinople (1453) is a prime example of history written by the losers. A wave of Greek scholars emigrated to the west after the event that essentially marked the end of the Byzantine Empire, bringing with them extremely biased accounts of Ottoman brutality. The vilification of the Ottomans was the prevalent opinion in the Western world for centuries and served as propaganda material as late as 1832, when the Greek War of Independence ended. Even modern attempts at identifying the historical truth of the era, such as the 2011 "1821" documentary, are met with controversy in Greece.

A more recent example would be the American Civil War and the Lost Cause movement, a term borrowed from Edward Pollard's 1866 book The Lost Cause: A New Southern History of the War of the Confederates : Comprising a Full and Authentic Account of the Rise and Progress of the Late Southern Confederacy--the Campaigns, Battles, Incidents, and Adventures of the Most Gigantic Struggle of the World's History.

Lastly, a (perhaps controversial) example of history written by the losers is the account of the Vietnam War. Although whether the US lost the war is debatable they certainly didn't win it, still the overwhelming majority of historical documentation for the war comes from the US.

All the bad press given to Vikings (and the like) by angry monks suggests not always. Depends if the victors build a tradition of literacy and of documenting history or whether they just go build more longboats and get drunk.

An important example from ancient history is the Peloponnesian war. The most important account of it comes from Thucydides, "the father of history". Thucidydes was an Athenian, and Athens lost the war. I am not aware of any Spartan accounts of this war that survived.

Here are some other examples:

The US Civil War. Much of the history was driven by the South's need to justify itself especially after the first 20 years up to about 1960 or so.

The Fall of the Roman Republic Virtually all of the surviving histories were written by the conservative factions of Rome and not by the Caesarian side. Augustus didn't mind that much as it let the elite blow off steam while he ran things as suited him.

The Arab-Israeli conflict. The Arabs lost to Israel in 4 wars (1948, 1967, 1973, 1982) but their version of history is the most accepted today (even the universal acceptance of the term "Palestinian people"). Thus Israelis are portrayed "colonizers", Zionism was portrayed as racism in the UN, and Israel as an apartheid state. This while Israel is the historical homeland of the Jewish people (recognized by the league of nations 1922), Jews are depicted as pigs all over the Arab world, and Israel is the only country in the Middle East in which Arab citizens have basic human freedoms.

The entire Bible is pretty much written by the losers of history, written from the perspective of the Hebrew slaves, the prophets, and the exiles, rather than the Pharaoh, the king, and the conquerors, respectively. Egypt, Assyria, Babylonia, Persia, the Greeks, and the Romans all had their empires, but the perspective was taken from a particular people who lived under the control of these empires. In the Greek New Testament the early followers of Jesus took those identities on themselves as well. Unfortunately, the Christians became major oppressors a few centuries after that. Some of us who are sticking with the church are working to undo that false (but long) step.

I am reading Andrew Weatcroft's's The Enemy at the Gate: Habsburg, Ottomans, and the Battle for Europe (see also here). It contains this relevant statement in relation to a (from some perspective) loosing party rewriting history:

Of course, once the great [Ottoman attack on Vienna in 1683] failed, history was rewritten and the sultan portrayed as wisely dubious from the outset and latterly wholly innocent of his duplicitous servant's machinations.

That servant was Kara Mustafa, Grand Vizier of the Ottoman Empire under Sultan Mehmet IV, who survived the battle in the remote West but not its aftermath closer to home: he was strangulated on orders from the sultan, his co-loser in (and according to this source perhaps the co-initiator of) the failed campaign. 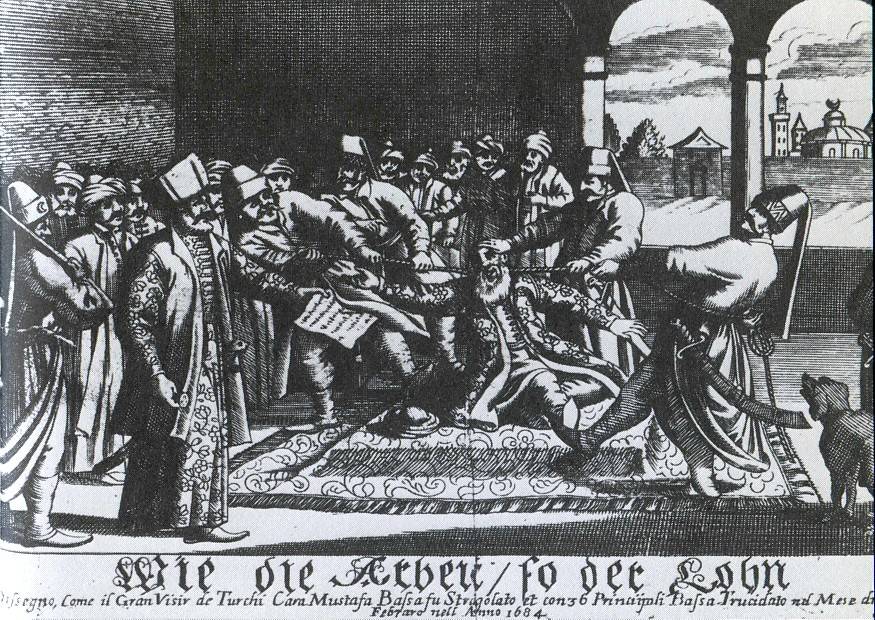 The Spanish Civil War is an example of loser-dominated historiography. That the Rebels won is beyond doubt, but the Loyalists wrote all the history... it's hard to think of a history of the war which is sympathetic to the winning side.

If you are looking for examples: The history of most major invasions of Europe is written or significantly influenced by the Europeans (who happened to be on the loosing end). The Huns and Attila, the Mongols, the Vikings (OK, they are European, too), the Ottoman Turks; even if there is a significant body of information (e,g in case of Ottoman Empire), the history is heavily dominated by the stories of the European side.

This is similarly true for Chinese history: China was beaten many times and conquered by their northern neighbors, who even gave several dynasties to them. Yet I see more Chinese accounts of the events than Manchurian or Jurchen.

Howard Zinn, in his A People's History of the United States, claimed to be endevoring to do something quite similar to that.

If you are interested in USA history, I highly reccomend it for two reasons. The first is that many others with that same interest will be familiar with it, so you can at least hold your own in conversations. The other is that it gives the best coverage of the (typically ignored) union movement in US history that I have seen. This was arguably the defining social issue of the late 19th and early 20th century. It is tough to understand the events of this period without it, yet most other US history books practically pretend it didn't happen.

I understand there is also from another author A People's History of the World, written in the same vein.

An interesting article in History Today by Katherine Weikert is devoted to this very topic. The three examples studied in depth are:

I do recommend reading the article, it's very enlightening - and available for free.

The Battle of Thermopylae is completely written by losers. (All citations from the Wikipedia article)

First of all, the first myth about this battle is that there were only 300 defenders, but in fact there were at least 20 times more.

Secondly, the legend says that all but one of them died, but losses were about 4000.

Third, it was not a clear strategic success of the Greeks.

Fourth, it was not a high-losses win of Persians (although they lost much more soldiers than Greeks):

Not the answer you're looking for? Browse other questions tagged historiography philosophy theoretical-history or ask your own question.

35
Under which conditions does the losing party actively commemorate a battle?
13
Are these remarks by Napoleon on Jesus genuine?
22
Which lost historical documents, when uncovered, led to the most substantial revisions in historiography?
6
Were the "hussars" that Jan Sobieski used at the battle of Vienna actually elite troops?
10
What actual proof is there for Carthaginian child sacrifice?
2
Did the Latins see the Etruscans as a plague?

19
Is there any research explicitly contradicting facts in Suvorov's "Icebreaker" book series claiming that Stalin intended to attack Hitler in 1941?
20
How to research controversial history?
5
Tolstoy's view of history
7
Is there any evidence that the book of Isaiah was written before Cyrus?
2
How do we know that the Tiwanaku Empire actually existed as an empire
11
How is progress in history made?
4
Are the historical sources from the ancient history trustable?
4
Are there alternatives to tripartite periodisation of history?