For central Europe, between 1925-1930 may be considered realistic.

For France possibly sooner due to a higher motorized density between 1920 and 1930.

The transition was uneven due to certain conditions

Long distance transportation (> 50 KM), instead of train transport, started in the middle of the 1930s. 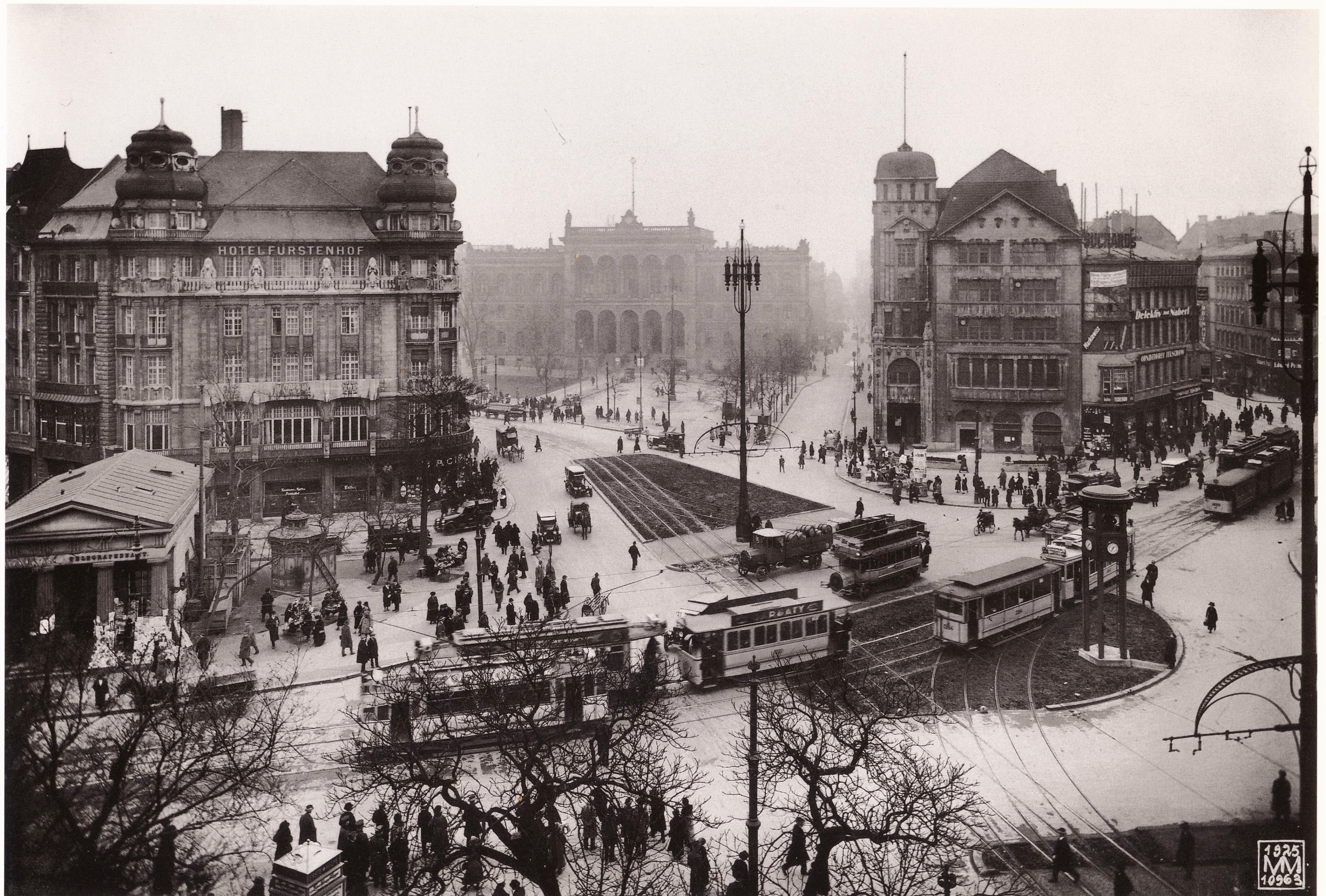 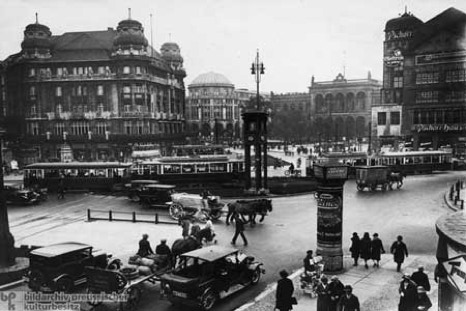 @LangLangC On Potsdamer Platz you cannot find a picture with horse after 1919,... 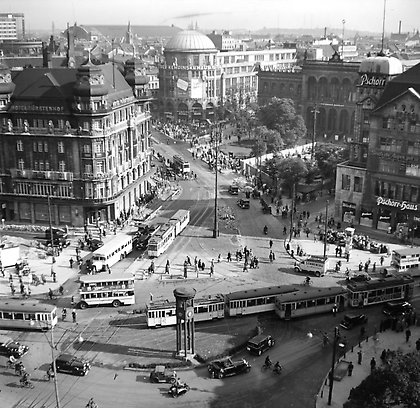 The garbage collection fleet consisted of: 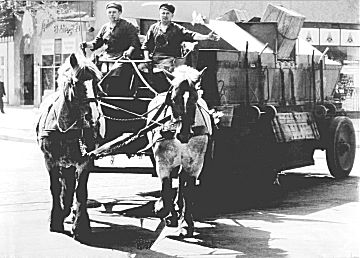 This question is way too basic and can be answered with a single link:

In 1912, New York, London and Paris traffic counts all showed more cars than horses for the first time.
— Raymond A. Mohl: "The Making of Urban America", p124, Rowman & Littlefield, 1997.

For personal traffic transport it was even:

The turning point in the change from horse to motor traction [in London] was 1910, a year earlier than in Paris.
— Gijs Mom: "Costs, technology and culture Propelling the early taxicab, 1900–25", The Journal of Transport History 24/2

Since the frame for the question is underdeveloped, let's explore it.

The competition is not really between horse and automobile, but between horse-drawn vehicles and automobiles (petrol or electro-powered), trams, subways/metros, and if we include "a lone rider", of course also between horse and pedestrian, bicycle (nb French: 'steel horse'), motorcycle. Unearthing and comparing "numbers of horses vs number of automobiles" (as registered in the books), will therefore alone not reflect actual traffic conditions. Only thing sure with that number comparison: the transition reflected in traffic conditions on a road will be much earlier than when automobiles were really more numerous than horses.

We find one car truck vs a transport carriage drawn by 8 horses, do not know which transport is really meant: people or freight, or both? Vehicles actually 'on the streets' (driven) vs registered (shift working, horses changed/rested, private luxury cars mostly parked away vs always on the street cabs and other commercial transports… All that with "exact year" when we describe a transition period from 1900–1928 means we will see different years for different modalities that are not overly lending themselves for direct comparison.

A most detailed compilation of the relevant numbers for Paris, or really France, is in Jean Orselli: "Usages et usagers de la route : pour une histoire de moyenne durée (1860-2008)", Dissertaton, Paris, 2008. (At 4 volumes towards 1380 pages perhaps a bit overkill).
Glimpse of it for entire France in Gijs Mom: "Atlantic Automobilism: Emergence and Persistence of the Car, 1895-1940", Berghahn Books, 2014, p65 — which gives an overview for North America and Europe.

Since it was indeed a bit behind on that front, and we do not have a good answer for Berlin, lets include some basic numbers for that city as well:

In reality this turn away from urban horses is really shown in one picture the other answer abuses: 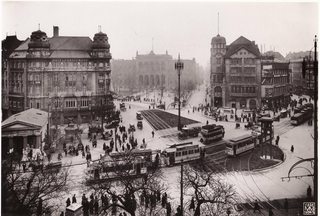 It is clearly dated from 1925 (if you look at more reliable sources than a random flickr account; or just read what's written on the picture?) and there we see 1 bicycle, 3 one-horse-carriages, 1 two-horse carriage, 6 electric trams, 16 motor cars… After 1920 horses on these pictures disappear, compared to the number of cars: rapidly. Although their total numbers didn't dwindle as fast one might infer from such pictures, total traffic just increased that much.

Or, same photographer, same year, 1925, no horses, many cars, bikes, and bipeds: 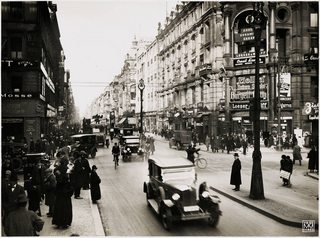 The horse omnibusses were replaced in Berlin with cars since 1905. Since 1923, no more horse-drawn carriages for the omnibus line were used at all. After 1928 no more licenses for horse-'taxis' (Droschken) were issued at all. In 1925 the last ever horse-drawn postal packages carrier made its final tour.

For comparison, a shot of Potsdamer Platz in 1910, (with counting the pixellated version: already 10 horses drawing 7 vehicles, 5 trams, 8–10 cars): 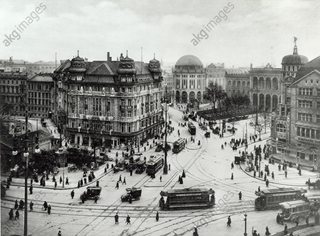 No single picture can ever be absolute proof for anything regarding statistics. They are not intended as such. But the ones presented here illustrate the change in numbers quite nicely.

The above table shows implicitly 'one horse=one vehicle' which is inherently false, especially for extrapolating traffic, as horses as draft animals need to rest after 3–6 hours, and to draw a cart one may need anywhere from 1–8 animals for one vehicle. The reason why Paris abandoned all horse omnibusses in 1913.

Earlier horsebusses used more than one horse and these needed to rest frequently. Although this was quite often ignored when fin-de-siecle economy brought an oversupply of horses into an already stagnating business and the animals were regularly just overworked to death, if they weren't killed by accidents with other traffic.

For Berlin a street dominating vehicle was the Droschke, if sorted by propulsion:

Depending just a bit on definition: all non-horse, or only petrol-powered?

Registered petrol droshky vehicles for 1918: 2767! While that is an impressive number, the statistical yearbook warns:

of these, 2319 were not in service, because the lack of rubber

As absolute numbers distort the view towards an ever increasing traffic, a seemingly 'stable' number of city horses does not reflect their share in urban traffic. Trucks and taxi cabs overtook the horses much sooner in that regard. This was amplified by the armistice in 1918 freeing up a large number of army vehicles. (Ir. F. W. Geels: "The dynamics of transitions in socio-technical systems: A multi-level analysis of the transition pathway from horse-drawn carriages to automobiles (1860–1930)", Technology Analysis & Strategic Management, Volume 17, Issue 4, 2005. )

For France that effect was even more spectacular for transport vehicles:

Consequently, correct reading of the source used in another answer gives you the following data:

Between 1913 and 1925 the amount of urban horses was drastically reduced. (p128) and for the first ever country-wide traffic counts we see that 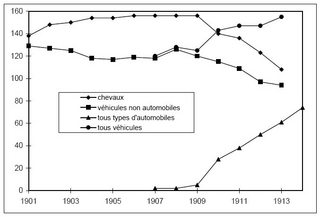 But as we look for Paris data: 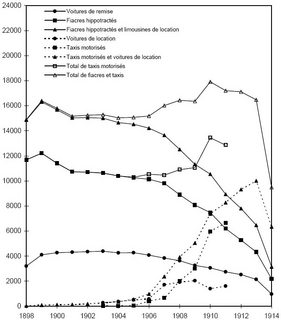 Since I don't want to let this answer appear too much (as usual, it seems ;) as "back & white", some colourful additional qualifications: the question asked for a change in a relationship of numbers. Whether any mode of transport was completely gone is pretty, but irrelevant, and unanswerable, except for: "never".

as in Berlin, despite such businesses declared completely dead by 1928:

Not the answer you're looking for? Browse other questions tagged europe technology transportation cities automobiles or ask your own question.

10
When did the Taxi become associated with the checkered pattern?
6
When did the U.S. Postal Service completely transition from horse-drawn to motorized transport?
4
When did the key advances in vehicle suspension happen?
8
When did leaf springs appear in vehicles?
11
How many trucks did Russia and Germany have at the start of Barbarossa?
9
Who first conceived and developed the acoustic homing torpedo, and when?
12
When did the last (non-tourist) commercial stagecoach line run in the USA?
4
Did the Soviet military in fact fear that the Space Shuttle would be used as an orbital bomber? If so, why?
4
What was the technology in pre-war traffic recorders?