Did the Soviet leadership ever address the American people on American TV?

As part of the détente between the United States and the Soviet Union, American president Richard Nixon made an 18-minute address to the Soviet people, which was broadcast on Soviet state television on May 28, 1972. New York Times journalist Hedrick Smith, writing in 1973 (The Russians, p. 605), indicated that this was one of two such public addresses by an American president. (I am not sure when the other address was made or which president gave it. Perhaps Smith was referring to the Soviet broadcast of Nixon's kitchen debate in 1959, though Nixon was not president at the time, and this was a dialogue between Nixon and Khrushchev rather than a direct address to the Soviet people generally.)

Did the Americans ever reciprocate by inviting the Soviet leadership to arrange for a public address to the American people on American television? If so, when did this broadcast (or these broadcasts, if there were more than one) occur, which leader(s) spoke, and are there any recordings available online?

Leonid Brezhnev addressed the American public on radio and television the 24th of June, 1973. His speech can be read here and also here. There is a clip of the speech (seemingly wrongly dated 25th of June) on YouTube. He begins with:

I highly appreciate this opportunity of directly addressing the people of the United States on my visit to your country. 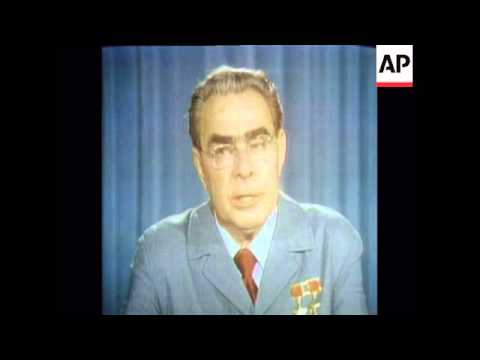 Interestingly, Voice of America (VOA) Russian-language broadcasts were being jammed at the time so Brezhnev's own words during the visit were being blocked by his own jammers until, that is, his speech on the 24th. For this event, the jamming stopped two minutes before the speech began and "remained off for the duration of the speech."

Earlier, at the end of the first state visit by a Soviet leader to the US, Nikita Khrushchev had addressed the American people in a television press conference on the 27th of September, 1959. His speech can be read here. The speech began with:

I am glad of this opportunity of talking to you before leaving for my country. We liked your beautiful cities and fine roads, but most of all your amiable, kind-hearted people. And let these words of mine not be taken as the guest's customary tribute of courtesy and respect to his host

There's an audio recording of this speech here, but some of it is a statement read out by a Soviet official. However, Khrushchev's voice can be heard introducing the speech and at other points, usually with the translator talking over it.

Not the answer you're looking for? Browse other questions tagged united-states soviet-union political-history television or ask your own question.

9
Did the Great Society programs ameliorate poverty or exacerbate it?
19
Did the US and Soviet navies really come close to blows in the Indian Ocean in 1971?
16
In post-WW2 Soviet Union, did most people have bank accounts?
28
Why did Stalin and the Soviet leadership have Leon Trotsky assassinated?
5
Did Soviet Union have the requirement that people submit yearly tax returns?
30
Was Nixon's Vietnam claim right before the 1968 election true?
5
Has a German U-Boat ever transported an American during WW2?
5
Did the Soviet ever attempt “innocent passage” thru American waters?
4
Did Soviet people know Stalin's birth name?