Is this costume plate from Theatrum Orbis Terrarum correctly colored?

I have been spending some time lately going through some old atlases online, and noticed some discrepancies between some images coloration. We have noted on another question that the individual responsible for coloring a work is not necessarily the same professional who originally inked it, and this seems to be another illustration of that problem.

When looking into the Theatrum Orbis Terrarum,originally printed on 20 May 1570 (a useful version which even allows zooming and clips can be found at the Library of Congress site), I noticed some discrepancies when researching online to investigate the other issues. I discovered some auxiliary plates (not appearing in the LOC version linked above) also credited to Abraham Ortelius, showing costumes and heraldry from the time.

But two versions I find are quite dissimilar:

The first, found in Wikipedia, but then sourced to (and hi-res version) here. This source claims a publication date of 1606. 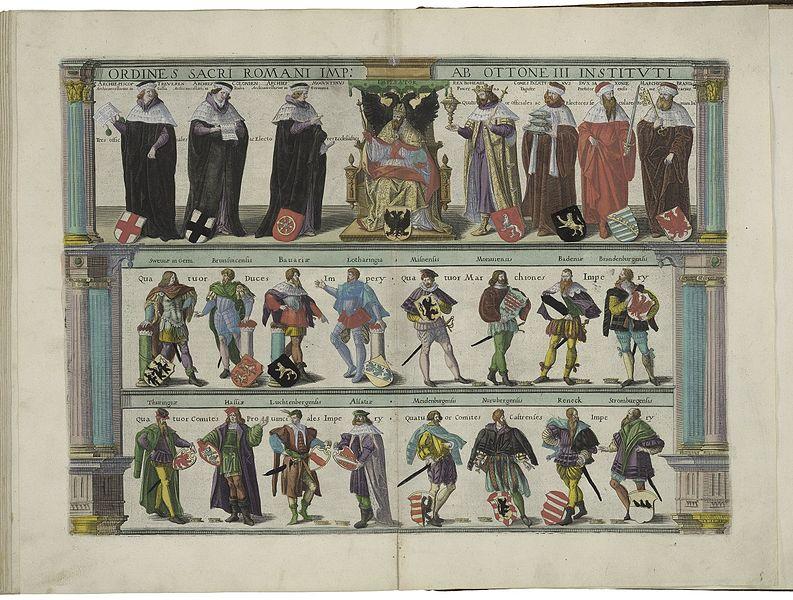 The second, from a German Wikipedia entry, seems to show better attention to detail, but shows a completely different set of colors. This image is credited there to Antonie Wierix, though virtually identical to the image published by Ortelius. At LangLangC's prompting to solve this issue, I found an explanation on a page at raremaps.com, stating:

Finely engraved image depicting a group of the Electors of the Holy Roman Empire, originally engraved by master engraver Antonie Wierix, for Gerard De Jode in 1593, and later re-issued by Ortelius....This engraving was published from 1593 for the first time in the atlas by Gerard de Jode. The plate was later acquired by Vrients and was then from 1603 onwards included in Ortelius's 'Theatrum' and the 'Parergon'. 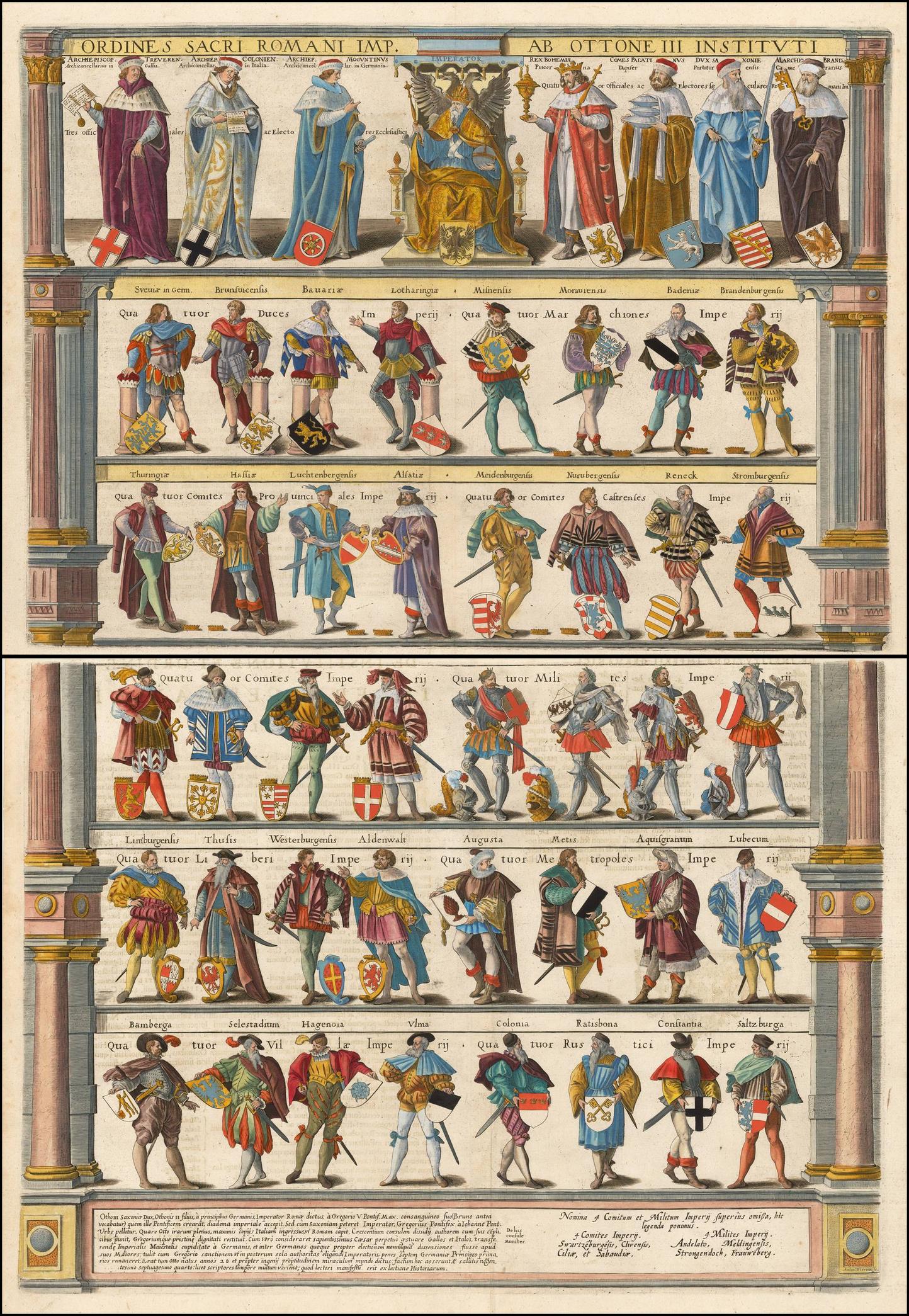 Granted, some variation in regional costume is expected, but some of the depicted figures would be wearing what I would call 'robes of office', and these should be 'known'. The heraldry, on the other hand, is quite rigidly defined as to the colors or tinctures used in a coat of arms, and variation is definitely wrong.

I just found an older (1493?), but quite similar image here. A nice online version of these plates can be found on pages 412 and 413 of the Nuremberg Chronicle from the Cambridge Digital Library (and of course the colors there are different as well). This may have been the original reference drawn from by the original engraver Antonie Wierix in 1606, and later published by Ortelius. 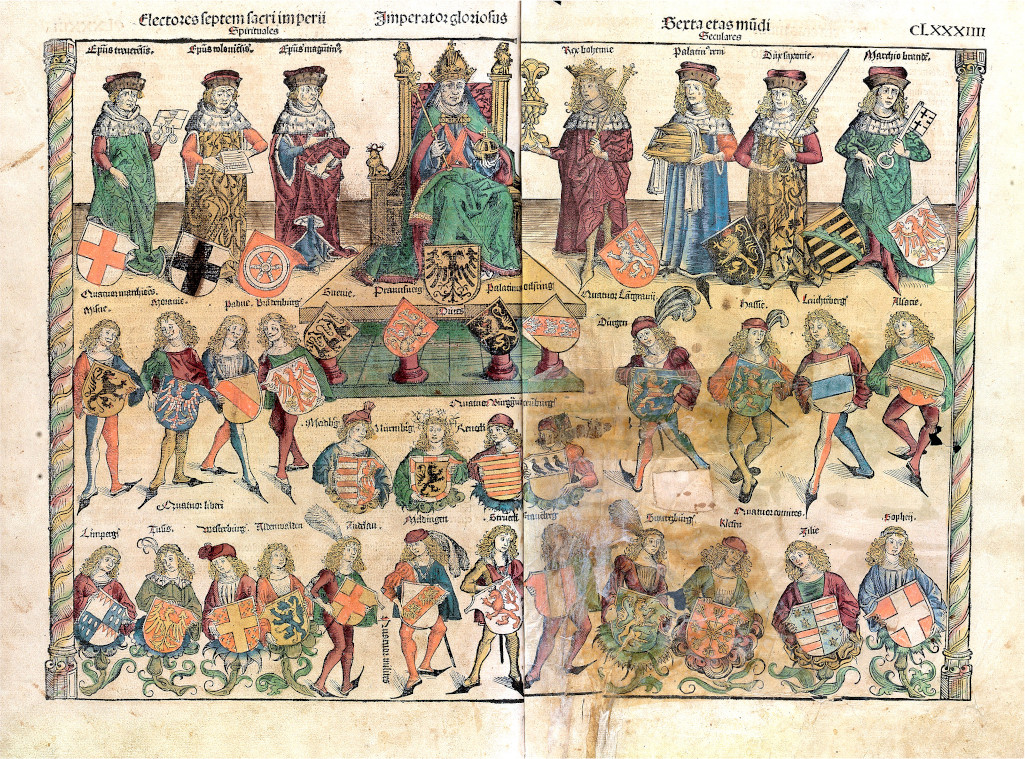 My question is, through historical information describing robes or costumes of the depicted individuals, or through the examination of the heraldry displayed, can we determine which image is more correct (if either). Or are these color changes unimportant...

(Note that if this error can actually be somehow attributed to Ortelius, it may provide some insight into this question)

As far as I call tell, unless the spiritual electors wore their clerical vestaments, and they do not in those images, their elector's robes and those of the secular electors should have been the same color with only minor differences in the precise shade. I believe that the Golden Bull of 1356 specified the color of the elector's robes.

The other princes and nobles in the images are wearing their individual more or less normal and everyday costumes, and the colors of the individual costumes do not matter because a noble could wear pretty much whatever color combination he wanted to on any particular day.

The other thing where color matters is in the coats of arms. Any depiction of a particular coat of arms that is fathful to the verbal blazon or description of the coat of arms is valid, no matter how much different depictions vary from each other. Normally a heraldic artist should use the same batch of mixed paint to depict all the red in coats of arms in a picture like this. But if for some reason the artist had to mix up a different batch of red paint with a different shade of red to paint some of the coats of arms that would be all right, as long as all of the shades of red were clearly red and not any other color.

So there are lists of the coats of arms that are included in depictions of the quarternion of the Holy Roman Empire.

In the two images the arms are so small that it is sometimes hard to tell one color from another.

Among the dukes, the coat of arms of the Duke of Lorraine was "Or, a bend gules, with 3 eaglets argent" but looks more like white with pale blue eagles in the upper image.

So if the colorists of the various different versions of this image couldn't always use the right colors or the same colors for the coats of arms, even though the colors of coats of arms are fixed by tradition and law, there is no reason to imagine they would try to color the costumes worn by the figures the same way each time.

The quarternion coats of arms were often depicted with each set of four on a different wing of the eagle in the imperial coat of arms.

Here is a link to an image and Aeliandil's answer lists the various coats of arms:

Here is a link to another site which has several answers trying to list the various coats of arms.

I note that different states might be included in different versions of the quaternion, since it was an unofficial listing. This question asks why the Archduchy of Austria is not included in one version of the quarternion:

Here is a link to the arms of the electors:

The other coats of arms are not arranged by rank, as in the Quarternion, but by which Imperial Circle the states were members of. This makes it harder to compare the two groups of coats of arms.

Not the answer you're looking for? Browse other questions tagged art clothing heraldry cartography or ask your own question.

10
What is the ruined tower in the background of this 1649 drawing of the Igeler Säule by Joan Blaeu?
11
What's this flag flying on a fort at Kodiak, Alaska?
4
Can the Notitia Dignitatum help identify colors for Late Republic/Early Imperial Roman Shields?

2
Is a "buckle plate" the same thing as a "buckle chape"?
6
Did ninjas ever use a costume like the one we usually see in films?
5
Does the rule of tincture apply within a variation of the field?
12
What is this flag?
2
How is this pattern from Pompeii also in Cappella Sansevero?
25
Who are these red flag worshipers from these early maps?