What was the purpose of each project site during the Manhattan Project?

I'm looking for an answer as to what the purpose of each project site was during the Manhattan Project. The following image illustrates (but only includes some of the sites) where each site was located and their name. 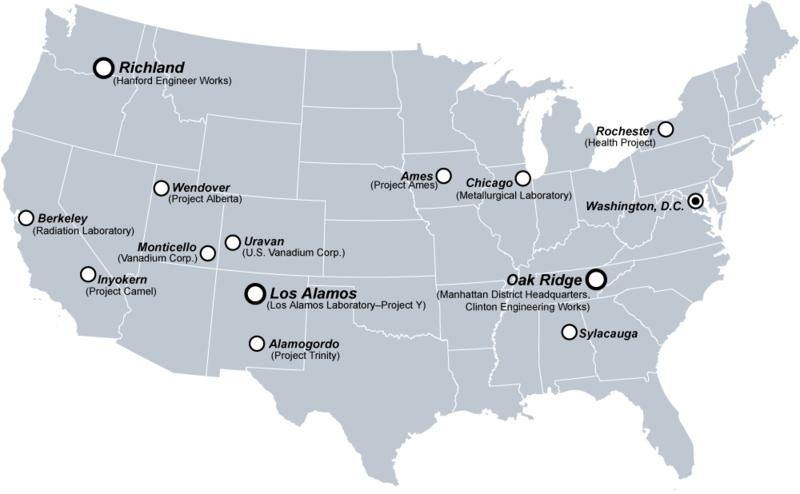 Is there an exhaustive list of the name of each site and their purpose?

Hanford and Oak Ridge had one common advantage: easy access to a lot of electric power.

Both places (especially Hanford) also had a lot of fairly clean cold water to serve as cooling water.

Okey, the intent in the sites:

Hanford was intended to be the plutonium metal producing site (later the Savannah river reactors was built too) including the piles and the plutonium extraction plants in different generations.

Los Alamos was the plutonium and uranium research sites where issues regarding the weapon design was researched and tested (including the kick the dragon test.) I have a copy of the Rhodes paper (why that would be found in a book store in 1994 in a small city in Sweden could be because that city is built on the largest deposit of uranium in Europe....)

The AEC has a memorial text: An Atomic History - Reactors, Fuels and Power Ascension 1

There were four main sites during the Manhattan Project. Specifically, two research facilities in Chicago and Los Alamos (New Mexico), and two complexes in Tennessee and Washington State for the actual creation of the atomic bomb.

The initial theoretical work was done in Chicago, because there was a large concentration of nuclear scientists and some existing facilities. In 1942 and into 1943, experimental work was done on controlling the fission process in nuclear reactors, using first graphite, and later heavy water.

By 1943, continuing the experiments in Chicago was deemed too dangerous, and the theoretical and experimental work on the bomb mechanism was moved to newly built facilities in Los Alamos, New Mexico, which was far from cities, and was therefore isolated from the general population.

The actual "manufacturing" (e.g. of plutonium from uranium), was initially done at a newly built complex at Oak Ridge Tennessee, which had the advantages of cheap hydroelectric power produced by the government-supported Tennessee Valley Authority, and was "somewhat" remote from population centers. Later, it was decided that nearby Knoxville constituted a population center, so a new, even more remote manufacturing facility was built at Richland, Washington (the Hanford facility), which had hydrolectric power from the Snake River, but was farther away from cities than Oak Ridge.

There were also a large number of "satellite" facilities, each with specialized functions, but this covers the main ones.

Not the answer you're looking for? Browse other questions tagged united-states world-war-two nuclear-weapons maps nuclear or ask your own question.

2
What does 'trade in' mean in this article on the Westway project?
3
What was the extent of influence of James Byrnes on President Truman in the decision to use nuclear weapons?
2
Non-voluntary deferments in WWII?
4
When and why was the Shinkolobwe Mine flooded and re-opened?
2
Is there a location to find the personnel roster of the No. 300 Polish Bomber Squadron during WW2?
44
What is the logic for the map maker classifying the map this way, specifically in Canada?
0
How much support did America give to the scientists working on the Manhattan Project?
5
In WW2 USN ships, what was the weight of a typical boiler?