Why are stamps put in the top-right corner of post?

INSTRUCTIONS GIVEN UPON THE INTRODUCTION OF THE PENNY POST, 1840

When the first adhesive stamp (then usually called a 'postage label stamp'), the Penny Black, was introduced in May 1840, instructions were given to place the stamp above and to the right of the address. These instructions were printed on the sheets of 240 stamps by the printers Perkins, Bacon & Co. (an example can be seen here). The decision to do this was made by Sir Rowland Hill, the primary force behind the new postal system.

Rowland Hill decided as early as December 31st, 1839, that "Certain instructions as to the position of the stamp when used [were] to be engraved round the margin of the plate." On March 26th. 1840, he writes : "In the margin to the plates insert the following inscription — if possible once at each end and twice on each side of the plate....Place the label above the address and towards the right hand side of the letter.

Source: Sir Edward Denny Bacon, 'The line-engraved postage stamps of Great Britain printed by Perkins, Bacon & Co.; a history of their production during the forty years, 1840-1880' (1920)

Unfortunately, the above (otherwise detailed) source does not give his reason for this instruction, and neither do Hill's own The life of Sir Rowland Hill and the History of penny postage (1880), nor his daughter Eleanor Smyth's work Sir Rowland Hill; the story of a great reform (1907). An earlier publication by Hill, Post office reform: its importance and practicability (1837) mentions only the idea of putting the adhesive stamp on the back of the envelope. However, it seems most likely that Hill (1) was following precedent (albeit an inconsistent one) and, (2) gave the instruction as one of a number of decisions aimed at making the new postal system as simple as possible.

1. USE OF THE TOP RIGHT CORNER BEFORE THE PENNY POST

On the first point, precedent relates to the fact that handwritten postal charges, as well as franked letters, were most commonly (but not always) marked above and to the right of the address, as shown in the examples below: 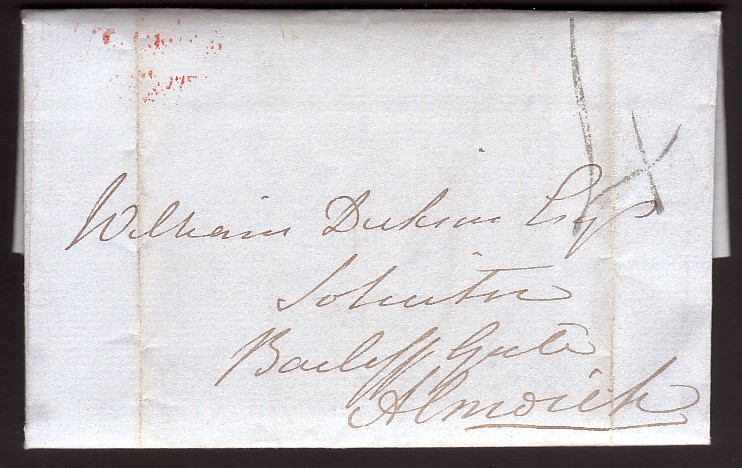 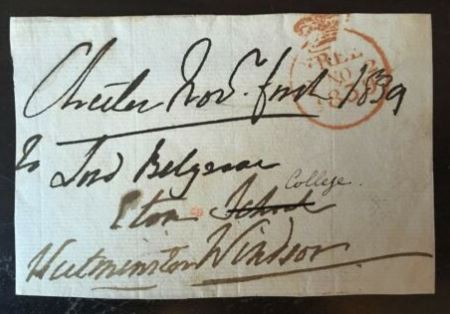 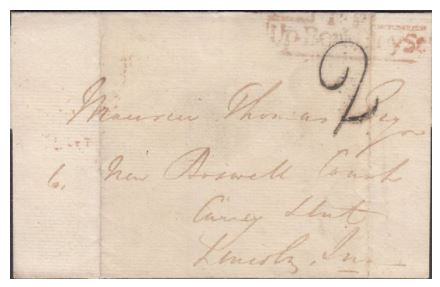 The same can be found for the United States:

The Post Office Department issued its first postage stamps on July 1, 1847. Previously, letters were taken to a Post Office, where the Postmaster, clerk, or assistant would note the postage in the upper right corner.

Source: Office of the Historian, 'The United States Postal Service: An American History' (2020)

Why usually the right side, not the left?

As noted in comments above, the use of the right part of the envelope is, in part, likely due to the fact that most people are right-handed. Note that, prior to the introduction of uniform postage rates for any distance within the country (see the 1839 Postage Act), the post master would have needed to see the address to determine the cost of sending the letter because a letter from London to Dover, for example. would have cost less to send than one from London to Leeds. Writing the cost in the centre or on the left of the envelope would likely mean the hand covering the address, making it difficult to read (and maybe double check) the address and write the postage rate at the same time. For a righthander to put the postage rate on the left is not a major hassle, but it is easier to put it on the right side. The fact that some letters have the postage written on the left side may reflect a small number of left-handed post masters.

Why usually the top, not the bottom?

The above, though, does not explain why the top right rather than the bottom right was most commonly used even prior to Rowland Hill's instructions. Again, practical considerations are the most likely explanations. First, under the old system, postage was post-paid, not prepaid, so the deliverer and receiver would need to check the cost at the point of delivery, before the letter could be handed over. As we tend to look at the top of an envelope (or sheet of paper) before the bottom, it seems logical to put the price at the top where it will be more quickly seen. A possible second practical consideration is that long addresses sometimes leave little space at the bottom of the envelope, and I would venture that the top right corner was/is more likely to have some empty space than the bottom right corner.

In the Bacon, Hill and Smyth works cited above, Rowland Hill was concerned that the new postage system would operate smoothly, efficiently and profitably in all areas. He paid a great deal of attention to detail, and it is likely that he realised that postal workers checking large numbers of envelopes for the new postage label stamps would be able to work more quickly if these stamps were (more or less) to be found in the same area of the envelope (i.e. the eyes would quickly learn where to expect to find the stamp at first glance). Thus, what had previously been the only most common location now became the standard - the top right hand corner.

In the US, there does not appear to have been an actual instruction to the public to place stamps in the top right corner. According to Daniel Piazza, Chief Curator of Philately at the Smithsonian National Postal Museum,

When postage stamps were first issued in this county in 1847, there appears to have been a great deal of confusion over how to use them and possibly also where to place them, at least for a time,...Placement was less important in the days when all stamps were hand-cancelled individually by postal clerks. With the introduction of high-speed cancelling machines starting in about the 1890s, the placement of stamps in the upper-right corner became more important to be as efficient as possible.”

(Note that the article which cites Daniel Piazza is somewhat misleadingly titled.)

As the postal reforms by Britain from 1839 had proved to be largely successful (and profitable), other countries mostly followed the British example, though it is clear that the preference for the use of the top right corner for prices and franking was already widespread in the US and many other countries.

Things can go wrong, even when people read the instructions...

As an amusing footnote, there was still some confusion about the placement of adhesive stamps in the UK despite Rowland Hill's best efforts. Shortly after their introduction, Hill related the following story:

While the stamps were still new that large section of mankind which never reads public instructions was occasionally at a loss where to affix the adhesive. Any corner of the envelope but the right one would be chosen, or, not infrequently, the place at the back partly occupied by the old-fashioned seal or wafer. Even the most painstaking of people were sometimes puzzled, and a certain artist, accustomed, like all his brethren of the brush, to consider that portion of his canvas the right hand which faced his left, was so perplexed that he carried to the nearest post office his letter and stamp, knocked up the clerk, and ... asked politely, " Which do you call the right hand of a letter?" "We've no time here for stupid jokes," was the surly answer, and the window shut again directly.

Not the answer you're looking for? Browse other questions tagged united-kingdom mail or ask your own question.

19
When did the English and Americans realize that vegetables were healthy?
10
Between the 7 Years War and 1776, was there any effort to have the colonies represented in Parliament?
16
In Edwardian England, did poor families arrange to have their children buried in the graves of unrelated adults?
2
Has The USPS / APWU Ever Had A Strike Since 1970?
40
In the “Christmas truce” of 1914 were there any football (soccer) matches between British and German troops?
7
Did American colonists object to the protections of Catholicism in the Quebec Act?
0
What did Dicey in 1889 mean by “electoral body”?