Who is depicted in this Soleimani propaganda image?

While reading news and analytics about Soleimani and the fuss his death made, there is a teaser image, where I cannot identify the shown persons. The news is in German, which can be found on telepolis.de

I know the Soleimani person, of course, in the center hugging the cloaked soldier and Chomeini on the right border (Excuse the Orthography, I use German person names.)

I am curious and would like to know more about these people and their impressions they made in the Iranian history. Perhaps I can learn more, but therefore I need names and would appreciate your help. Thank you. 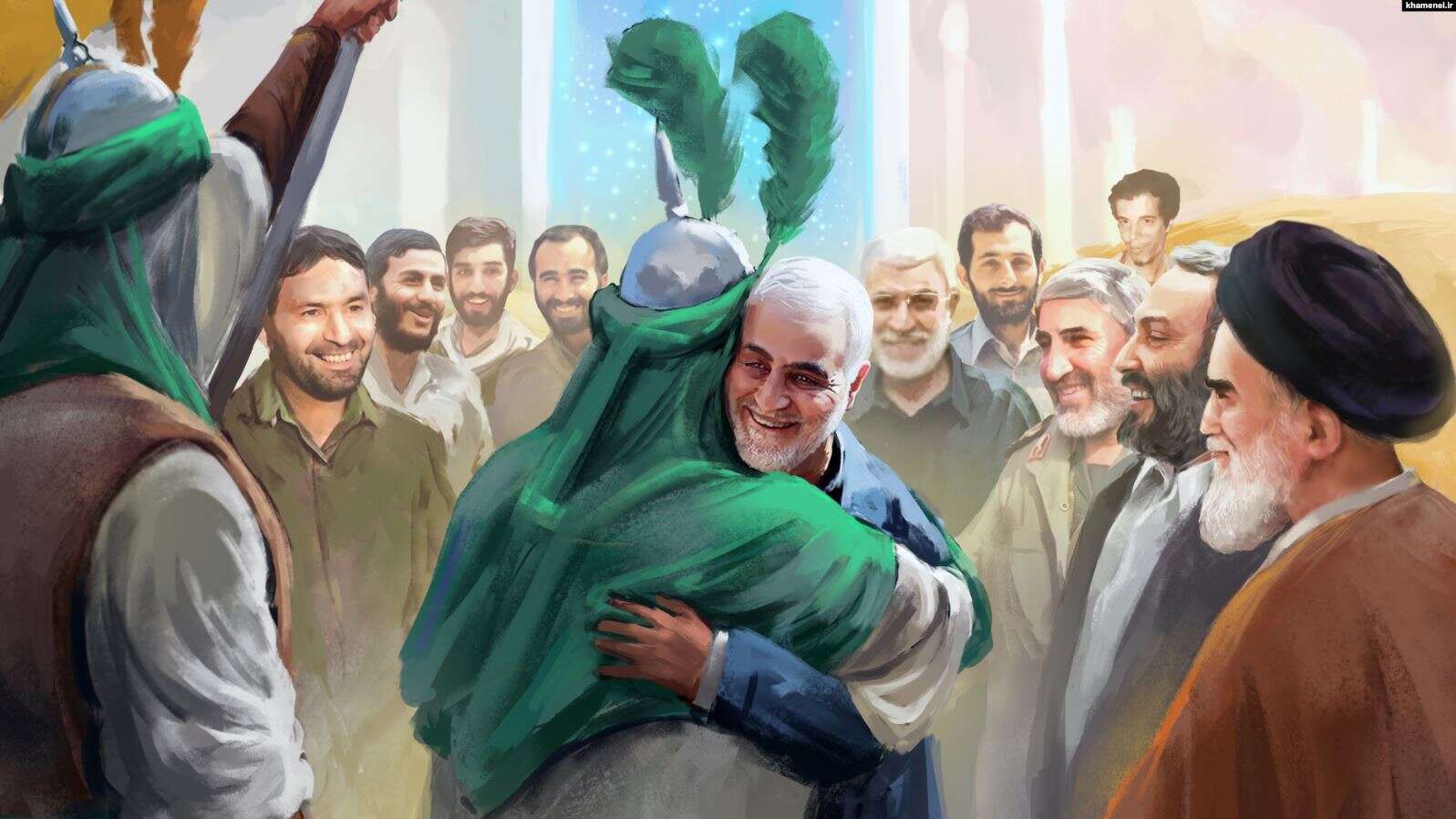 The website apparently originating this image has a fuller/bigger version of it: 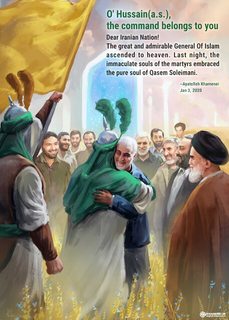 From that we can conclude a few things:

Most other people on that picture show a certain Persian/Iranian 70s/80s look to them. That's because they are most probably Shahid, or martyrs, mainly from the Iranian revolution and the Gulf War (Americans: between Iraq and Iran 1980–88).

Which exactly I can't tell for sure. But the principle is very widespread in Iran: 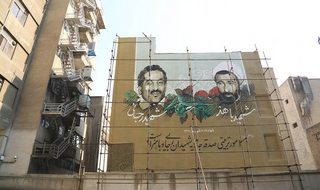 — Random example: Carrying out the mural design project of the "Martyr Rajaie" and "Martyr Bahonar" in 6th District of Tehran.

It is probably most noteworthy that the picture shows the recently assissinated general among the founders of Islam and Shiism, the founder of 'modern' day Islamic Iran and lots of recent heroes, clad in modern clothes.

It is probably not that instructive to really ID all of the individuals here.

But the level of detail suggests, if we want to start this, then from the left the first face is most probably associated with 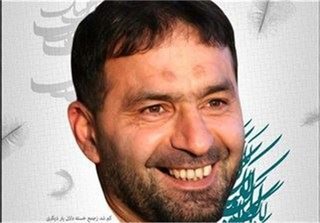 who died in 1984 in Operation Kheibar 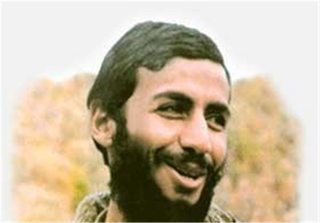 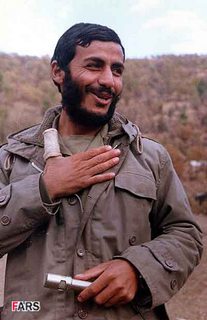 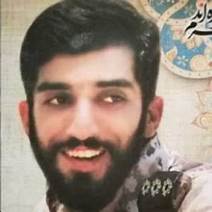 Iranian military officer. He served as an IRGC adviser to the pro-government forces in Syria during the Syrian Civil War. He was captured by ISIS forces near al-Tanf in southeast Syria, and was beheaded two days later. ISIS published a video of his capture, a picture of which went viral among Iranians in social media. The publicized captivity and his following death received widespread reaction among the Iranian people, government, and military. 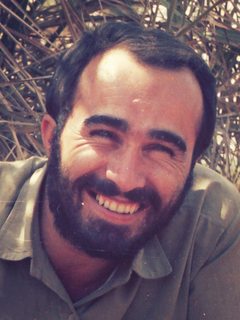 supported Islamic revolution and after its victory, served and helped safeguarding it. He was engaged in many operations during the war, namely Dawn 8, in which he captured troops of Saddam's Republican Guard in al-Faw Peninsula; and in Operation Karbala-5 as the commander of the vanguard forces. Kharrazi was killed by shrapnel from a mortar bomb during Operation Karbala-5. 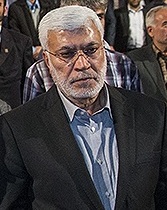 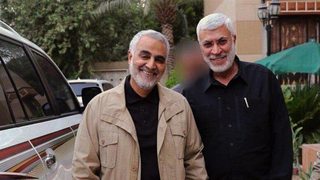 At least he is confirmed, mentioned by name in the article prompting this question (together with Nasrallah und Mughniyeh), and with a special mention in پیام تسلیت رهبر انقلاب در پی شهادت سردار شهید سپهبد قاسم سلیمانی و شهدای همراه او:

Following the testimony of the honorable commander of Islam, martyr Maj. Haj Qassim Suleimani and his accompanying martyrs, especially the great mujahideen of Islam, Mr. Abu Mahdi al-Mohandes, we sent a message. The website of the Office of Conservation and Publication of the Works of His Holiness Ayatollah Ali Khamenei publishes the following text:

The great and glorious commander of heavenly Islam became. Last night, the ghosts of the martyrs embraced the spirit of Qasem Suleimani. Years of sincere and courageous struggle on the battlefields of demons and the secrets of the universe, and years of longing for martyrdom in the cause of God, eventually brought dear Suleiman to this high position, and his pure blood was poured out on earth by the weakest of human beings. I congratulate this great martyrdom before the Prophet Baqiyatallah, on his merciful spirit and extend his condolences to the Iranian people. He was a prominent example of the educated people of Islam and the school of Imam Khomeini. He spent all his life in jihad in the cause of God. Witnessing the reward was his unceasing effort all these years, as he went about his divine work and his path would not stop and close, but the vengeance awaiting criminals awaiting their blood on his blood and other martyrs of the incident last night. Are polluted. Martyr Soleimani is the international face of the Resistance, and all the devotees of the Resistance are bloodthirsty. All friends - and all enemies - know that the Jihadist line of resistance will continue to be doubly motivated, and a definite victory awaits the mujahideen this happy way. The lack of our dedicated and dear commander is bitter, but continuing to fight for the ultimate victory will make the killers and criminals even more bitter.

[Wikipedia:] was an Iraqi politician and military commander. At the time of his death, he was deputy chief of the Popular Mobilisation Committee (Al-Hashd Al-Sha'abi). The organisations he oversaw have been reported to have close links to the Quds Force, part of the Armed Forces of the Islamic Republic of Iran.

He was the commander of the Kataib Hezbollah militia, and prior to that worked with the Iranian Islamic Revolutionary Guard Corps against the Saddam Hussein regime.

Allegations of terrorism have been levelled against him over his activities in Kuwait in the 1980s. He was sentenced to death in absentia in 2007 by a court in Kuwait for his involvement in the 1983 Kuwait bombings. Muhandis was on the United States list of designated terrorists. 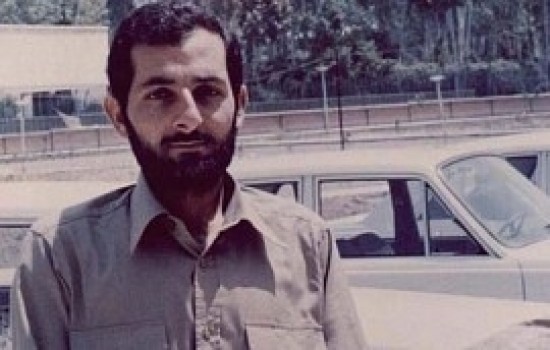 His wedding party was the same day as the start of Iran–Iraq War. He left his family to join the Iranian forces in the battlefront just two days later. He was appointed as the commander of the 31st Ashura Division, and showed great courage and bravery in combat against the Iraqi forces. He was killed in a combat by Iraqi troops in eastern Iraq, March 16, 1985. 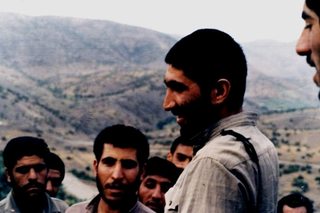 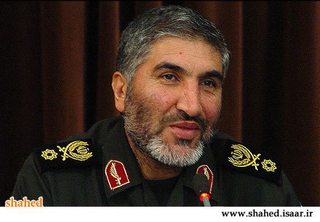 an Iranian commander in the Islamic Revolutionary Guard Corps and one of the most notable commanders in Iran–Iraq War.

He was killed in a falcon plane crash near Urmia. […] Reports that the plane crashed due to sabotage or a bomb are still unproven. 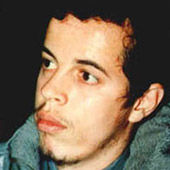 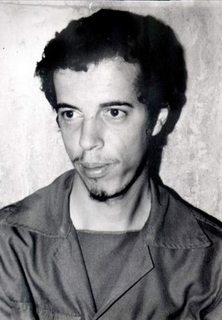 He played an important role as headquarters commander of Nasr and Karballa for success of Iranian forces in Operation Ramadan and Operation Fath ol-Mobin. His role also was significantly important in Operation Beit ol-Moqaddas and The Liberation of Khorramshahr.

He was admitted in Tehran University in law and work for Jomhuri Eslami newspaper as a reporter. Hasan Bagheri was his nickname as he began his activities in the army intelligence department. Major-General Bagheri passed the levels of growth and excellence so quickly that his name was recorded as the Genius and top strategist in the history of the Imposed War.

He was deputy commander of Ground Forces of the Islamic Revolutionary Guard Corps when he was killed. Bagheri was killed at the age of 26, January 29, 1983.

— don't really recognise him — but may be 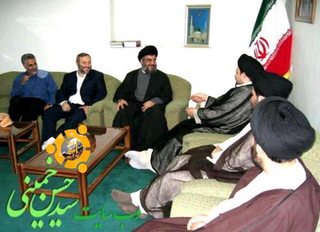 Here with Soleimani, in meeting with Hassan Nasrallah via. The Soleimani Picture Album. Know a Villain by His Friends 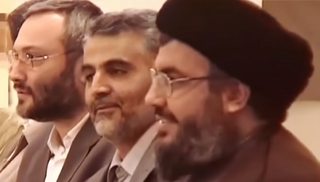 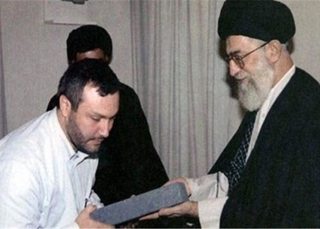 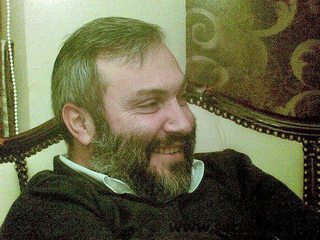 WP: Information about Mughniyeh is limited, but he is believed to have been Hezbollah's Chief of Staff and understood to have overseen Hezbollah's military, intelligence, and security apparatuses. He was one of the main founders of Hezbollah in the 1980s. He has been described as "a brilliant military tactician and very elusive". […] was killed on the night of 12 February 2008 by a car bomb that detonated as he passed by on foot, in the Kafr Sousa neighborhood of Damascus, Syria.

Not only murals throughout the country uphold the memory of these people. Lots of internet pages do so as well. The pictures used are mostly a direct copy from these likenesses.

I won't try to speak for the rest (another answer seems to be putting a lot of work into that), but it appears the green cloaked figures are meant to be representations of Imam Husayn and his family, who are early holy figures in the Shi'a Islam sect prevalent in Iran, also known as the People of the Cloak.

it's from the Iranian traditional passion plays commemorating the 3rd Imam in which the bad guys wore red, and Imam and his family wore green.

So this is meant to show the spiritual founders of Shi'a welcoming him to heaven.

Weddady has an interesting counter-photo (also made by Iranians) implying instead Solemani is being welcomed to hell simply by changing the robe colors from green to red (and photoshopping in other notorious dictators like Castro, Saddam, Khadaffi, Mao, etc.

* - An common acronym expanding to "Middle-East and North Africa"

Not the answer you're looking for? Browse other questions tagged identification iran or ask your own question.