What was the experience level of officers during the American Civil war?

It's common knowledge that the American Civil War was fought by amateur soldiers.

DISCIPLINE & TRAINING OF SOLDIERS Rather than learning in training camp, Civil War regiments had to learn to fight on the battlefield. The training of regiments was lacking and consisted mainly of the manual of arms, little target practice, company and regimental drills in basic maneuvers and brigade drill and skirmishing tactics. Division drill or mock combat was a rare occurrence. Many regiments went into combat only three weeks after being organized.

It is true that you are green, but they are green also; you are all green together.

My question regards the leadership of those soldiers.

When Abraham Lincoln made his initial call for 75,000 troops April 15, 1861 existing laws required him to rely on states to select and provide those troops to the union. Congress had not authorized this call up and the Union treasury could not afford it. So the Union was forced to rely on the States for the troops, supplies, transport and to a large extent leadership of its army.

April 1861-November 1863 Page 9
The Ohio Governor spoke of his embarrassment he felt at every step from the lack of practical military experience in his staff, and of his desire to have one on whom he could properly throw the details of military work.

The answer to the Ohio Governor's request for anybody with military experience was General George McClellan a 1846 graduate of the Military Academy, who was 19 when the Mexican-American War began and 21 when it ended. McClellan had risen to the rank of Captain before resigning his commission in Jan 16, 1857. McClellan would go from Captain in 46, to the Civilian president of a railroad 60 to major general in the Union Army 1861, where he out ranked all but 75 year old, Lt. General Winfield Scott in May of 1861 at the age of 34.

Ulysses S. Grant graduated from West Point in 1843, was a logistics officer at 23 years old when the Mexican-American War began and saw some limited action before it ended. Grant who resigned his commission as a Captain, July 31, 1854 for being drunk on duty. He would end the Civil War in command of all Union Forces but in April 1861, when Lincoln called up his first 75,000 troops was working for his younger brother in the family leather goods business.

Two of the most famous and accomplished Southern cavalry offices of the American Civil War were General Nathan Bedford Forrest and Colonel John Mosby, both of whom started the civil war as enlisted men with no military experience.

My Question:
What was the experience level of officers during the American Civil war?

Gort the Robot:
There are lots of big civil war names with that experience In particular, two you mention, McClellan and Grant, saw real combat experience there. So did Robert E. Lee.

McClellan was 19 when the Mexican American war began( Apr 25, 1846) and 21 when it concluded. He did see "real" combat there, but would you really call him experienced general to lead all of your nations armed forces based upon experience he had when 21 years old?

Grant too saw "real" combat in the Mexican American war. He got into a few calvary charges. But he was still a logistics officer for most of that war. 23 when that war began. Hardly the kind of experience one would claim in making one an experienced General of the Armies. 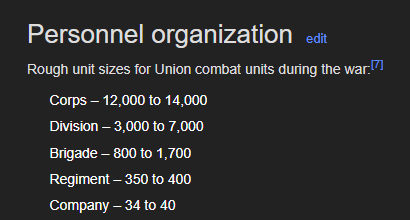 Add on that the officers were split between two warring sides of a few hundred thousand men each, that suffered extensive casualties and had additional staff officer requirements, and one would not be far off to say that the officer corps for both sides was, for practical purposes, nearly 100% amateur. Further, even at the end of the War it is likely that few of the officers had even a full three years experience either in uniform or in combat tour.

By way of comparison, the American Civil War is not even as long as the War of the First Coalition, 1792-1797. That latter saw the recognition of numerous future French military leaders, foremost among them Napoleon, yet most if not all of the future Marshals of France were yet to be promoted past Brigadier General.

I know I'm answering an old post with an already-accepted answer, but there was only one and it missed out on a key feature of the War: Military colleges. The US didn't just have West Point for trained army officers. In the United States before the war, especially in the South, there was a sense that a fight was coming. In the 1840s numerous state military colleges were established which provided students a military education roughly on par with West Point. I say roughly because for the most part West Point did (and still does) focus on engineering, so a graduate of a State military school like VMI might get the same infantry/artillery/cavalry training as a West Point grad, but by and large missed out on the Civil and Military engineering aspects.

In "Seed Corn of the Confederacy" by James Gindlesperger it's stated that at the start of the war trained officers (those that graduated a military college of any sort or had served as an officer in the US Army or foreign army) averaged about 1 per 1000 men. As a Civil war regiment nominally contained 1000 men (though in reality as they weren't reinforced 400 was closer to an accurate average size) you get about 1-2 trained soldiers per regiment. At the start of the war this number favored the south, as their more numerous military colleges provided a larger pool of nominally-trained officers. For example the famed "Stonewall Brigade" at 1st Manassas had a high number of VMI graduates as officers (IIRC something like 30% of the officers captain and above were VMI grads but I'm away from my books so don't take that as gospel). That'd be about 4x the "normal" amount of trained officers in the unit. As the war progressed those numbers evened out as officers were killed and both sides had a crash-course in officer training.

Of course, knowing the proper evolution for company or regimental drill (something you could expect to learn at a military college) and knowing how to run a brigade/division/corps/army are two wildly different things. There were exactly 0 divisions in the US Army when the South seceded. There weren't even brigades, army organization ended at the regiment. Prior to that the Mexican-American war in the 1840s saw the US field an army of 79,000 men. But considering the senior officers on both sides (Lee, Grant, Longstreet, etc) were mostly junior officers and none, IIRC, commanded more than a regiment during that war, the experience of anyone in command of a brigade or higher during the Civil War was nil, and it was all learned more-or-less on the job.