What does this 1960 West German political cartoon mean?

I have recently seen a [caricature][1] in which a blindfolded man goes along a cliff. The caption was "The German citizen in the 1960's". I thought it may have something to do with the economy, but in the 50's the economy in Germany was actually very good, so, any ideas? Why is it exactly in the year 1960 and what is the background? 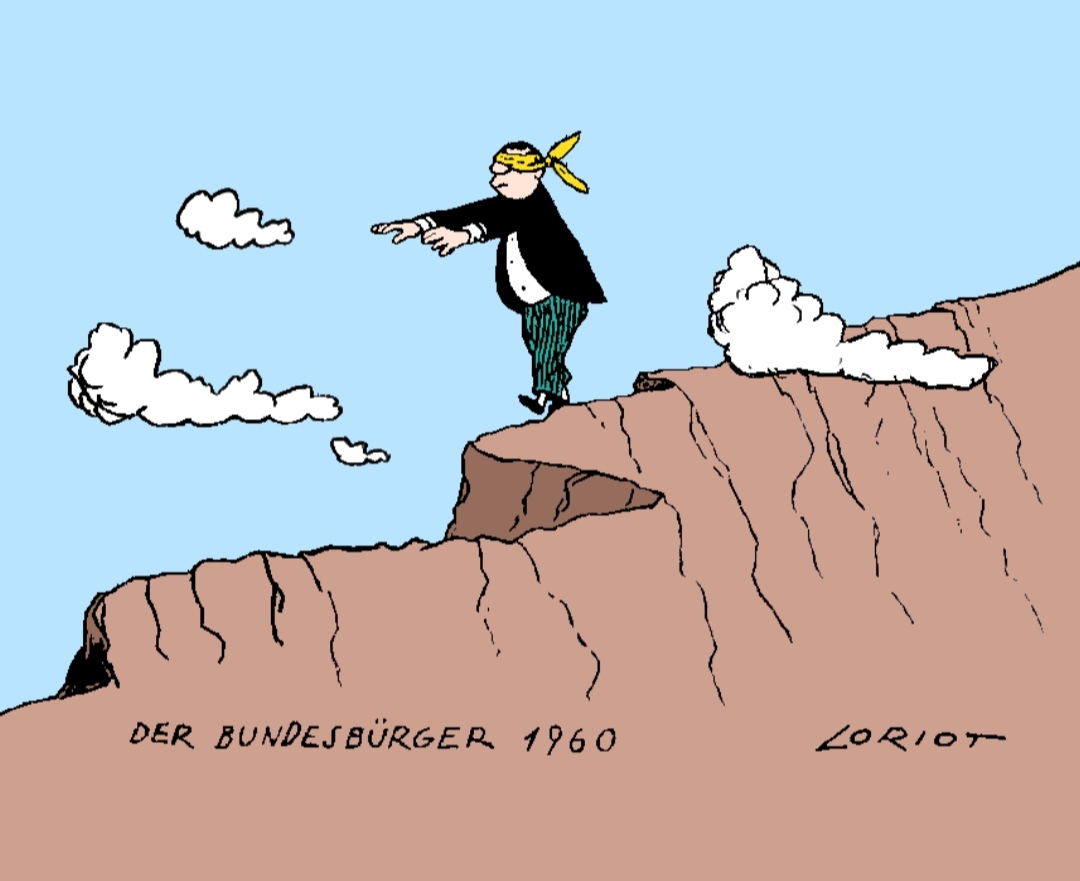 This a caricature (05:30) bei Vicco von Bülow, pen name Loriot. The title says "Bundesbürger 1960", and means 'West-German citizen 1960'. This man makes a Gratwanderung blindfolded. Gratwanderung being an idiom, meaning not only alpine hiking, but also being in a precarious situation, in which no deviations are 'advisable', if not incredibly dangerous.

But in most of his work, no special political event is picked up upon. He was more of a chronicler of the humorous absurdities of life.

If one really wants to go down into exegesis of a cartoon: the West-German citizen is (again) up high, amidst the clouds, in terms of political re-recognition, economic recovery after the war, being now democratised citizen, etc. But this middle to upper class citizen is inexperienced in being such a creature, hence the blindfolds as this doesn't come naturally to him, and is more like tightrope walking. That's only one interpretation.

As already commented below the question, and equally likely:

To me, it indicates that the German citizen was proceeding blindly along a precipice. The implication is that there was no strategy, no vision, no fundamental direction. — Mark C. Wallace

But I highly doubt there will ever be one, correct. Equally possible is a simple reading of "awwh, these modern days…"

The works he published in those years are "Loriot lies true stories" 1959 and "In case of…" 1960. Both roughly as current events political like Gary Larson.

The latter seems to be the book this cartoon is published in. It had the subtitle: "The modern helper in difficult situations" and is now advertised with:

In this epoch-making book, Loriot pointed out that "not only the faulty hibernation of sensitive garden gnomes has always been a problem that has caused many marriages to fail prematurely. It was also clear that, apart from this quite ordinary case, there would have to be a number of other questions which, although less well known, would be no less important.

The backside of this book has a similar cartoon: 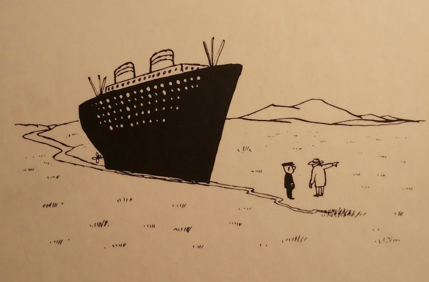 While an easter egg is revealed when one removes the cover: 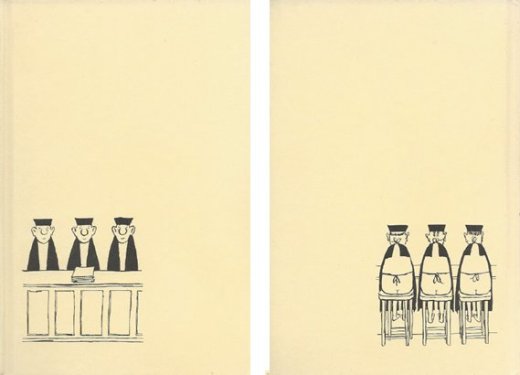 It's worth remembering that "walking along the edge of a precipice" was a fairly common trope throughout the Cold War, but especially from the late 1950s. — sempaiscuba

That is on the hand quite true. As for the broad general background. But then it is particularly noteworthy that in this case the artist is seldom interested in global political observations. His takes on nuclear power for example look like an all ou attack on the dangers of said technology. But it is more the salient features of how people deal with such absurdities that he analyses. One of the arguably more political cartoons of him shows this: 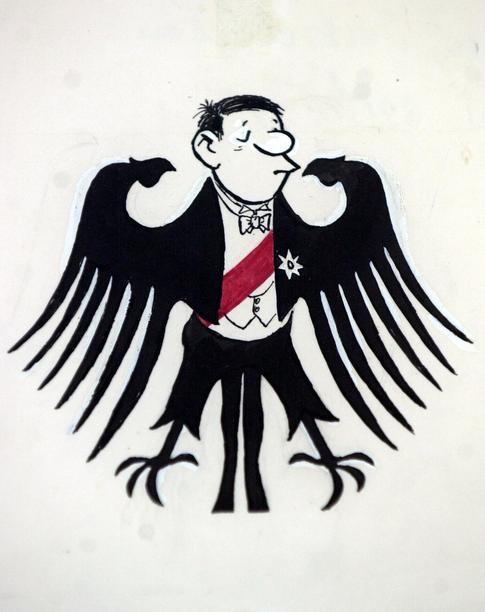 A potato nose man clad in a federal eagle — and pathos. Wearing a medal, probably a civilian order. Very 'stately making'. That seems to be the most important feature of the cartoon in question: It is the West-German citizen, quite individualised, the year seemingly almost superfluous.

The West German citizen must plot an exact but wandering course of left and right deviations or fall off a precipice.

West Germany while nominally a democracy had extreme restrictions on left wing political organisation combined with a failed de-Nazification that barely acknowledged mass killing of non-combatants in Europe in the 1940s. Moreover, West Germany was wedged between “right” wing powers such as France, the United Kingdom and the United States all of whom had a political interest in BRD remaining right wing, while seeking to prevent Bonn Germany becoming non-parliamentary right wing. Correspondingly a large bloc, dominated by the Soviet Union, feared a right wing Germany or a puissant Germany and sought to keep West Germany locked into certain behaviours, some of which could be called left. A latent incapacity for Bonn institutions to express ultraleft sentiment meant that West Germany students and young workers were building organisations and apparatus which would, for example, oppose the American war against the Vietnamese people, or fund and execute the exploding of bombs and shooting of civilians by the end of the decade.

In this situation the burger, the comfortable city dwelling bourgeois minded middle class member is blind to the realities of the left right movement of policy and to the cliff of the KAPD and NSDAP: of revolution and reaction; on which they blithely wander.

One false move and the Bonn republic falls.

Not the answer you're looking for? Browse other questions tagged economy germany 1960s or ask your own question.

18
Have Germany and Poland ever signed a peace treaty after WWII?
8
Why did Empress Elizabeth and Catherine the Great of Russia have such different policies toward Frederick the Great?
12
Why wasn't the Free City of Lübeck ever restored?
1
Quantifying economic mobilization?
8
What is the original German version of Bismarck's phrase about intentions and capabilities?
7
Was there a contemporary understanding that 1706 was an exceptionally poor year?
3
Was a drop in standards of living a significant factor in the revolutions of 1848?