Was there intermixing between Brits and Hong Kongers during Britain's control of the territory?

When Britain took control of Hong Kong at the end of the First Opium War did British Europeans stay and intermix (intermix=make new humans)?

Was there intermixing between Brits and Hong Kongers during Britain's control of the territory?

In her book Eurasians, MIT professor [Emma J. Teng] contrasts attitudes towards interracial marriage in three jurisdictions, and how mixed-race families in Hong Kong were able to grow wealthy despite facing discrimination

As a colonial entrepôt, Hong Kong was a place of meeting and acculturation. Eurasians, being the biological issue of those exchanges, have been a part of Hong Kong life since the colony’s foundation.

Hong Kong’s formative years were shaped by the great Eurasian comprador clans like the Hutongs and the Kotewalls, whose names are now immortalised by the very urban geography of Hong Kong.

Of course many of these are more European than British but it shows that relationships and intermarriage between Europeans/British and Chinese people did happen in the colonial era.

Eurasians and couples with differing ethnicity faced disapproval and discrimination from both Chinese and European communities, so may not have been especially numerous during colonial times.

The fabled sign "No dogs and Chinese allowed" is a film prop from the Bruce Lee fictional film "Fists of Fury" in 1972.

Some say the sign existed in Shanghai, not Hong Kong. 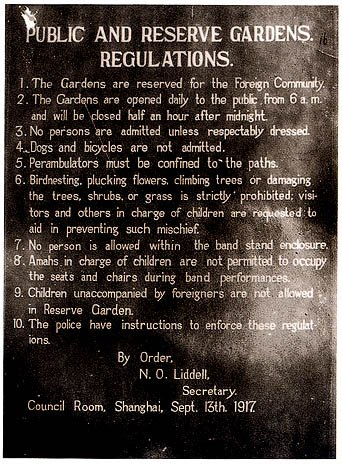 This article examines the potency and persistence of myth and language in the context of the dispute, now over 80 years old, about the officially-sanctioned wording of regulations in the municipal parks of foreign-administered Shanghai. Specifically, it examines the potent symbol of the sign placed in Shanghai's Huangpu Park that allegedly read: “Chinese and Dogs Not Admitted.” This symbol has secured a totemic position in the historiography of the Western presence in China before 1949 and is deeply embedded in contemporary Chinese and Western perceptions and representations of that era, and of the whole question of Western imperialism in China. It is the subject both of popular discourse and official fiat in China today. Drawing on a series of revisionist writings and new archival research this article shows that the true facts of the case are both beyond dispute and irrelevant, but that the legend survives undiminished.

There was racism and discrimination in Hong Kong, for example only Europeans being allowed to own property in some areas (e.g. the peak) between 1904 and 1946. Unequal treatment in law etc.

This did not preclude intermarriage in the colony more generally.

No. At least not in the "early" going.

My father was born in Hong Kong in 1923, and he still remembers signs on public buildings that read, "Dogs and Chinese not allowed."

The British wanted to avoid every possible contact with the locals (except as "servants.")

11
Chiang's allies were "a kidnapper, a hooligan and a bully" but which was which?
6
Was there anyone involved in the negotiations of New Territories (Hong Kong) lease still alive at the time of the negotiations of its return to China?
11
Why did the British take Hong Kong instead of any other of the later treaty ports?
2
Why weren't the New Territories ceded to the British instead of leased in 1898?
11
Why did the British think a 99-year lease on Hong Kong's New Territories was "as good as forever"?
3
After the First Opium war, Why didn't Britain demand large amounts of territory from China?