Is it true that Christian English monks adopted Norse hairstyles before the start of the Viking age?

I remember a documentary suggesting that Vikings traded a lot with English monks, before the Viking Age started, and that the monks ended up adopting their hairstyles. They mentioned a senior monk or bishop complained against them doing this. This supposedly happened before the raid at Lindisfarne.

I can't find anything about this, and don't remember what documentary it was from. Does anyone know if this happened?

Question:
Is it true that Christian English monks adopted Norse hairstyles before the start of the Viking age?

Short Answer
Not monks but nobles. Not before Lindisfarne but just after.

Yes, it's true Vikings (Norsemen) traveled to Britain before the age of Vikings and Lindisfarne (June 8, 793). Anglo Saxons who invaded the British Islands after the Roman Period came to an end, beginning around 410, were Norsemen.

Alternate Answer
In 796, 3 years after Lindisfarne, an Anglo-Saxon monk named Alcuin wrote a letter to King Aethelred of Northumbria. Alcuin admonished king Aethelred for several things, including that the King and his nobles had copied the hairstyles and dress of the Vikings that were invading their islands and raping and pillaging their villages.

Letter from the Monk Alcuin to Ethelred, king of Northumbria (796 AD)
Consider the dress, the way of wearing the hair, the luxurious habits of the princes and people. Look at your trimming of beard and hair, in which you have wished to resemble the pagans. Are you not menaced by terror of them whose fashion you wished to follow?

Is that what you are thinking of? That's as close as I could find to support your memory.

Detailed Answer
The hairstyle is called tonsure. Vikings didn't do tonsure. Most people in the middle ages wore their hair long. Vikings had many hairstyles but none of them looked like monks. Monks wore their hair short so as to stand apart. They even cut a bald patch on the top of their heads for this purpose. Nobody really knows where that tradition comes from but it does predate the age of vikings and Lindisfarne. One theory is it was done to emulate Jesus and his disciples. Another speaks to it as a rejection of worldly concerns; a monastic crown.

Why do monks have shaved heads?
The act of shaving one’s hair on the scalp is known as tonsure and it has been associated with a multitude of religions through history. One theory is that it can be traced back to Jesus’s disciples, who practiced the art of tonsure on their own hair, which monks wish to imitate. Another idea concerning monks being the disciples of God is the ancient custom of shaving the heads of male slaves. Male monks then shaved their heads in kind to indicate their status as “slaves of Christ.” The narrow crown of hair also evokes images of the crown of thrones placed on Christ during his crucifixion.

Sometimes referred to as the ‘monastic crown’, the haircut has come to symbolise religious devotion and the rejection of worldly possessions.

Vikings didn't do tonsure. Viking haircuts encompassed many different styles, including braids, ponytails, shaved back and sides, mohawks, undercut, and epic beards sometimes the beard was braided, but no tonsure. No bowl cuts, no bald patch at the top.

Middle Ages Hairstyles
All Medieval monks in the Middle Ages were clean shaven. They were distinguished by their partly shaven hair called tonsures. Their hair was shaved except for a narrow strip round the head. Tonsures were a symbol of their renunciation of worldly fashion and esteem. A tonsure might also indicate that a monk had received clerical status.

I believe your question, or at least the documentary you are referencing, may be referring to a much later event. The 'complaint' you mention is found in a letter from Ælfric of Eynsham to an individual identified as 'brother Edward', and details three different behaviors the Abbot finds distressing; eating blood, assuming Danish customs, and eating on the toilet. Seems like a perfect fit to your question, except this takes place a couple hundred years later, with the letter being dated to about 1005-1010 CE.

1005 is the other certain date we have for Ælfric, when he left Cerne for nobleman Æthelmær's new monastery in Eynsham, a long eighty-five-mile journey inland in the direction of Oxford. Here he lived out his life as Eynsham's first abbot, from 1005 until his death. After his elevation, he wrote his Letter to the Monks of Eynsham, an abridgment for his own monks of Æthelwold's De consuetudine monachorum, adapted to their rudimentary ideas of monastic life;

An excellent analysis of the Letter to Brother Edward, can be found in a transcript of an article which appeared in the Old English Newsletter. From the section discussing the haircut (emphasis mine):

The second section of the Letter deals with English men adopting Danish customs. Ælfric considers this shameful, and says that, according to books, anyone who practises the customs of heathen people and dishonors his own kindred by doing so will be cursed. He object in particular to those who tysliað eow on Denisc, ableredum hneccan and ablendum eagum. Tyslian is a rare word which means 'to dress'; ablered is otherwise unattested, but is connected to the word blere 'bald' by Bosworth and Toller and the Dictionary of Old English, and apparently means 'bare of hair'. The passage refers to Englishmen adopting a Danish style of haircut.

Note that though the letter is from the Abbot to a 'brother edward', at least this article's interpretation of the meaning of the section of the letter is referring to the behavior 'of Englishmen', not directly referencing the monks themselves.

The Alcuin letter is also discussed here as a reference Aelfric may have been familiar with. Another section of this article goes on to expand upon what exact hairstyle may have been meant, and brings up Saxon styles which was queried about in comments:

Neither Alcuin, the papal legates, not Wulfstan's Canon specifies which particular heathen fashion is indicated, but Ælfric's phrase ableredum hneccan and ablendum eagum 'with bared necks and blinded eyes', is very specific. It suggest a long fringe or bangs in front, and very short or shaved hair exposing the neck in back. This was very different from the way Anglo-Saxon men normally wore their hair. According to Gale Owen-Crocker's authoritative survey of Anglo-Saxon dress, Anglo-Saxon men of the tenth and eleventh centuries would usually have worn their hair short, and were commonly clean-shaven or had closely cropped beards, though kings are generally shown with moustaches and full beards. [29]

Even though we have no visual reference for the time, the Norman invasion of England is just a few years away. The Bayeux Tapestry is often referenced for its depiction of the Normans, particularly interesting is the hairstyle: 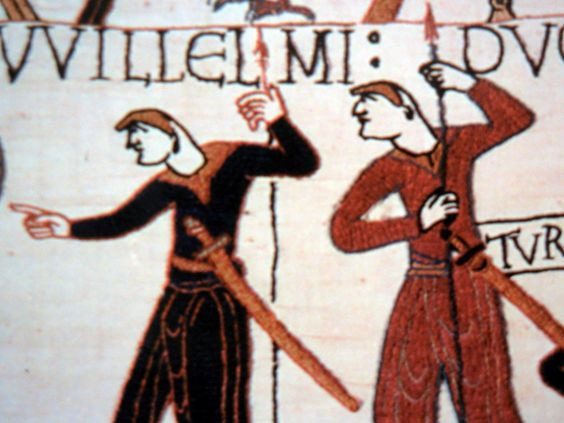 Note the bare neck, and the bangs depicted in front of the eyes. (The above OEN article also explains the connections between the Normans and the Danes, if you are unclear on that connection.)

So , a complaint by Aeflric to Brother Edward concerning Danish hairstyles certainly exists, but the timing is much later then the attack on Lindisfarne, and it probably wasn't referring to behavior of the monks themselves. This is still likely, in my opinion, to be the source of the information you recall.

Not the answer you're looking for? Browse other questions tagged england christianity vikings fashion or ask your own question.

8
Is this true that the requirement to sacrifice to the Roman gods was put in by the Caesar only after Christianity emerged?
4
Why is Kubb - a skittles game - associated with the Viking Age?