What is the original source of this 16th century image of a French town holiday with musicians in a tree?

Several sites have this image below but none give any information about the original source. 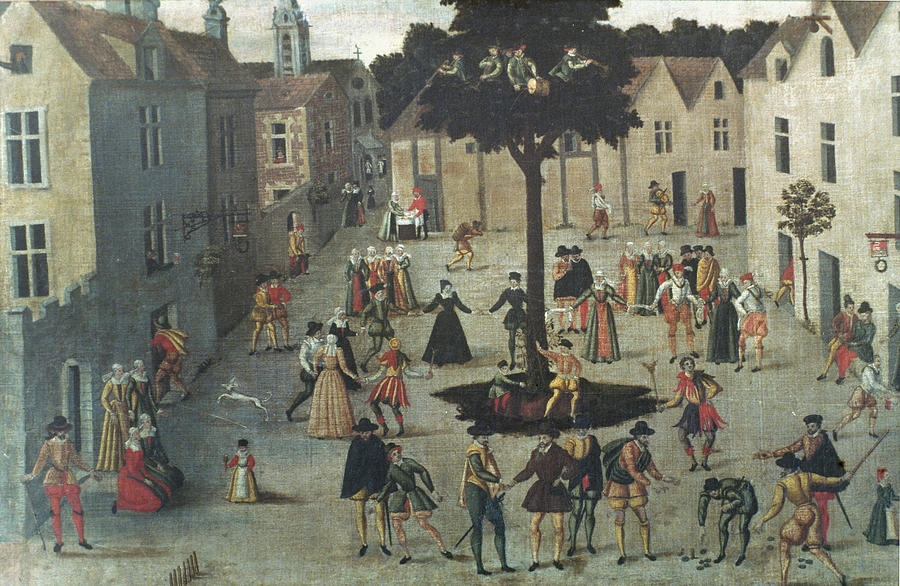 Image source: fineartamerica. The same image can also be found at Granger and (on various items such as towels and mugs) at Pixels.

The only available information is:

a form of ground billiards, using one or more balls, a stick with a mallet-like head

What is the original source of this image?

I'm also curious about the musicians in the tree and have not been able to find any other such depictions, from either the Early Modern or Medieval periods. Knowing the original source of the image above might throw some light on this.

Was this just a bit of artistic license or was it not unusual to have some of the musicians up a tree (assuming there was a 'serviceable' one in the vicinity), or perhaps it was a regional 'tradition'? Examples (images or written accounts) from Medieval or Early Modern times would be acceptable.

I have an initial clue, which may just add to the mystery. Looking for a source, I included medieval woodcut in my search and came up with this image: 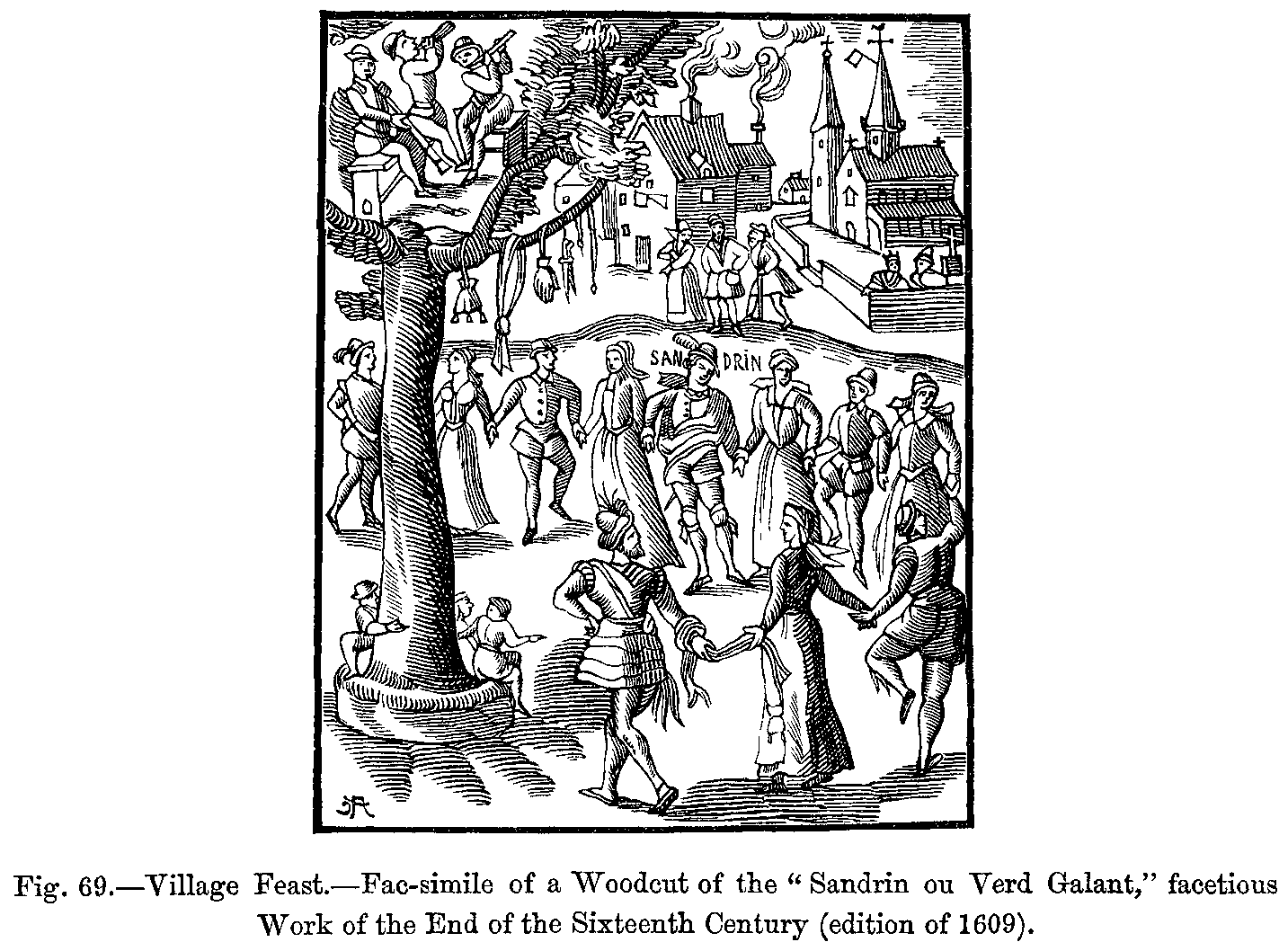 If you do an image search for this, you will find it credited as '19th century fac-simile of a 16th century woodcut'. Indeed, the wikimedia page lists a source as a 19th century book,

Source Paul Lacroix, Manners, Custom and Dress During the Middle Ages and During the Renaissance Period

in which we can find the above image on page 101 in the chapter Castles, Towns, and Rural Districts.

Since Sandrin appears to be a person labelled on the image, this may indicate it is referring to the 16th century composer, Pierre Regnault Sandrin.

@kimchi lover brought up a link in comments to a 19th century reprint of the 1609 original mentioned in the images caption "Sandrin ou Verd Galant". The woodcut is actually used several times within, with varying captions. This would indicate the woodcut is depicting the character Sandrin and not some historical performance by the composer Pierre Regnault.

A little more digging on the composer brought up a bit of info at Oxford Music Online concerning the association of the name Sandrin with the composer Pierre Regnault (emphasis mine):

French composer. Pierre Regnault, like his brothers and his sister, apparently took his sobriquet from a late-15th-century farce, Le savetier qui ne respont que chansons, in which a cobbler named Sandrin answers every question put to him by singing a chanson incipit.

Of interest may be this work, Le savetier qui ne respont que chansons, which I found behind yet another subscription/paywall at Cambridge University (where farce is actually included in the title):

Going through "Sandrin ou Verd Galant" to look for clues, I found what may be the relevant passage from page 62:

...and to get a translation from Google still leaves some confusion but does offer some enlightenment as well (emphasis mine):

Being dictated, let us go out into the place, where high up Verdissant rises a waggly blagard on the elm of the carfour, which the valleys of feste Had made it draw up, to make the place more honest, and to house the players of instrument, A so that they are comfortable and more convenient.

The term eschaffaut (which somehow gets translated as waggly) seems to indicate some form of scaffolding (échafaud) on the elm tree. (If anyone with the fluency in French I lack would like to clear up the translation of this paragraph, it would be welcomed.)

A couple of other items from the book.

There is an earlier edition of the story mentioned from 1583, which gives us an earlier date to compare with the OPs painting if any more information comes to light concerning it. Another note item of interest is that The OPs unknown painting is listed as depicting the dance known as a farandole, but that particular word does not occur in the Verd Galant. The term bransle is, however, used in reference to the dance on several occasions (pgs 67,69,113,117). This, I assume, refers to the Branle. Following a link from the wiki page on the farendole, a page on Traditional music from County of Nice (France) says this concerning a connection between the farendole and the branle:

If the text of Verd Galant is actually describing the branle, the predecessor of the farendole, this may speak to the probability that scene depicted in the book predates the OPs painting, which shows a later dance style.

It is obvious that the painting and the woodcut are related, but we need more details to determine which may be derivative of the other.

Not the answer you're looking for? Browse other questions tagged france identification art early-modern or ask your own question.

24
What is this military patch with the silhouette of a pegasus on it?
3
What was the judicial body in 16th century France called?
14
What is the flag in this 17th century painting?
2
What is the story of this image?
2
What was the impact of race in the French Foreign Legion in the 20th century?
8
What are these items in this 16th century plan of an English town?
22
Who are the three men standing and what are they holding at this University of Paris Doctors' Meeting?
33
What is the date and original source of this medieval picture?
4
What is the name of this hat and the function of those wearing them (worn by Nansouty's French Guard cavalry)?