When did Europeans stop writing the month with Roman numbers?

I got an old wall clock. I'm not at all a clock expert and I would like to know more about its real age.

It has a date engraved in its wood: 18/III 07. I assume that this is finishing-date and 18 is the day and III is the month. Now the 07 is most likely 1907, or maybe it is 1807. I assume the clock has its origin in central Europe. Germany, Austria or France, maybe Switzerland.

When did people stop, in let's say in Germany and France, to write dates with Roman month numbers?

UPDATE 2013-01-12 (or 12/I 2013 ;-) ): After having the (real-life)-feedback of a knowing person: The watch might be from the early 19th century regarding the clockwork mechanics (wooden plates are keeping the gears in place, instead of metal plates as done in newer clockworks). The date is most likely not the construction date, but a repair date as it can be found regularly. So 1907 is the most likely.

People all over Europe still customarily use Roman numerals to write months, whatever ISO standards say.

What may be of interest to you I've tried to find an example of such format, including the unusual single slash. It did not seem German-like (they usually prefer dots over slashes), but I've found letters from Marc Chagall http://books.google.com/books?id=WXI6K9vPLfkC&pg=PA347 that use 28/XII 928 to refer to 28 December 1928. Looks similar to your date.

It depends on the country and language. In France, the abandonment of Roman numerals for months in dates was gradual over the 20th century (and is still not completely over in specialized contexts).

In postmarks, Arabic numerals started replacing Roman numerals in months after 1945 and the replacement took at least until the late 1950s. This replacement was gradual, as machines were replaced. Lulu on https://web.archive.org/web/20211012172349/https://fr.rec.philatelie.narkive.com/XTQGv087/quelle-machine cites one particular brand of machine switching to Arabic numerals in 1949, and Arabic numerals becoming the rule (for this type of machine, if I understand correctly) in 1954. https://www.histoire-et-philatelie.fr/pages/003_politique_interieure/02_quatrieme_rep/04_transitions.html cites some examples with the month in Roman numeral as late as 1959. As stamping machines were sold internationally, there was likely a transition at roughly similar dates in many other countries. I do notice that Canadian postal regulations permitted two formats, one using Arabic numeral for the month and one using Roman numerals, at least until 2010 (the 2010 update of this regulation no longer specifies date formats).

Growing up in France in the 1980s, I was never taught to write the month in Roman numerals, and I only ever remember seeing this in one document: railway schedules. The official railway schedule published by the French railway operator (SNCF) used Roman numerals for months, as far as I remember, until it was discontinued in 2008. A 1995 example is online (e.g. note 10 on page 9 of the PDF: “sauf les 6 VI, 15 VII et 16 VIII” means “except on June 6th, July 15th and August 16th”). Other railway schedules around the same period either spelled out month names or used Arabic numerals. In particular, the privately published Chaix which preceded the SNCF-run schedule used full or abbreviated names (“JUILLET” but “SEPT.”) (1956 example.

Rare anecdotal evidence suggests that a small minority of French people still used Roman numerals for months, for example a 2021 forum post complaining that a cheque with the month in Roman numerals was rejected. A 2019 Twitter post about a postcard written in 1987 expresses surprise that the month was written in Roman numerals. In a series of 2021 articles about a museum discontinuing the use of Roman numerals in other contexts (years, centuries, monarchs) 1 2 3 4, I found many complaints about breaking the traditions, youth these days know nothing, education not doing its job, and all kinds of complaints you can expect when something changes — but none (that I could find) were complaining about people using Arabic numerals for months, showing that even traditionalists have forgotten that it used to be a thing.

First of all, there probably still are clocks made with Roman numerals or what not these days. The thing is, there's no law specifying that people have to make or not make clocks with Roman numerals. The best one can do is estimate when doing such a thing began to go out of fashion. For example, here is a link of a 1903 clock using Roman Numerals.

However, this link appears to be the best source I can find, and it indicates that Arabic Numerals have been commonly used as the hour even since the 1800s. However, this is only the case with longcase clocks (grandfather clocks), and is probably not your wall clock. If you visit the main page of the site, and click on the clocks tab, it lets you see various older clocks. Just glancing at them, one can see the majority of them use Roman Numerals.

If one visits the Wikipedia page on Arabic Numerals, it is quite clear that clocks using Arabic Numerals have existed since the 1500s, but again, there is no authoritative evidence that by x year, people started mostly using Arabic Numerals. However, I would say that it's a safe bet to say that most clocks began to transition into Arabic Numerals by the 1900s. On the other hand, you are asking for clock dates, which is rather more specific and narrow, and I could not find an answer to such. My guess, (as that's all I can find,) would be a similar time period, in the 1900s.

In conclusion, or read this if you're too lazy to read the rest, I think that the year that the Roman numeral clock dates started going out of fashion would be approximately the 1900s. However, there is not one authoritative source on this information, so this is mostly based on information on clock numbers.

However, this link would suggest that they are still being used today on clocks and dates etc. Since this source is slightly more credible than WikiAnswers, I will go with this. The Wikipedia article also suggests this, stating that

In the 14th century, Roman numerals were largely abandoned in favor of Arabic numerals; however, they are still used to this day for things such as numbered lists or outlines, clock faces, numbering of pages preceding the main body of a book, successive political leaders or people with identical names, chords in music, some copyright dates, and the numbering of certain annual events.

Thus, Roman numerals are still in use today, although not commonly.

The use of Roman numerals to designate months is still being used by some in Europe. The group photograph of the 2022 NATO members has the date 29-30 VI 2022 in the backdrop. 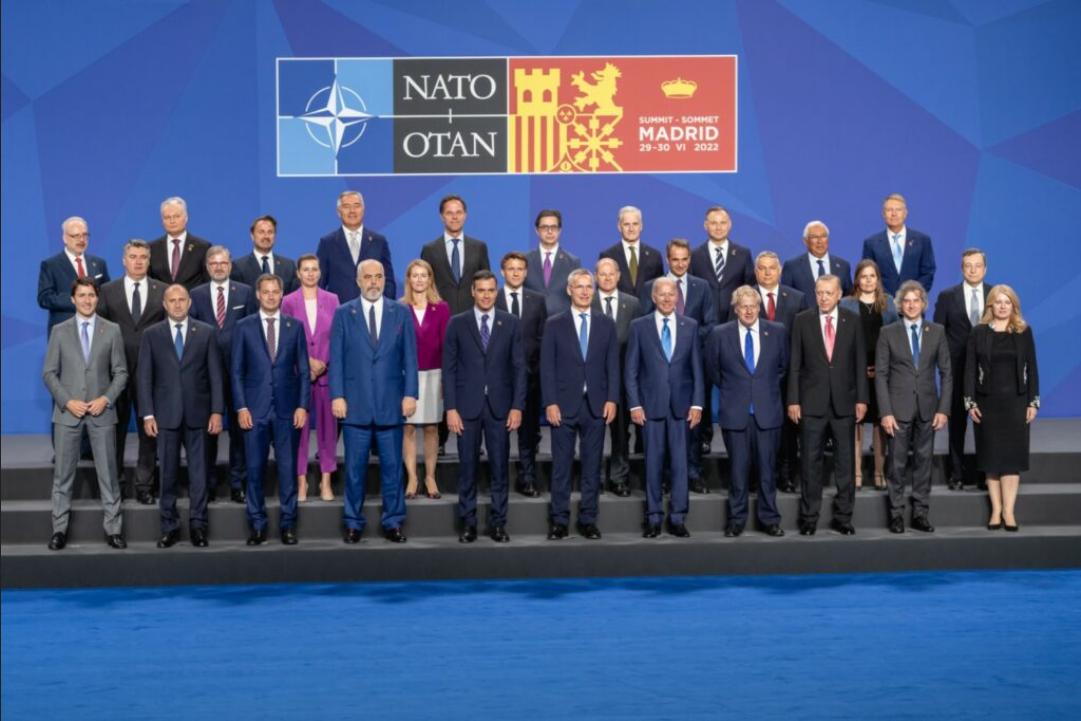 Not the answer you're looking for? Browse other questions tagged europe cultural-history or ask your own question.

20
When did the cats versus dogs rivalry begin in the US?
3
When did ancient religions start to experience dropping numbers of adherents in Europe?
6
When, where and with what propagation through Europe did the idea of gypsies stealing children occur?
8
Did the division between East and West Germany coincide with cultural boundaries?
49
Why did Europe not see Roman-era numbers of men participating in battles until the 17th century?
40
When and why did having long hair become associated with women, and short hair with men?
1
When did the first electronic body modifications take place?
1
Why did the Capetian kings of France come into conflict with the Roman church?
5
When did medieval monarchs start being depicted with ermine fur garments?