Did the Germans consider an amphibious landing for Fall Blau?

In the operation Fall Blau (Case Blue) the German Wehrmacht advanced towards the Don river, and then sent Army Group A into the Caucasus region to take the oil fields in the region.

They managed to take Maikop, yet the Soviets destroyed the production facilities.

If we look at the map below, we see the successive stages of the operation. However, I am asking myself whether it would have been possible to land forces on the eastern coast of the Sea of Azov? This would have given the defenders much less time to destroy oil production facilities.

Has there been any discussion in the German Wehrmacht leadership about an amphibious component for the Fall Blau?
Taking a port at the coast of the Sea of Azov may even helped the dire logistical situation of Army Groups A and B, or was the Black Sea off-limits for German shipping? 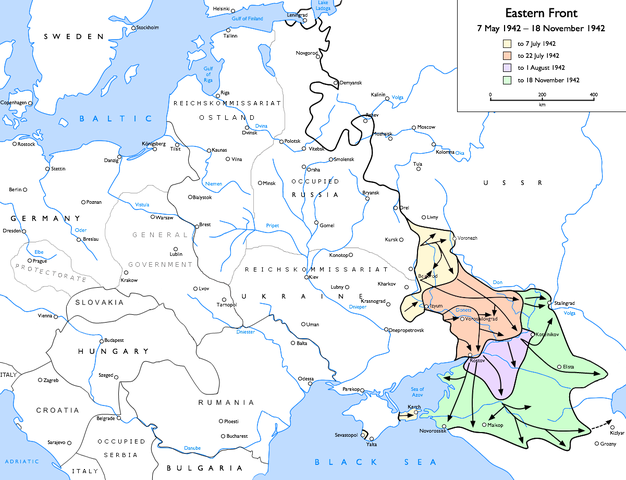 German Plans for amphibious landings in the Black Sea at Taman and Tuapse in support of Fall Blau in 1942.

Kriegsmarine Marinefährprahme (MFP) in the Black Sea.
(from Kriegsmarine: The Forgotten Service) 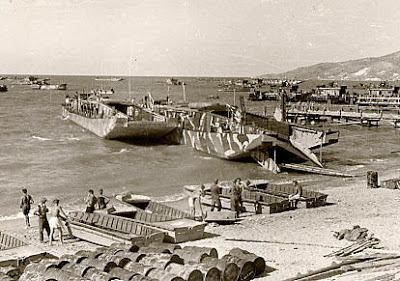 Fuhrer Directive 43, issued on 11th July 1942, which detailed Plan BLUCHER, the proposed operations of the German 11th Army in crossing the Kerch Strait from the Crimea into the Caucasus, contains some information about proposed German landings and naval activity along the Black Sea coast.

The operation will be executed on the following lines:

In accordance with the proposals of 11th Army, the crossing is to be planned so that the strongest possible forces are landed in the rear of enemy coast defenses.

After that, the operation will continue to the north of the Caucasus, its main thrust in a general easterly direction. In this connection it is especially important that the Maykop area be quickly occupied.

The decision whether small forces should also be landed on the coast road along the Black Sea in the Tuapse area can only later be taken.

The Navy will take immediate steps to secure the necessary shipping for the crossing, in accordance with detailed Army requirements.

To meet this need , suitable shipping, apart from vessels already available in the Black Sea and the Sea of Azov and those which may be brought in for the operation, will be chartered or bought from the Bulgarians and Rumanians.

During the actual operation, the Navy will support the landing forces during the crossing, and protect them with all available means against action by enemy sea forces.

Naval units detailed to cover the crossing of the landing forces will come under command of 11th Army during the operation.

The task of the airforce in preparing the operation is the overall elimination of enemy naval forces and harbours in the Black Sea.

During the operation its task, apart from immediate support of the landing forces, will be be to prevent enemy naval forces from interfering with the crossing.

Preparations are to be made so that the Army forces landed on the Temryuk Peninsula may be supplied for several days by air.

The possibility of using parachute and airborne troops is to be investigated. If possible, the 7th Airborne Division will not be involved in these operations, or at least only in small part. It may be advantageous to employ units of 22nd Infantry Division as airborne troops.

Other Fuhrer Directives from that year also offer some insight into planned German naval activity in association with the 1942 Fall Blau offensive:

In the Black Sea it is the principle duty of the Navy, in so far as our combat and escort forces and our tonnage allow, to assist in supplying the Army and Airforce by sea.

Because the battle potential of the Russian Black Sea fleet is still unbroken it is particularly important that the light naval forces to be moved to the Black Sea should be ready for action there as soon as possible.

It will be the task of the Navy, besides giving direct support to the Army in the crossing of the Kerch Straits, to harass enemy sea action against our coastal operations with all the forces available in the Black Sea.

To facilitate Army supply, some naval ferries will be brought through the Kerch Straits to the Don, as soon as possible.

In addition, Commander-in-Chief Navy will make preparation for transferring light forces to the Caspian Sea to harass enemy shipping (oil tankers and communications with the Anglo-Saxons in Iran).

From We March Against England: Operation Sea Lion, 1940–41, by Robert Forczyk, Chapter 11: Hidden Benefits of Sea Lion: Germany Gains an Amphibious Capability for other Theatres, we can see that Operation BLUCHER was executed in a limited form, known as Operation BLUCHER II, on the night of 1/2 September 1942. The other proposed amphibious landing around Tuapse was never deemed viable under the prevailing operational circumstances.

"As German forces surged across the Ukraine in 1941, the Kriegsmarine realized that they needed an amphibious capability in the Black Sea as well. In November 1941, the 1. Landungs-Flottille was formed at the port of Varna in Bulgaria. A facility was established in Vienna to fabricate MFP components and they were sent down the River Danube to be assembled at Varna. By the time that the German 11. Armee began its final offensive to reduce the Soviet fortress of Sevastopol in the Crimea in June 1942, the Kriegsmarine had enough MFPs available in the Black Sea to provide logistical support to the army. After the fall of Sevastopol, the Kriegsmarine began planning an amphibious operation known as Operation BLUCHER II to cross the Kerch Straits and thereby support the invasion of the Caucasus. On the night of the 1/2 September 1942, the 1. Landungs-Flottille, equipped with 24 MFPs, carried a kampfgruppe from the 46. Infanterie-Division across the straits to the Taman Peninsula. Operation BLUCHER II was a low-key success, which helped to accelerate the German drive into the Kuban." (pp. 295-296)

The Germans continued to increase their amphibious capabilities in the Black Sea throughout 1942-43 up to a total of four amphibious flotillas consisting of 70 MFPs and several Siebel ferries, which successfully evacuated over 200,000 men from the Kuban to the Crimea in September 1943.

Map showing the progress of Fall Blau in the Caucasus and Black Sea region. 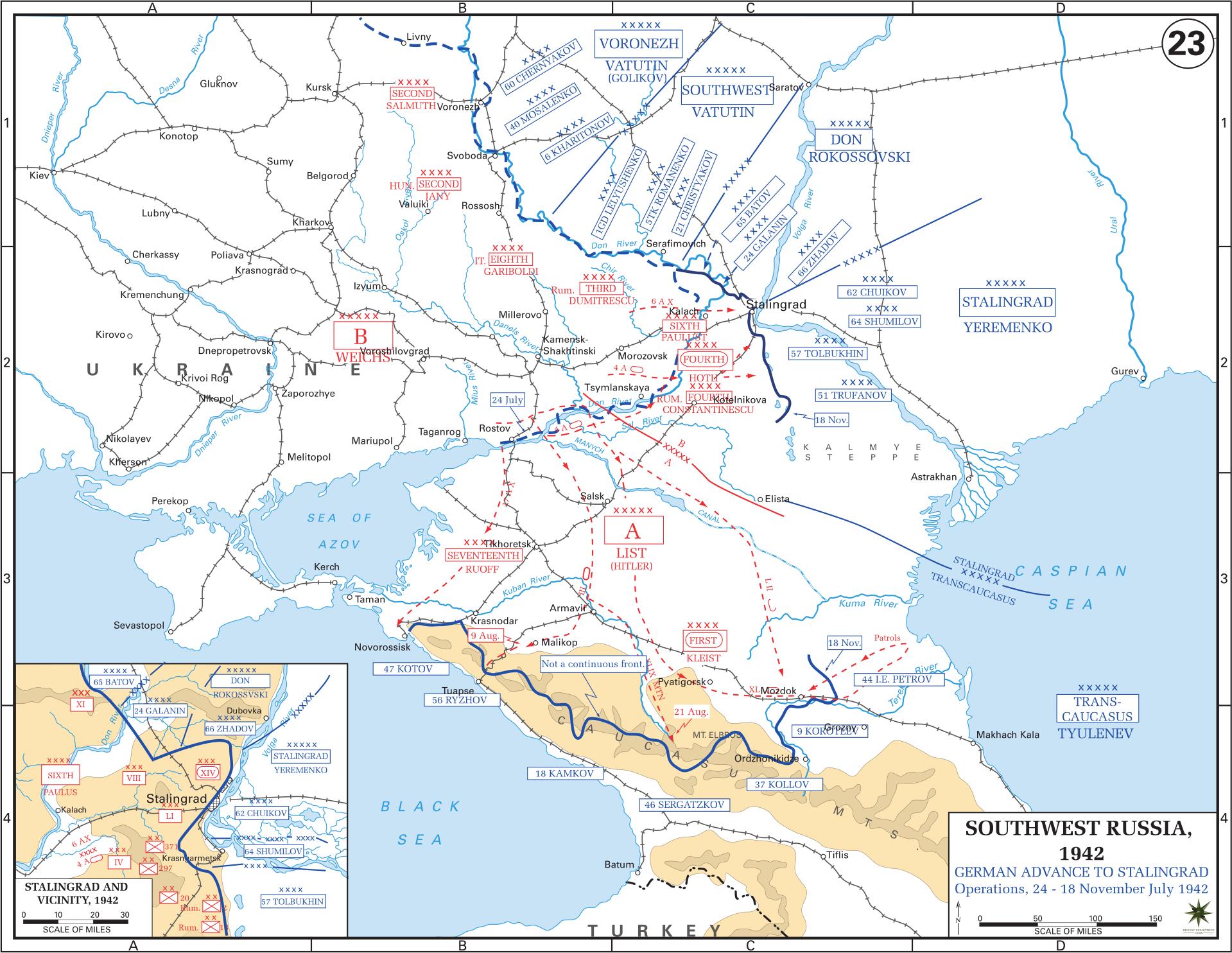 If this was considered, it has left no trace in written history.

It is not mentioned in the relevant volume of Germany and the Second World War (Volume VI/II, pp. 843-863, "The Decision for Operation Blue"), nor in Warlimont's memoirs (pp. 226-233 of Inside Hitler's Headquarters, 1939-45) or Doenitz's (Searched the whole electronic text, no mention of amphibious landings, nor anything related in the sections on early 1942).

There was, of course, a crossing of the Kerch Strait, but that was a fairly small operation. A major landing to seize the Caucasus by landing there would have been a completely different matter. It seems unlikely that the idea was considered seriously. The Germany Army had been educated in the preparations needed to stage a large seaborne invasion in summer 1940, in the preparations for invading Great Britain. It's a chancy business and requires a lot of resources. It also requires huge numbers of ships, and the Romanian Navy was much smaller and weaker than the Soviet Black Sea Fleet.

No, except across narrow Kerch strait

Considering all of this, Germans did not plan or execute amphibious operations except on a very small scale. During Operation Bustard Hunt in Kerch peninsula in May of 1942, Germans did some landings behind Soviet lines, which helped them to collapse Crimean Front. However , these were mostly company sized units, landings were few dozen kilometers behind front lines, and lasted only few days before they rejoined main German forces advancing from the west. This was realistically limit of German potential to conduct amphibious operations in this theater.

Second proposed operation was across Kerch Strait, which itself is not very large (3-15 km) . This happened in summer of 1942, with Germans occupying Crimea, and Soviets still holding Taman Peninsula on the other side of the strait. In this case, artillery from one side could support landing on other side, so it was not proper naval landing in strictest sense. Operation code name was Blücher, but even that was postponed because according to Soviet sources, aviation of Black Sea Fleet managed to destroy prepared landing craft and pontoon bridges . Germans finally managed to land some forces only in September of 1942, with loss of Novorossiysk already looming as land forces of Army Group A came from the north (from direction of Rostov).

Not the answer you're looking for? Browse other questions tagged world-war-two military nazi-germany soviet-union ww2-european-theater or ask your own question.

12
Did the Germans use a "Verdun"-like strategy at Stalingrad?
21
Could the Soviet Union have continued fighting World War II without Caucasus oil?
6
How (and why) did Hitler create "the world's largest traffic jam?"
6
Did the Germans attempt the easier or harder of two possible objectives in the Caucasus?
26
How did the Axis intend to hold the Caucasus?
5
Did the Germans "mix up" Army Groups A and B during Fall Blau?
11
Why did Fall Blau start at Voronezh instead of further south?
3
How secure was Germany's last foothold in the Caucasus in 1943?
1
How and why did the progress of Army Group A differ from what the terrain in the Caucasus might suggest?