Have historians attempted to reconstruct the polytheistic Semitic pantheon, dividing it into sub pantheons?

Please consider some of these reported findings of Biblical archaeology and Biblical criticism, from:

An example for a reconstruction theory I look for:

The Yahwism sect rejected any such pantheon, of course.

Have historians attempted to reconstruct the polytheistic Semitic pantheon, dividing it into sub pantheons?

This is an extremely complex question, but I think your question is somewhat undercut by the terminology you employed. Many of the locales you mention are not Canaanite. Akkad certainly was not Canaanite, nor indeed were even Edom, Moab, Ammon, the Amalekites, the Midianites (cf. nomads and perhaps Arabs), etc. Your question title says "Semitic pantheon" but your question mentions a "Canaanite pantheon" which is different.

If you meant to compare all the disparate Semitic pantheons you basically are just asking for comparative religion studies. Just because people groups belong to the same language family does not mean their religions are inherently linked. We cannot rule out autochthonous originations of gods specific to their locale. However, based on common functions and portayals of various gods in texts, iconography, etc. of course gods from different people groups have been compared and studied, and in some cases (as I will mention below about Egyptianization) some worship of gods are either borrowed from other cultures or the depiction of local gods are "bent" to conform to look like the gods of more powerful nations who vassalize a territory.

While I do not know of one all-exhaustive list of the various pantheons in the Ancient Near East (though there might be), I could select two examples centering around a god named Resheph.

Even within actual Canaan, gods within a pantheon sometimes get shuffled around and compete for primacy due to whatever driving factors cause the religion to evolve. Some religious studies have considered Resheph alongside Ba'al for example.

In The Iconography of the Canaanite Gods Reshef and Ba’al: Late Bronze and Iron Age I Periods (c 1500– 1000 BCE) by Cornelius Izak [Open Access PDF here], he compares Resheph (or Reshef) and Ba'al based on their similarity of being depicted as smiting gods.

He says (mentioning many other deities along the course of his discussion):

Reshef is usually shown standing, but in four cases he is shown sitting, identified by inscriptions in three cases. In contrast, Ba'al always stands. This is interesting as this excludes sitting figures as being depictions of Ba'al in the period under discussion. In the Ugaritic myths Ba'al is described as enthroned (eg in the vision of Ba'al -KTU 1.101 obv 1) and has a throne (KTU 1.4 I 33ff), but no example of such a representation could be found. Phoenician seals (Culican 19601961, 1968 57ff and Metzger 1985 pi 113:1184-1188; cf eg fig 31a) show the later Ba'al on a throne, but by then he seems to have got rid of his adversaries Mot and Yam and replaced Ilu as chief of the pantheon who is shown sitting (Pritchard 1969b no 493 and see now Yon/Gachet 1989), comparable to Mekal of Beisan (fig 1). ... One attribute which can distinguish between a human and a deity is the headdress, especially if this is shown with horns.1 Reshef and Ba'al are both shown with a high headdress or crown, mostly of conical shape and typical to the Egyptian white crown. It is fastened around the chin with a cord. However, there is sometimes a difference between the Asiatic and Egyptian type of crown. The Asiatic type is more of a cylindrical and conical form without the typical point of the Egyptian white crown. There may also be exceptions: Reshef is shown with a band across the forehead (see table 5), and Ba'al with a "cylindrical hat", or with the blue crown of Egypt or the double crown.

Mekal has sometimes been identified with Resheph, and this paper apparently considers whether Resheph and Ba'al are essentially the same. If those identifications were correct (Izak seems to think otherwise though), one deity (in this case) would be essentially have gone by three different names.

On page 113 he equates Nergal with "Canaanite Reshef", showing an equation across pantheons perhaps along the lines of what you are looking for.

Although the Canaanite deities Reshef and Ba'al are both represented as so-called «smiting gods», their iconography is much more complicated and varied. This publication presents a catalogue of representations of Reshef and Ba'al in the Late Bronze and Iron Age I periods (c 1500 -1000 BC). lt deals with different motifs: «the menacing god», «the standing god», «deities on animals» and «the monster slayer». Photographs of the originals are included, a full catalogue description is given and the iconographic attributes are compared and discussed. It is concluded that the iconography of the deities under discussion can be distinguished according to their different attributes and functions. It is established that Reshef carries a shield and is the protector of individuals' life, while Ba'al holds a plant and, as the bearer of life, has royal and cosmic connections. (Page 396)

Thus even similar gods can be distinguished when carefully scrutinized.

Okay, you might say, but what about gods worshipped across different regions (as mentioned in the OP)?

Actually, my example of Resheph was chosen because of the widespread worship of that deity. Consider this second source from The God Resheph in the Ancient Near East by Maciej M. Münnich [PDF here]:

In this work the author’s aim is to depict an incredible portrait of a widely worshipped deity in the ancient Near East by the name of Resheph. In depicting this portrait one should define the time and place of the worship of this god as well as his character, attributes, attitude towards other deities and the popularity of his cult. All the available Near Eastern texts mentioning Resheph will serve as a source foundation. These will include not only the sources from Elam, Mesopotamia, Syro-Canaan and Anatolia but also from Egypt and the colonies in Cyprus, Africa and Europe, inhabited by the Phoenicians, even if they are located geographically outside the territories of the Orient. Therefore, this work is a monograph concerning the cult of a given deity, typical for the research on the history of religion. As we are, however, dealing with sources that are spread both chronologically (from the third to the first millennium BC) and territorially (from Carthage to Elam) we cannot collect these sources mechanically and depict one single portrait of the deity on this basis. As P. Xella emphasised it correctly, “Acting this way, we begin a historical flattening leading to the creation of artificial divine figures that have never existed as such.”1 Having various sources we must first analyse the data of particular lands, ordering them from the oldest to the latest. Thus we will receive detailed pictures concerning the cult of Resheph at Ugarit, in Egypt, Phoenicia, Israel, etc., and these pictures will not be static but will change together with the period analysed. They will be supplemented by other elements from the earlier analysed authors of the iconographic sources. (Page 1)

Not only that, but in Canaan we also see instances of "borrowed" gods. In the Egyptian New Kingdom, both in the Amarna period and early Iron Age, many of the city-states and nations were vassalized and ended up worshipping Egyptian or Egyptianized (in how they were depicted in iconography) gods. See my response here about whether Israel's neighbors were henotheistic and the example of the clearly Egyptian (or Egyptianized) gods in the Moabite Balu'a Stele and evidence of an Egyptian shrine or temple in Jerusalem.

When it comes down to it, comparative studies of deities happen all over academic publishing and the best way to dive in is to pick a study and look at the resources it cites in its footnotes and bibliography which can send you to further sources. You can occasionally also find more high-level text books that are more introductory and provide an overview of ANE religions.

One example that may be worth consulting (though I'm not approving its assessment or content, and I think it had a skeptical view of the Hebrew Bible in my estimation) is Gods in the Desert: Religions of the Ancient Near East by Glenn S. Holland which compares deities across the ANE. That is one of many examples which you will inevitably find if you look into intereligious studies and the ANE. 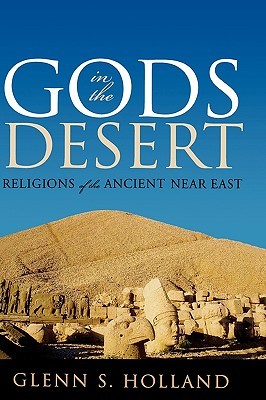 Moreover though, I think your question assumes a perspective that is too westernized (as in Ancient Greek or Roman).

Canaanite region religions that arose had relatively few major gods. Three (3) was quite common, a triad (that influenced early Christians to adopt the holy trinity): usually one male, one female, and one child.

A formalized pantheon is unnecessary with so few gods. This is contrasts with a dozen gods in Roman or Greek pantheons. The imperial nature and designs of those two empires (that sought to standardize, control, and expand over vast regions) were well-served by more formalized structures to train and assimilate new populations.

61
Which came first: polytheism or monotheism?
39
What is the historical basis for the Exodus?
11
How much contact did Sub-Saharan Africa actually have with the rest of the world since the beginning of civilization?
12
Was Yahweh a god in a possible Edomite Pantheon?
3
Who were the first leaders of the Yahwistic sect?
2
Is there a reconstruction for whom and when were the peoples of the ancient Levant just before Israel, Judea and Edom?