What was the relationship between Angles, Saxons, and Jutes; and the Vikings? [closed]

Ask Question
Asked 11 months ago
Active 11 months ago
Viewed 781 times
5
Closed. This question needs details or clarity. It is not currently accepting answers.

I'm reading Seamus Heaney's translation of Beowulf and I cannot get my head around how Angles, Saxons, and Jutes relate to the Geats, Danes, and/or the Vikings and/or the Scandinavians generally.

From what I can gather the Jutes occupied the exact land later occupied by the Danes. And the raid on LINDISFARNE was in 793 where the Anglo-Saxons seem to have been shocked by the existence of these Northmen.

Meanwhile, it appears that Beowulf was written sometime between 700 and 1,000 AD. And, if I understand it correctly, the story is written in Old English, which is the same as Anglo-Saxon, but the story seems to be about the lands we now call Sweden and Denmark. Is the story about Angles, Saxons, Jutes or Vikings?

So, what is the relationship between all these peoples? Were Angles, Saxons, and Jutes Germanic peoples who were pushed to migrate by expanding Scandinavian pre-Viking (or just plain Viking) peoples? Are all these distinctions just historical markers that really should be looked at as a continuum?

So, I've been poking around trying to find books, articles on the subject and discovered a group called the Gutes; who, according to the Wikipedia entry, are the same as the Goths. Isn't that awfully linguistically similar to the Jutes? Were some of these "Germanic" tribes like the Jutes and/or Gutes conquered by their Scandinavian neighbors? Was it like Norman England where a small elite took control of the same population and was subsumed, but left a big linguistic footprint?

The short answer is we're not sure.

When the Roman State was in decline and had to withdraw from England, (coincidentally?) Germanic tribal power was on the increase. That left a power vacuum in England at the same latitudes that coastal Germanic tribes were already living on the opposite shore of the North Sea. Unfortunately, it also left a literacy vacuum, that was not filled until the Anglo-Saxons were converted to Christianity hundreds of years later.

As for who they were, for the Angles and the Jutes, we really only have two things to go by: Bede and Linquistics.1. Bede was likely using the names in use in his day, but those names ultimately may or may not have been geographic rather than uniquely descriptive. The following map is a depiction of Bede's account: 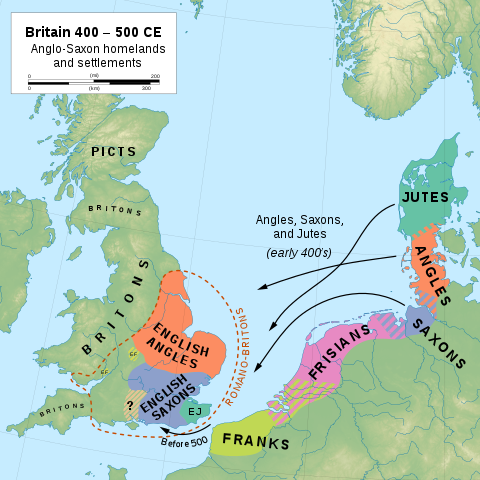 The picture we get when we look at this linguistically is that the tribes on the European North Sea coast appear to have been part of a coherent linguistic grouping we call North Sea Germanic, or "Ingvaeonic". It seems quite likely that this started out as a coherent culture of Germanic tribes that specialized in living on the North Sea coast, and primarily communicated with each other via sea travel.

North Sea Germanic eventually split into Old Saxon, Old English, and Old Frisian, but that was in the future. In the 400's it was likely just a single language with different dialects used by the different speakers on the North Sea coast from the Dutch lowlands to the Jutland peninsula. With that distribution, it wasn't a great jump for a maritime people to hop the channel and plant tribes over there as well. 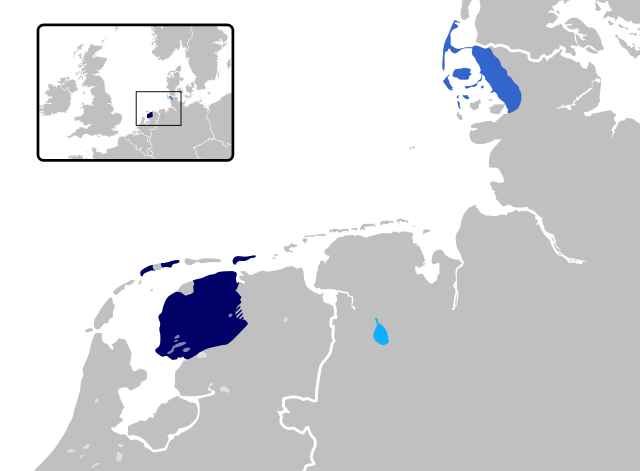 To someone who's seen this kind of linguistic map before, this strongly implies that at one point their ancestor language existed in an unbroken continuity in an area encompassing all of these areas (plus some indeterminate amount more of course). This includes the area Bede said the "Angles" came from.

Its tempting to call all the people in this entire area "Frisians" but that would be anachronistic, as Old Frisian (and old Saxon) was still 400 years in the future.

Now the Vikings came later, speaking Old Norse. This was a language from the North Germanic branch, while the North Sea Germanic languages are instead from the West Germanic branch (you can perhaps see here why some prefer to call them "Ingvaeonic"), along with German and Dutch. Both Beowulf (a Geat), and Hrothgar (a Dane) would have been North Germanics, speaking Proto-Norse, which at this early date may well have been understandable by West Germanic speaker. Norse-speaking tribes started moving into the Jutland peninsula via Zeeland sometime around the Anglo-Saxon movement. Likely they were taking advantage of the power vaccuum left by the departing "Angles and Jutes". How active of a hand they had in that departure, we don't know. However, it wasn't until about 300 years later that the Viking age proper began, and that's when these new "Danes" started making serious attempts at conquering England themselves.

Both Beowulf (a Geat), and Hrothgar (a Dane) would have been North Germanics, speaking Old Norse. The story was set around 700 AD.

1 - There were some classical sources talking about Germanic tribes with similar names, but its not clear they were talking about the ancestors of these same tribes. Also, Bede likely relied on Gildas for some of the relevant information.

Not the answer you're looking for? Browse other questions tagged england vikings anglo-saxons scandinavia or ask your own question.

3
Why did Danish people not “connect” with neighbor nations until Viking Age?

17
What would be accurate illustrations of vikings and viking culture?
6
Did barbarians capture monks or priest of civilized kingdoms to teach them?
5
Vikings: The sagas of Ragnar Lothbrock and his sons
18
Why were Germanic languages able to spread over much of northern Europe after 500BC? Did they mostly replace Celtic?
12
Why are Vikings singled out for raids in Britain and Ireland when records may indicate most raids were by local rulers?
6
Is there a genetic link between North America and Vikings?
6
Why does the name “England” hold no reference to the Saxons?