What was the reason for Soviet troops to withdraw from Yugoslavia in World War II?

For all these countries that the Red Army entered (Poland, Romania, part of Germany, Czechoslovakia, Hungary), the procedure was straightforward. Once the Soviets beat the Germans they become de facto occupants and could establish a government of their choice.

With Bulgaria it was a little bit different. Once it became clear that the Red Army offensive would enter their country, local communists swiftly executed a coup d'etat, which was obviously not opposed by either the Bulgarian public or the USSR. Even so, they still went under Soviet control.

In Yugoslavia, they had their own socialist government. However, since 1948 Yugoslavia was independent from USSR. As much as it is questionable if they were a part of the Eastern Bloc, they surely weren't under USSR power like the rest. (Albania had some similarities, also being independent since 1961. Albania was geographically separated from the Eastern Bloc in that it only bordered Yugoslavia.)

Somehow, it never occurred to me that the Red Army did enter Yugoslavia, and did take a major part in liberating the capital in 1944. What were the reasons for completely withdrawing their troops, and when did it happen? It is so unlike Stalin to do something like this. He could leave at least a few rear units and try to influence, if not control, the situation later. This would repeat the usual scenario that had played out previously. The West could object, but surely they wouldn't bring their own troops to Yugoslavia to escalate conflict, especially since everyone was still facing the Germans. It seems that it is somewhat exceptional that Yugoslavia was handled this way with respect to all the other countries where the Red Army "dropped by".

world-war-two ww2-european-theater yugoslavia
Share
Improve this question
edited May 19 '20 at 4:46

Part of the story is probably the Percentages agreement between Churchill and Stalin, from the Moscow Conference in 1944. 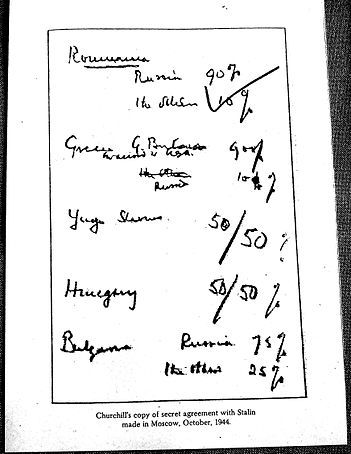 It was amended later for Hungary. Wikipedia further writes:

If this agreement was true, then Stalin did keep to his promise about Greece, but did not keep his promise for Romania, Bulgaria, and Hungary, which became one-party communist states with no British influence. Yugoslavia remained a non-aligned state in line with the Percentage agreement, though it was a one-party communist state, with very limited British influence. Neither did Churchill keep his promise about Greece, which became a one-party junta with no Soviet influence. Britain supported the Greek government forces in the civil war but the Soviet Union did not assist the communist partisans.

As the article also notes, this version has been disputed. But it might be the case that Stalin was wary that he could't take everything and get away with it.

There were a couple reasons. The first was that Tito basically represented "a government of their [Soviet] choice". The second was that Tito showed that he could "take care of himself".

Josip Broz Tito had started with the Russian Communist Party as early as 1917. When "Russia" became the Soviet Union, he was a member of the Soviet Communist party and secret police, before he went back to Yugoslavia. He was highly regarded among Soviet and East European Party members. Essentially, Stalin couldn't find a "better" Communist.

The other reason is that Tito had led the resistance movement beginning in 1941, right from the beginning of the German occupation. He even established a short-lived "Republic" later that year. Given that he was able to keep part of Yugoslavia "independent" of the Axis, he could do the same, if necessary, vis-a-vis Stalin, who preferred to have Tito "nominally" under his control, than an open enemy.

The Soviet troops withdrew from Yugoslavia late in 1944, en route to fighting German and Hungarian enemies, and after securing some (logistical) support from Tito.

The Soviets only had a small presence in Yugoslavia, during the capture of Belgrade where they only had an assisting role - Tito's Partisans proved more than capable of defeating the Nazis on their own. The troops in Yugoslavia, the 2nd and 3rd Ukranian Front, were needed elsewhere, and so were redeployed to Hungary once it was clear the Yugoslavians had things well in hand.

The Wiki article on the Tito-Stalin split has some more background on how Yugoslavia avoided becoming a satellite state of the Soviet Union.

As a consequence, the Soviets had heavy casualties during the street-to-street fighting with retreating Nazi troops. Once when Belgrade was liberated, the Soviets installed heavy artillery on the banks of Danube from which they started shelling of Zemun, the Croatian city ruled by the pro-Nazi Croatian Ustaše. The Russian statement of proclaiming Croatia an easy campaign led to the complete devastation of Zemun. In order to preserve the rest of Croatia from Soviet shelling Tito thanked Soviets for their help and asked them to leave the liberation of Croatia to his partisans troops.

It has nothing to do with percentages, but with agreement between Yugoslavian communists and Soviet communists.

Tito was in contact with Comiterna throughout the war and when Soviets came to Yugoslavia. That was in fact the only allied territory, unlike all others who fought against them in one way or another. British absolutely didnt have a say in post war Yugoslavia. We can see evidence from Churchill's change of attitude towards Tito and Trieste crisis.

Even before the war was officially over, there was an incident where British sailors and SAS were trying to interfere with Partisan advance through Istrian peninsula. Partisans arrested them and immediately all aid was suspended. Tito didnt forget that both Soviet, GB and USA supported the official Yugoslavian government in exile (Soviets politically, GB and USA politically and materially). Soviets really didn't have to leave any troops in Yugoslavia since it was allied in true sense of the word. In any event both east and west were played by Tito who actually successfully established Yugoslavian national liberation movement without any help from outside. And because they did it by themselves they owed nothing to anyone.

Question:
What was the reason for Soviet troops to withdraw from Yugoslavia in World War II?

Short Answer:
Unlike most of Eastern Europe, Yugoslavia had a significant army which gave it the option of independence after the war. It's true though that because the Yugoslav Communists were close allies of the Soviet Union with their ideology branching off the Soviets; there was no reason to impose a Soviet Style Communist regime during the war because that was Marshal Tito's plan from the beginning. Stalin and Tito fell out after the war when Stalin tried to dictate to Tito in 1948. Mostly on Foreign policy.

Yugoslav Partisans
SFR Yugoslavia was one of only two European countries that were largely liberated by its own forces during World War II. It received significant assistance from the Soviet Union during the liberation of Serbia, and substantial assistance from the Balkan Air Force from mid-1944, but only limited assistance, mainly from the British, prior to 1944. At the end of the war no foreign troops were stationed on its soil. Partly as a result, the country found itself halfway between the two camps at the onset of the Cold War.

When Stalin tried to dictate Yugoslavia's foreign policy after WWII, in 1948, that's when Stalin and Tito had a falling out. Yugoslavia did not join the Warsaw Pact and in 1948 Tito blocked Russia from supporting a Greek Revolution siding with the West. (the Greek red army collapsed when Tito refused to permit Stalin to resupply them through Yugoslavian territory). Tito also broke with the Soviet Union over the Marshal Plan. Yugoslavia was the only communist country which participated in it. Throughout the cold war Yugoslavia benefited from aid from both the Soviet Union and West.

17
Why didn't Stalin use force to bring Tito into line?

9
Did it matter that the Red Army clung on to Stalingrad's West bank in 1942?
14
How did Allies secure southern flank during “Race to the Rhine”?
9
Was the Soviet Union in 1945 seeking to capture German soldiers and civilians, or drive them west?
11
Did Tito back the Bulgarian anti Communist Goryani resistance movement?
3
Why were Red Army Officers and soldiers not prosecuted for War Crimes in WWII?
4
Did the defense of the Brest fortress make sense?
8
Where can I find documents from the Nuremberg trials about war crimes of the Wehrmacht in the Soviet Union?
5
What was the strategic importance of Moscow to the Soviet Union in Dec 1941?
4
Was the 1939 Red Army more disciplined / better behaved than the 1943-1945 Red Army?